Trials don’t kill you. How you handle them is what makes or breaks you.

I was late. Like not late to a meeting…late. You know what I mean…

I really thought nothing of it until one night I started feeling terribly sick. That was the night before my best friend, Erin, was coming to visit. I picked her up from the airport, and that day, I told her I thought I may be pregnant. We just enjoyed our time together and didn’t focus too much on the thought. When we got to my apartment, we bought a pregnancy test, and I had no doubt that it was going to be positive. I wasn’t shocked when it was. I came out of the bathroom and told her the news. She hugged me, and we cried for a while. I know that God orchestrated the timing of her visit, because had she not been there, I would have fallen apart. I called my ex-boyfriend and told him the news. He wasn’t shocked or mad or anything, really. He hardly showed any emotion. He said are you sure and okay…that’s about it.

The next day, with Erin holding my hand, I called my mom to tell her the news. I cried as soon as she answered the phone. I finally choked out the words “I’m pregnant.” I could tell she wanted to cry, but she stayed strong for me. She reassured me that everything was going to be okay. The hardest part of that conversation was being a disappointment to my mom.

I stayed sick the majority of my pregnancy. I visited West Virginia, my home state, on my breaks from school in Dallas and kept in some contact with my ex-boyfriend. My mom was sure to keep them in the loop, though. My mom sent texts to my ex’s mom after every appointment, and I sent pictures of my growing belly. After a while, I got back together with my ex. The relationship was strained, though. I was still in Texas trying to finish school, and he wouldn’t move again. At times I felt really alone. My parents were great, and my church friends practically adopted me as their own. Still, the one person I needed for support wasn’t there. I couldn’t understand why he wouldn’t move to be with me now that I was pregnant with his baby. I’m not sure I’ll ever understand that.

My little girl was due in January, so I took the winter semester of school off. I finished almost all of school, so I had only one more quarter to go after I had my daughter. My parents sold their house in West Virginia and moved to Texas in December of 2011. I will never be able to thank them enough for that huge sacrifice. I moved in with them, and then it was a waiting game. Things got worse with my boyfriend, and I had no idea why he was so mean to me. I later found out he was cheating on me; should’ve seen that one coming.

During the latter part of my pregnancy, I started becoming closer and closer to God. I went to Embrace Grace, a group for young single and pregnant moms, and started building relationships with other girls just like me. It was really a God thing.

I had a really difficult time with judgment. I tried to act like I didn’t mind what people thought of me, but the looks and whispers I got on a daily basis cut me so deep. I felt so dirty and ashamed. I’m so thankful to say that church was the one place I could go and receive no judgment. Instead, strangers would touch my belly and ask what I was having. I was around the worship team a lot because of my friends, and those people were the biggest blessing. They would tell me how beautiful I looked or ask me questions about the baby and how I was. To me, that was crazy. I had obviously done some not good things, and all they saw was me – not my sin, but me. I wanted to be at church every minute because of the positive environment.

On January 17, 2012 I woke up feeling rather odd. Through the day, that odd feeling turned to uncomfortable to I can’t breathe. I didn’t want to go to the hospital because I didn’t want to be the girl that went and wasn’t really in labor, and after all I still had two weeks until my due date. After nagging and nagging, I finally listened to my mom, and my mom, my dad, and I drove to the hospital. Once I got there and got checked, they said I was in labor. Strangely, I wasn’t nervous at all. I was ready to go and ready to meet my daughter. That was at about seven in the evening. My mom called my boyfriend and told him what was going on. He booked the earliest flight out the next day. I relaxed and slept some while I waited for my nugget to arrive. (Oh, also I had drugs, so I was totally fine…I’m not superwoman.) Around 3:30am the nurse came in a checked me and said, well, you’re having this baby now.

In the room were my mom, my doctor, and my nurse. It was such a non-stressful environment. On January 18, 2012, at 3:42 am, I was holding my beautiful Layla. It was such a weird feeling. I was holding my daughter, my human. She was literally mine. If you don’t have kids, you won’t understand this, but the amount of love I felt in that moment surpasses any emotion I’ve ever felt. She was perfect.

I lay in my recovery room with my baby on my chest for hours. A few visitors came in and out to see her. My boyfriend finally got there and saw Layla. I was so happy. I was exhausted but just didn’t want to sleep. All I wanted to do was stare at her and lie with her, so that’s what I did. My boyfriend was there for three weeks after she was born. We mended our relationship, and things seemed to be perfect.

For the next couple months, I got to stay home and be with my daughter all of the time. It was fantastic. I went back to school in April and graduated in June with my degree in photography. My boyfriend and I were having problems. Really, we only dated on and off. It came down to the fact that he wouldn’t move to be with his daughter.  It was hard enough that I wasn’t enough but even worse that my daughter wasn’t, either. I pray she never feels that way.

Daily I have to give my worries over to God. Will she grow up with a dad? Will her biological dad hurt her? Will he be in and out of her life? Will he ever man up? I can’t lie and say it’s easy. If you’re a parent, you understand how much you want to protect your children. I’ve learned to give it to God, but yes, I still struggle.

Through this whole experience, I’ve grown so much in the Lord. I’ve learned to let him be my husband and take care of me and my daughter. I’ve learned to give every burden from finances to sickness over to him. I’ve never been more happy than I am now. Of course, I still have rough days or angry emotions towards my ex and his family, but overall, God is my provider and protector. He loves his princess and her princess. I’m in a place I never even knew existed.

It’s hard being a single mom. I want nothing but to be with Layla all day instead of at work, but I’ve been blessed with a job so I can provide for myself and my daughter. I get tired and frustrated, but I love my life. I have an incredible support system of my family and close friends. I never imagined I would be a mom so soon, but I absolutely love it. It is the coolest thing. I’m so thankful God trusted me with one of his children. I know there will be easy and tough times ahead, but I know that no matter what, I’ll always have a God who loves me and a daughter I adore.

Trials don’t kill you. How you handle them is what makes or breaks you. I ran to God, and he restored my life and my heart. I’m not the stereotypical young, single mom you hear about or watch on TV. I’m the young, single mom that strives after Jesus and is determined to share her story with others. I pray God uses my story to affect others, and I have no doubt that he will.

Don’t give up. He loves you. This isn’t the end; it’s just the beginning of what God has in store for you. 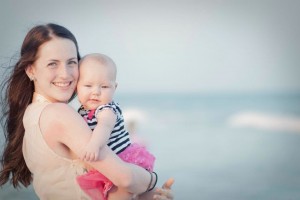