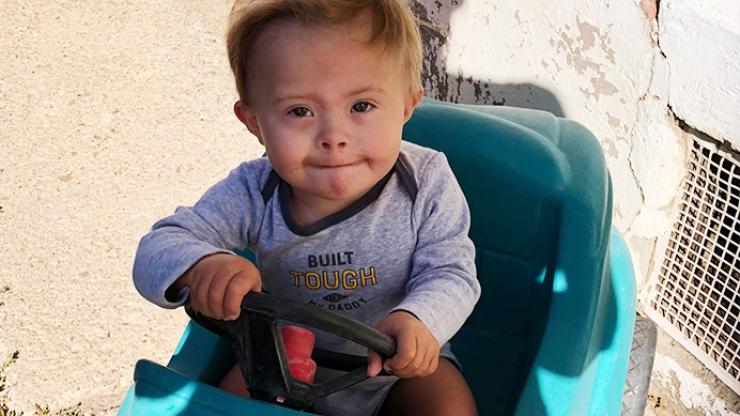 (Pregnancy Help News) When Misdy became pregnant in March 2016, she was shocked. Enduring a tough chapter in her marriage and already a mother of six, Misdy couldn’t imagine having another baby.

Her youngest had just started full-time school and Misdy herself had just gotten a job. But she knew she wouldn’t be able to afford daycare, and the thought of raising another baby overwhelmed her.

But sitting in the Planned Parenthood waiting room, she was flooded with guilt thinking of her neighbor who had been trying to conceive for years. Reassuring herself, she pushed the guilt away and made an abortion appointment.

Still, the thought of her neighbor kept popping into her mind. She finally decided that if she just went through with the abortion, she could put her mind at ease.

Misdy went ahead and took the first pill in the chemical abortion regimen—and regretted it right away.

“I went into the bathroom immediately (and) tried to throw them up,” she wrote in a reflection. “The drive home, I was just sick about what I just did and the thought that I was actually killing a baby with a heartbeat inside me. I went home and just cried and cried and knew I needed to seek help.”

She called the organization’s 24-7 helpline (1-877-558-0333) and was put in touch with a doctor who helped her begin the Abortion Pill Reversal treatment by prescribing her progesterone, a natural hormone that is necessary to sustain a healthy pregnancy.

READ: Boy with Down syndrome steals royal hearts in Australia

Otherwise known as the “abortion pill” or RU-486, chemical abortions involve a two-pill regimen. Mifepristone, the first pill which Misdy took, destabilizes a pregnancy by blocking progesterone receptors and reducing progesterone levels in the mother’s blood. The second pill, typically misoprostol, induces labor, forcing her body to expel the baby.

Reintroducing progesterone to the mother’s body up to 72 hours after the first pill is taken counteracts the mifepristone, restoring her body’s natural ability to carry her baby.

Heartbeat International, which took the reins of the protocol’s 24-7 helpline and provider network this spring, recently announced that Abortion Pill Reversal has led to the births of more than 500 babies, with another 100 on the way.

The American College of Obstetricians and Gynecologists (ACOG) has said that mifepristone does not appear to cause birth defects. Nor does progesterone. In fact, progesterone has been safely used in pregnancy for over 50 years with FDA approval. Not only that, studies have found that the birth defect rate in babies born after the Abortion Pill Reversal (2.7 percent) is no greater than in the general population (3 percent).

The same is true for the risk of preterm labor, in which case the delivery rate for babies born after Abortion Pill Reversal is 2.7 percent compared to 10 percent in the general population.

Still, when challenges arose during her pregnancy, Misdy began to feel guilt creep back into her psyche, despite doctors’ assurances.

At 19 weeks, her baby was diagnosed with Trisomy 21—Down syndrome, the most common chromosomal condition in the U.S.

That’s when one doctor suggested Misdy go back down the dark path she had already roamed and attempt to abort her child a second time.

“My first thought was, ‘You don’t know how hard it’s been to stay pregnant,’” she wrote. “How could I even think of doing it now? He was a baby with hands and feet and a heartbeat that I got to see once a week on ultrasound.”

Recommendations to abort are fairly common among medical providers around the world, with studies showing that somewhere between 67 and 90 percent of babies diagnosed with Down syndrome are aborted. In countries like Iceland, that figure is close to 100 percent. Such grave statistics have sparked legislative efforts as well as educational campaigns to protect babies with disabilities from discriminatory abortions.

While the cause of Down syndrome is unknown, the Global Down Syndrome Foundation says it has nothing to do with anything the mother or father did during pregnancy; it is chromosomal.

“There is nothing wrong with my baby.”

At 31 weeks, Misdy went into preterm labor and gave birth to her baby boy, Tig Lee. Weighing all of 3 lbs, Tig had to have two major surgeries as a newborn.

READ: Mother of child with Down syndrome laments abortion: It ‘alarms my heart’

Although Misdy was overjoyed with her child, challenges continued to mount for her.

When Tig was six weeks old and still in the NICU, Misdy’s husband passed away, leaving Misdy a widow and her seven children fatherless.

“It was a hell no one should ever have to go through!” she wrote, adding that the first year with a newborn became a matter of survival for her and her family.

Yet despite the trials and heartache of the last two years, Misdy continues to see a purpose in her experience and her child’s life.

“I know now that Tig was sent here to me for a reason,” she says. “He is the light and the best baby ever. He puts a smile on my face every single day! It’s not easy having to raise all my kids on my own, but I do it. I just hope other women really think before they decide to do the abortion pill, but if they do and they feel like it was the wrong decision I hope they know there is help. There’re people who care and will help you.”