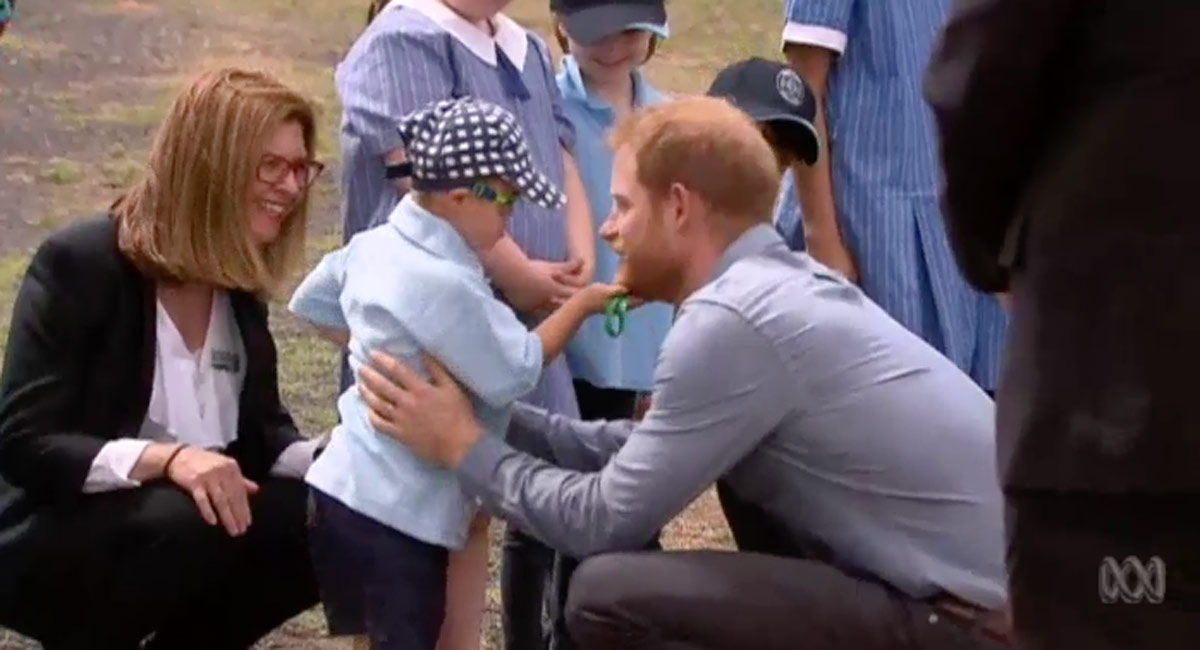 The Duke and Duchess of Sussex, Prince Harry and wife Meghan Markle, are currently in Australia on a royal tour. When they landed in Dubbo, located in New South Wales, they were greeted by a group of fans eager to meet the two — but it was one little fan with Down syndrome who has stolen not only the royals’ hearts, but the hearts of people around the world.

There was a line of schoolchildren waiting to greet Prince Harry and Duchess Meghan, who took their time to speak with each of them. Getty photographer Cameron Spencer, who was there with the royal couple, explained what happened next. “At the end of the long queue was young Luke Vincent,” he said. “He embraced Prince Harry with the warmest affectionate hug, and then did the same with Meghan. It was a special moment, the newly announced parents-to-be appeared emotional, and it was a real, candid, unexpected encounter that sums up why the royals are so popular with people.”

Vincent inadvertently broke royal protocol by touching the royals, but they hugged him back, and Prince Harry allowed him to stroke his beard and pat his head, smiling and holding his waist as he did.

Vincent’s principle explained that he loved Santa Claus, which is why he was so fascinated with Prince Harry’s beard. “Luke’s thing is Santa Claus,” Anne van Dartel said in an interview with People. “And so as soon as he saw it [Harry’s beard], we went into the panic mode because he’s touching a member of the royal family! And he continued to do it. And he hugged him. So what you and I can’t get away with, my beautiful friend can.”

READ: Trump: We have a ‘duty to protect and defend’ lives of people with Down syndrome

She added that Prince Harry was relaxed and welcoming towards Vincent’s affections. “He said ‘Hello young man.’ And Luke just said, ‘Hello Harry.’ And Prince Harry graciously realized that his language is limited,” she recounted. “And he introduced him to his wife and said, ‘She would love a cuddle too.’ And he said, ‘Luke will you please give my wife a hug as well?’ So young Luke handed flowers to the duchess and then she said, ‘I would love a cuddle’ so in he went. And then he went back to Harry and then gave him another big cuddle. The man with a beard. And that is him. That is the beauty of Luke.”

She also explained that Vincent didn’t realize that he was meeting a prince. “He just thinks he met a nice man today. Who had a lovely beard. Luke’s a man of very few words, but very lovely actions. What he can’t express in his words, he expresses in his actions,” she said. “I was explaining to Prince Harry about Luke’s infatuation with beards and Santa Claus and he just laughed and said, ‘How wonderful.’ So he introduced him to his wife. She said something along the lines of ‘Oh, what a beautiful little boy.’”

The moment with Vincent has people around the world awestruck, but it has particularly struck a chord with Down syndrome families. Prince Harry and Duchess Meghan happily accepted Vincent for who he was, which is the goal for people with Down syndrome everywhere: to simply be accepted, for who they are.