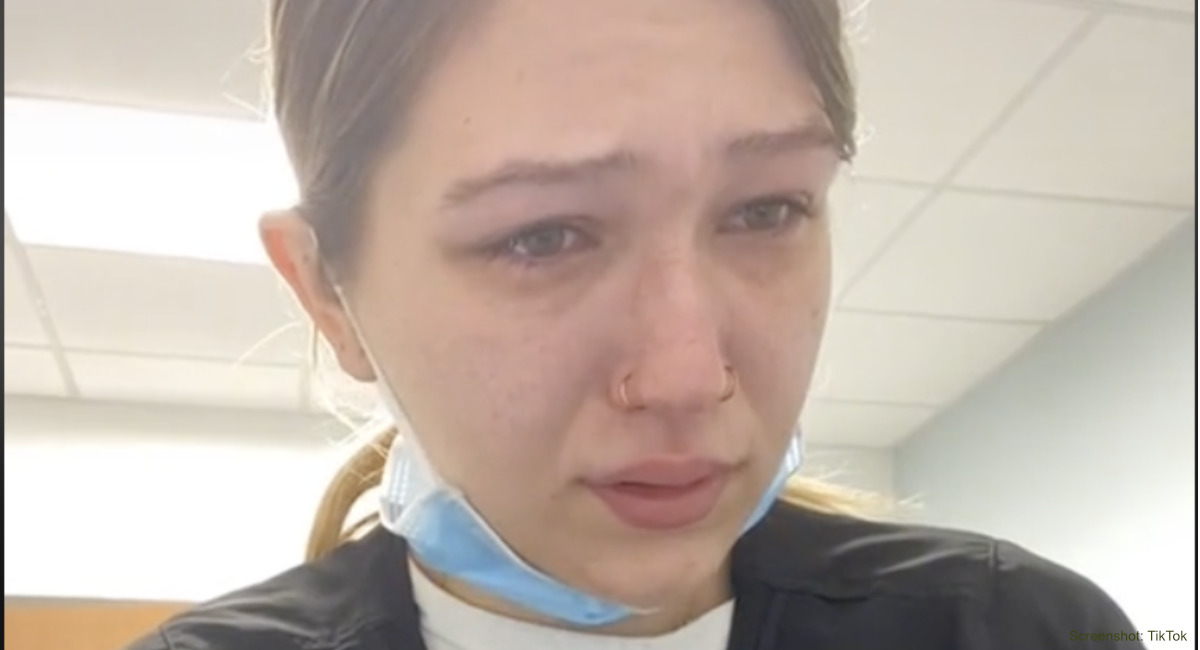 A first-time Pennsylvania mother is drawing national attention to the issue of paid family leave after sharing a deeply emotional TikTok about returning to work when her newborn daughter was just 12 days old.

Rebecca Shumard, 26, headed back to work as a medical assistant less than two weeks after daughter Eden’s very premature arrival 13 weeks before her due date. With minimal paid maternity leave, Shumard opted to save the little time she did have for when Eden was discharged from the neonatal intensive care unit (NICU).

A now-viral video from December of 2021 shows a visibly distraught Shumard during a break at her job, with the accompanying words: “POV, you have to return to work 12 days after having a premature baby at 27 weeks, so that when she is eventually discharged from the NICU you can spend what little maternity leave you have with her.” The next screen reads, “You try to pump at work every three hours, but they’re understaffed. Your milk supply is diminishing at eight weeks postpartum,” and asks the heartbreaking question, “Will you even have milk available when she gets home?” The video text continues, “What do other NICU parents do? How can anyone afford to stay home during a NICU stay? How can anyone handle the guilt when you have to work and can’t be with your baby?” before concluding “This. Is.America.”

Shumard’s story is shining a spotlight on the lack of mandated paid family leave in the United States, even as the Family and Medical Leave Act (FMLA) ensures 12 weeks of unpaid job protection following the birth, adoption, or initiation of foster care for a baby.

Live Action News previously addressed paid family leave and its benefits to moms and babies. Research suggests that “increases in paid parental leave were associated with drops in perinatal, neonatal, post-neonatal, infant, and child mortality,” and conversely, “[p]arental leave of less than 12 weeks… is associated with increased maternal depression, anxiety, stress, and marital instability.” Shumard’s case puts a face to this last point, as she herself suffered from postpartum depression due to the stress of her daughter’s premature birth and ongoing medical needs, plus the necessity of returning to work so soon.

And the fallout from a lack of paid family leave likely hits minority communities hardest. OB/GYN Dr. Jennifer Lincoln commented, “It is no secret that a huge maternal morbidity and mortality gap exists in the United States, with BIPOC and economically disadvantaged birthing people being hit hardest. These are also the same groups that often lack paid leave and would be the ones to most benefit from it.”

While Shumard technically counted as one of the few women who had six weeks of paid leave available through her work, she pointed out that for parents of babies with complications, that leave may end before the child is even discharged home from the hospital.

Even if all had gone well, six weeks is a comparatively short time to adjust to life with a new baby before returning to outside responsibilities like work. Shumard said that even before Eden’s premature birth, “My expectations of maternity leave were, this is the time to spend with your baby, and it’s going to be obviously a learning curve. You spend those short six weeks with them, if that’s what it is that you get, and during that time you are creating a schedule that works for the baby that changes daily, hourly. So those six weeks turn into minutes real quick.”

In Shumard’s case, the kindness of complete strangers made all the difference. In addition to filling an Amazon wishlist for Shumard and baby Eden, the financial generosity of people who watched her TikTok video led to enough donations to extend her leave all the way through April. Eden came home on December 23, 2021 after more than two months in the NICU.

The grateful mom said, “I don’t know how to really just get across how thankful I am. I have to really share that with everyone on TikTok. It’s a platform that I’ve seen do this for people.” She concluded, “And, like I said in the other video, it shouldn’t. It shouldn’t have to. That shouldn’t be the job of these people, but they have changed my life.”