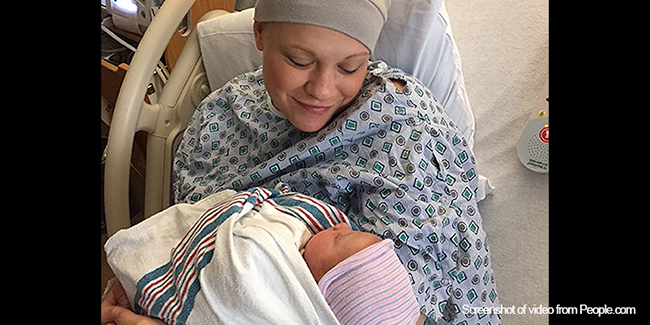 For many women, ovarian cancer is one of the most terrifying diagnoses they could ever receive. The cancer is a silent killer, with difficult-to-recognize symptoms. When found early, the survival rate is excellent — 92% — but because the symptoms are so vague, easily mistaken for other common women’s issues like PMS or pregnancy, they are often overlooked. This allows the cancer to grow, and when caught later, at Stage III or higher, the prognosis is significantly poorer.

This is exactly what could have happened to Aleks Patete, if it hadn’t been for her baby boy. Patete was seven weeks pregnant when she went to get a routine ultrasound — one she would not have been able to obtain from Planned Parenthood unless she had wanted an abortion — and a cyst was found on her ovary. Patete was diagnosed with ovarian cancer. “It’s a miracle,” Patete said in an interview with People magazine. “The cancer could have progressed a lot further, and we would have had no idea if it wasn’t for my pregnancy. God sent DJ to save my life.”

But doctors evidently didn’t agree. They told Patete and her husband that her best chance of survival was to have an abortion, and then undergo an aggressive regimen of chemotherapy. But Patete refused, and wouldn’t even consider it. “He saved my life,” she said. “Now it was my turn to save his life.”

Fortunately, there were chemotherapy options that were relatively safe for Patete’s baby, but she was still worried. “As a mom, you don’t want to do anything that could harm your baby,” she explained. “I was terrified, but they explained that it was a relatively safe option.” So she had chemo for five months, getting six rounds every four weeks, all while growing her preborn child and working full-time as a registered nurse. “It was the hardest decision I’ve ever had to make,” she said. “But we had to weigh our options — if I didn’t do anything, I put my life at risk, if I did something, was I putting the baby at risk? It was extremely difficult.” And as time went on, her baby remained healthy.

“It was rough trying to grow a human and go through chemo,” she said. “I was so tired and sick that I had to schedule my days off for when I knew I would be feeling ill.”

DJ was born on April 24th, three weeks after she completed her last chemo treatment. “It was just beautiful,” she recalled. “And he’s the sweetest baby, always smiling and just a joy.” DJ is healthy, and so is Patete, now in remission. Not long after she gave birth, doctors removed her right ovary and fallopian tube to prevent more cancerous growth, but kept the left ovary and fallopian tube so she can have more children in the future. “I could have had a hysterectomy, but because I plan on having more kids, the doctors wanted to just take the ovary out,” she explained. And she gives thanks to God for her miraculous survival, which doctors said needed an abortion. “I think about the things that could have happened and what could have gone wrong and there’s no other reason than the grace of God that everything worked out and we are both alive,” she said. “I truly think God was watching over us.”