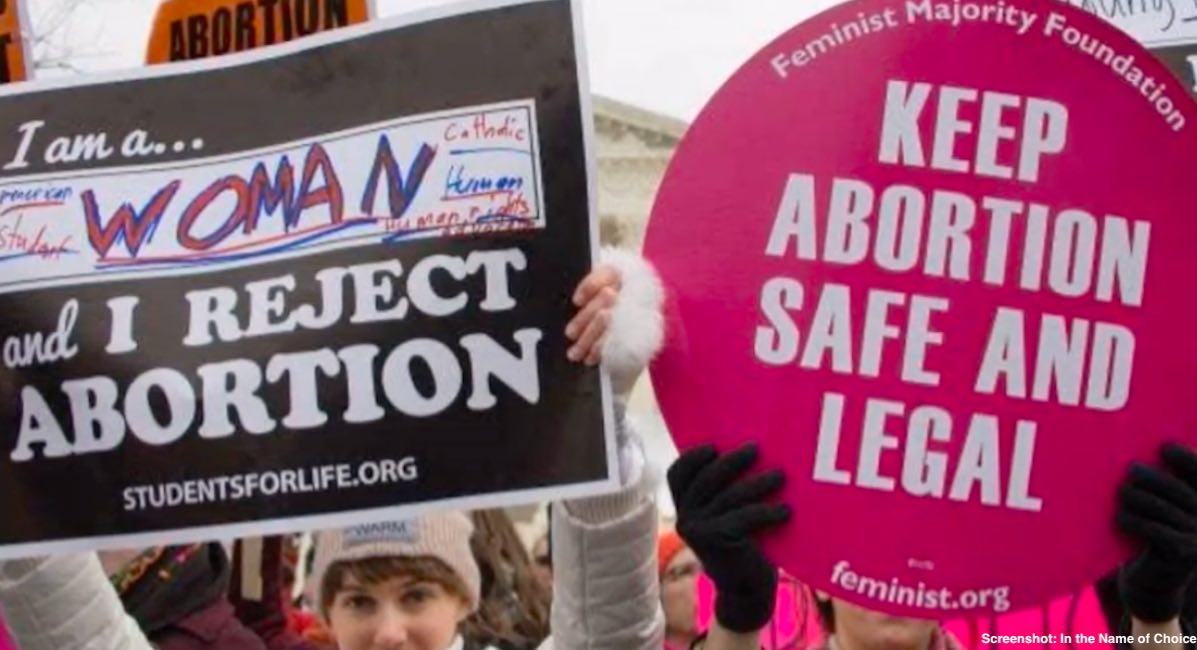 Abortion supporters used to hide behind the mantra that abortion should be safe, legal, and rare. Today, many are showing their true colors by calling this cleverly marketed phrase “ancient” and “outdated,” and one that must relegated to the “dustbin” of history. In its place, advocates want abortion to be anything but “rare,” demanding that abortion be available anytime, anywhere, for any reason — and subsidized by the American taxpayer. But it is likely that this was always the agenda.

In 1992, President Bill Clinton claimed he wanted abortion to be “safe, legal, and rare,” but according to a 2019 Washington Post op-ed penned by Alexandra DeSanctis, “by 2012 the Democratic Party excised the word ‘rare’ from its official platform, writing instead that it favored ‘safe and legal abortion, regardless of ability to pay.’”

“You don’t have to go back to the 1990s to find Democrats speaking in a more moderate vein. As recently as her 2008 presidential primary run against Barack Obama, Hillary Clinton routinely used the phrase ‘safe, legal and rare,’ even adding, ‘and by rare, I mean rare.’ But by her 2016 campaign, she’d dropped such talk,” wrote DeSanctis. “In 2009, Obama delivered a commencement address at the University of Notre Dame in which he acknowledged the moral complexity of abortion, spoke of pro-life Americans as operating in good faith and called for reducing the demand for abortion. That kind of language is nowhere to be heard in the current Democratic primary race, even from former vice president Joe Biden, who supported the Hyde Amendment for decades — until his current run.”

Even pro-abortion NPR has acknowledged the messaging shift, writing this just days ago:

The 1990s-era Democratic slogan ‘safe, legal and rare’ is now deeply controversial, and many abortion-rights activists consider it inherently stigmatizing.

In fact, when people like former Planned Parenthood President Leana Wen and 2020 Democratic presidential candidate Tulsi Gabbard said they wanted abortion to be ‘safe, legal and rare,’ they were met with backlash.

In other words, belief in ‘safe, legal and rare’ has not entirely disappeared; rather, the group of people who believe that it is an either ineffective or outright-harmful strategy has grown — and grown louder.

Case in point: in April, Renee Bracey Sherman, a former NARAL board member and founder of the abortion site We Testify, lectured politicians to drop the ‘safe, legal, rare’ mantra altogether. In an opinion piece published by Rewire News Group entitled, “Dear Politicians, Put ‘Safe, Legal, and Rare’ in the Dustbin,” Bracey Sherman criticized Hillary Clinton, Rep. Tulsi Gabbard, and other politicians for using the phrase, insisting that “[d]emanding abortion be ‘rare’ is stigmatizing at its core.”

“‘Safe, legal, and rare’ is nothing but a mediocre talking point masquerading as a policy compromise, evidenced by the current status of decimated abortion access.,” wrote Bracey Sherman. “Abortion will always be necessary, no matter what your campaign strategist tells you.”

Bracey Sherman then claimed that “[t]he myth of ‘rare’ was created by politicians uncomfortable with abortion and sex….”

“Before you start abortionsplaining to me about what these politicians actually meant and why we should be working to make abortions ‘rare,’ let me explain why you’re wrong,” she wrote. “The very idea of abortion being ‘rare’ isn’t real. It’s not actually a number, it’s an idea—and it’s not even factual.”

Bracey Sherman doubled down in a recent tweet, writing, “I love how the anti-abortion movement uses old clips of ‘safe, legal, and rare’ as some gotcha moment. I’ll be clearer: F**K SAFE, LEGAL, AND RARE. We deserve abortion at any time and for any reason. Period.” 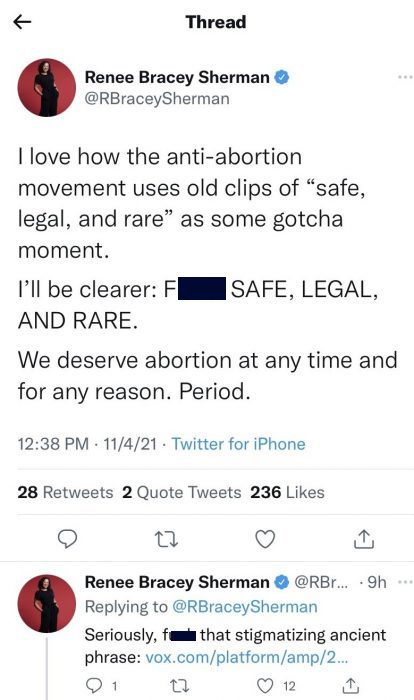 Former abortion clinic ‘counselor’ and We Testify storyteller Kenya Martin, (nicknamed the Abortion Diva) encouraged people to be unapologetic about their abortions at this year’s Women’s March rally in D.C. Martin works for the National Network of Abortion Funds and is a board member for the Abortion Care Network.

Texas abortionist Ghazaleh Moayedi — who once bragged on Twitter, “Some days I leave clinic and think, ‘damn, I really WAS put on this earth to be the best damn #abortion provider this side of the Mississippi’. Not a humble brag, that’s a full on brag brag. I’m that good” — publicly claimed in a House hearing, “Abortion is a blessing, abortion is an act of love, abortion is freedom.”

In today's Judiciary hearing on the Texas Abortion ban:

Days ago, Sonja Spoo, Director of Reproductive Rights at UltraViolet called abortion “essential,” “necessary,” and “freedom” on the steps of the Supreme Court.

This followed an art exhibit in New York that portrayed abortion as “normal,” as well as multiple rallies calling abortion “healthcare” and “essential.”

Others have started referring to abortion as “normal,” “love,” and “healthcare.” 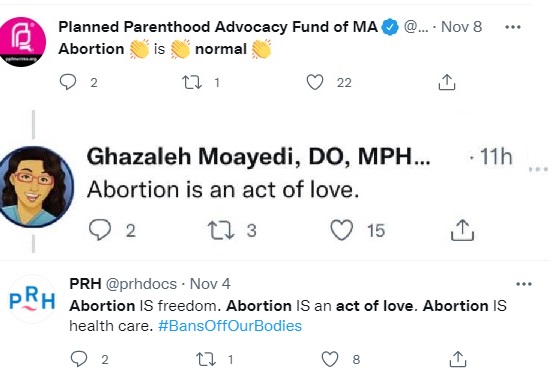 In fact, the Preterm abortion facility in Cleveland, Ohio, responsible for the abortion related death of young Black women, is clear that they do not subscribe to the abortion should be rare philosophy.

This for-profit abortion facility has implemented a My Abortion, My Life billboard project which attempts to normalize abortion. 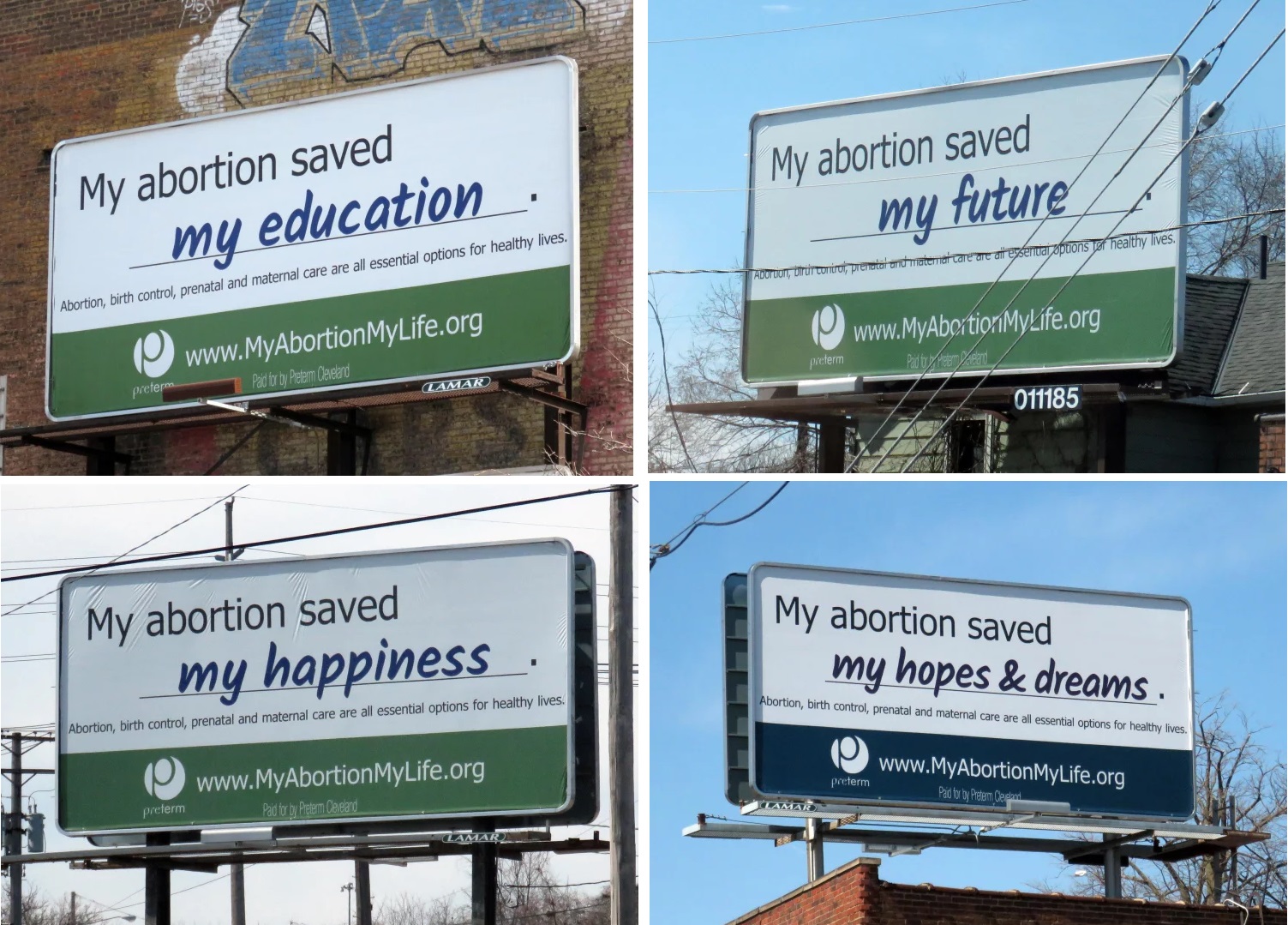 Abortion advocates are growing more brazen as the legal challenge to Roe approaches the Supreme Court, yet polls indicate that the American public remains uncomfortable with unrestricted abortion on demand funded with taxpayer dollars. This only adds to the sentiment that abortion — the dismemberment, suction, and poisoning of approximately 2,363 human beings daily in the U.S. before they take their first breaths — should not be “rare” but abolished entirely.