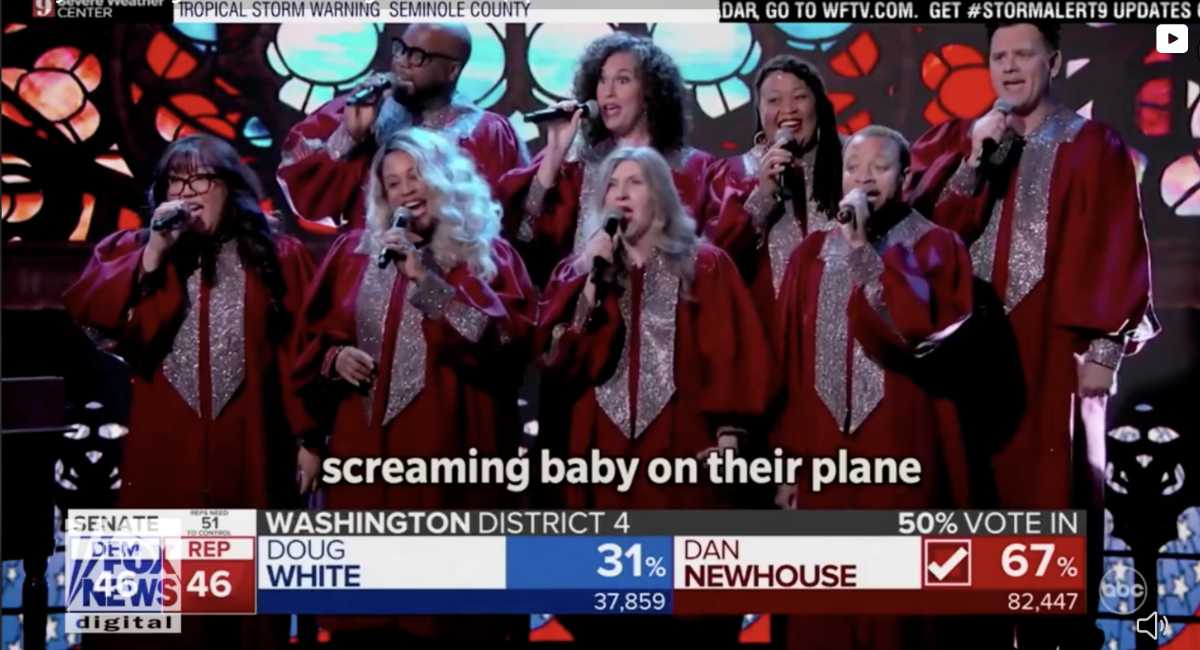 Jimmy Kimmel, host of ABC’s Jimmy Kimmel Live, dedicated his Tuesday show to election night and spent some time promoting abortion by using a gospel-like choir with a stained glass church window in the background.

“Reproductive rights are under attack,” Kimmel said. “Thirteen states have banned abortion with a dozen more on the horizon.”

The choir then launched into a song that blamed the Supreme Court for unplanned pregnancies and implied that if a human being is unwanted she should be killed. The choir also alluded to dead babies being better than screaming babies.

“More unwanted children, the Supreme Court is to blame,” they sang. “We hope they always have a screaming baby on their plane.”

But this hysteria missed the fact that in overturning Roe v. Wade, the Supreme Court did not state that people must have sex, or even conceive children. Ninety-seven percent of women who become pregnant exercised their free choice to engage in sexual intercourse. This act puts a fertile biological female in the position of possibly becoming pregnant. An abortion does not prevent a pregnancy, or merely end a pregnancy; it ends the life of an innocent human being in existence through no act of his or her own.

Dressing a group of singers dubbed “The Silver Lining Singers” as if they were a church choir appears to have been an effort to mock Christians, many of whom oppose the act of aborting a human being. It also could serve as a nod to Vice President Kamala Harris’s recent attempts to convince Christians to support abortion, repeatedly telling them, “One does not have to abandon their faith or their beliefs to agree” with legalized abortion on demand.

On the eve of Election Day, the episode of Jimmy Kimmel Live included Kimmel’s wife Molly McNearny, who said, “Abortion rights are gone or in danger in 26 states.” She asked viewers, “Every time you have sex, is your intention to have a baby? Being a mom is the best and the hardest job on the planet. I can’t imagine forcing any woman who doesn’t want that job to take it against her will.”

But unless the only time a woman has sexual intercourse is during the fertile time of her cycle (near ovulation), she isn’t risking pregnancy “every time [she has] sex.”

Not a single pro-life law forces anyone to have sex and conceive a child. And if a woman does become pregnant, no law forces her to act as the child’s mother following the child’s birth. If, once the child is born, she still does not want to mother her baby, the option of adoption exists.

McNearny also shared the lie that “a good portion of the women who need [an abortion] after the first trimester do it because of health complications that could kill her or her baby,” adding that “Roughly half the women who have abortions live below the poverty line.”

However, patient director of the “all trimester” abortion facility DuPont Clinic Karishma Oza has admitted, “[T]here is also a myth that abortion in the second and third trimester is only for people experiencing anomalies. That’s also not true… [T]here’s a misconception that there also has to be something wrong with the pregnancy in order to have an abortion, and that’s just not true.” DuPont commits elective abortions up to 32 weeks and six days — nearly 12 weeks after a baby is first considered capable of surviving outside of the womb.

In addition, McNearny’s discriminatory remark that women who live below the poverty line need abortion plays into the role of legalized abortion as a eugenic tool to reduce certain populations — namely the poor. Poverty and abortion are actually part of a cycle, according to a report by the USCCB, with research showing that wide access to contraception and abortion has increased out-of-wedlock births, with disadvantaged women then being targeted for abortion.