A report recently published by the Washington Free Beacon indicates that the political arm of a Wisconsin Planned Parenthood has been issued a civil penalty by the Federal Election Commission (FEC) for failing to report in a timely and accurate fashion expenditures spent in support of Democratic candidates. The report states that Planned Parenthood Advocates of Wisconsin failed to file “independent expenditures spent in support of Democratic candidates Hillary Clinton and Russ Feingold during the 2016 elections, according to a settlement released by the commission.”

FEC documents state that in March of 2018, by a vote of four to zero, a negotiated settlement was approved by the FEC with Planned Parenthood Advocates of Wisconsin Political Fund (referred to as respondent), after “[t]he Reports Analysis Division referred Respondent for failing to file 48-Hour Reports totaling $116,898.08 to support two independent expenditures disclosed on the 2016 October Quarterly Report.” 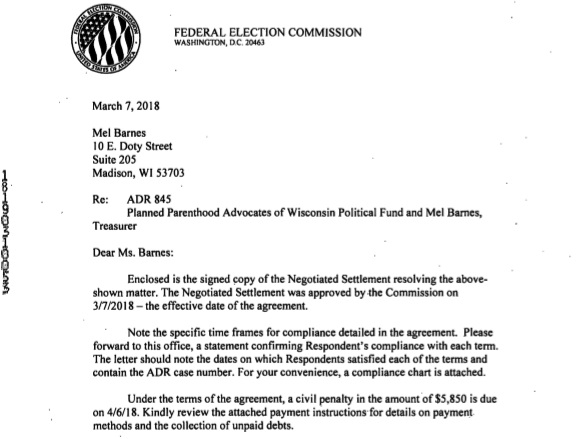 A report by Fox News details the violations further:

Planned Parenthood Advocates of Wisconsin’s failures to disclose its expenditures were discovered after discrepancies were found in the group’s October 2016 quarterly report. The group had marked $133,305.04 worth of independent expenditures on that report, which covered its finances from July 1 to September 30, 2016. However, $116,898.08 of the $133,305.04 worth of expenditures the group showed in the filing was never submitted in any previous 48-hour reports, a requirement for money put towards independent expenditures.

The independent expenditures consisted of $58,449.04 Planned Parenthood Wisconsin in support of Hillary Clinton and an additional $58,449.04 disbursed on the same day in support of former Sen. Feingold (D.), who failed to recapture the Senate seat from Sen. Ron Johnson (R.).

Under the terms of the agreement (ADR 845), a civil penalty in the amount of $5,850 was issued. In addition, the Committee agreed to certify that a representative of the organization participated in an FEC conference, webinar, or other program developed in consultation with the FEC’s Information Division.