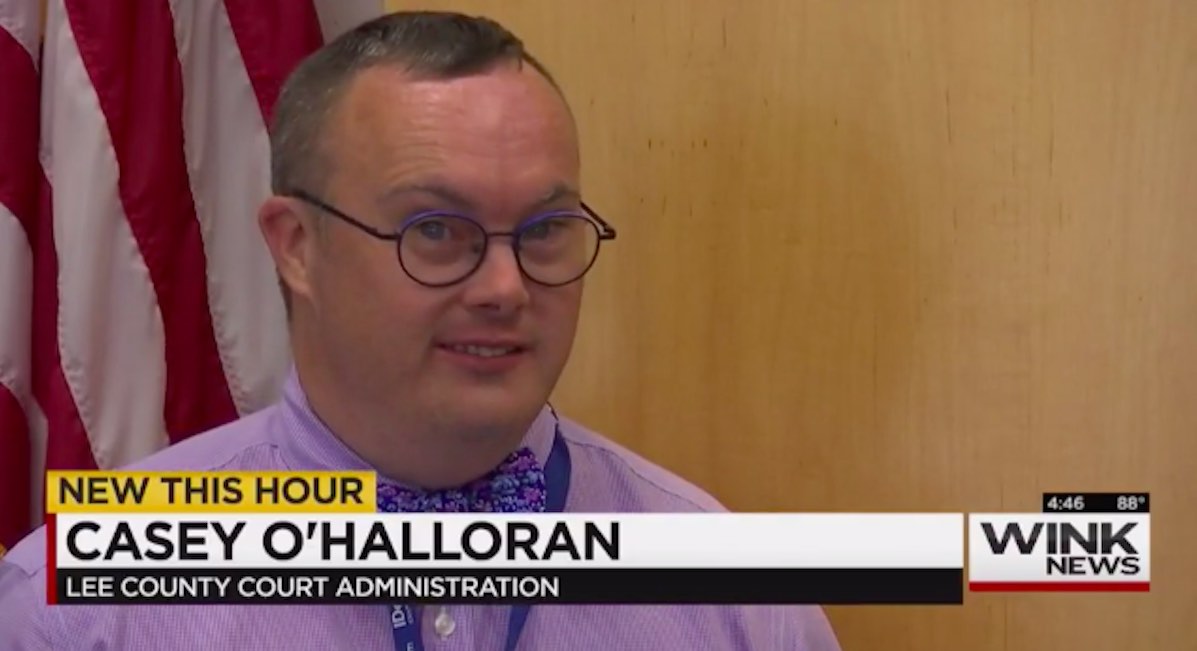 Casey O’Halloran has Down syndrome — but that didn’t stop him from following in his family’s footsteps. O’Halloran works for the Lee County Courthouse in southwest Florida, in keeping with his family’s tradition of working in the justice system. But along the way, he’s become an inspiration to the people he works with.

O’Halloran has worked for the Lee County Courthouse for 18 years. “What I do is I deliver files to the judges, and the judges make the decisions,” he told WINK. And he’s been successful in his job, with his duties expanding and growing over the years. “We’ve expanded duties since when he first started,” Sheila Jerome, the civil family division director said to WINK. “He does get to visit a lot of different people and experience a lot of different things, so he’s pretty well known around the courthouse.”

He now works in numerous departments, but he says he doesn’t have one he likes the best. “To be honest with you, my favorite department is everything really,” he said. O’Halloran also said his father, a career lawyer, is the one who taught him to pursue his goals. “It’s in my blood really because instead of being an attorney, I get to work for the court,” he explained. “I’ve got four attorneys in my family.”

READ: Down syndrome didn’t stop Matthew from starting his own barbecue business

O’Halloran also hopes his career can send a message to other employers: that it’s worth it to hire people like him, who have disabilities. “People with disabilities can have a job,” he said. “I believe that they can be independent.” And ultimately, he doesn’t want to be defined by his disability. “I don’t think of myself as man with Down syndrome,” O’Halloran said. “I’m just a man with a tie on who walks and takes his wife on date nights.”

People with disabilities are often underemployed, with as much as 70 percent of people with disabilities left unemployed. Those who do find jobs are often paid less than minimum wage. But people like O’Halloran are sending a strong message: just because people with intellectual disabilities have trouble speaking, it doesn’t mean they don’t understand, or that it doesn’t matter if it takes a little longer to learn — they get there with time. People with Down syndrome are capable of leading fulfilling, independent lives. What stands in the way isn’t their disability; it’s the ableism of society.