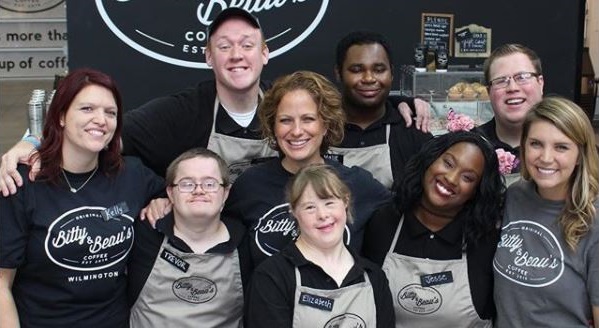 When Amy Wright’s two youngest children — Beau, 13, and Bitty, 8 — who both have Down syndrome were born, she became an advocate, like many parents of special-needs children. But when Wright and her husband Ben realized that 70% of people with disabilities are unemployed, they decided to take action.

After her husband opened an investment firm and hired nine associates with intellectual and developmental disabilities, the couple knew they wanted to do more.

“These associates weren’t getting a lot of face-to-face time with clients, and the whole idea here was to bring people together,” said Wright. “And that planted the idea for the coffee shop.”

“There was no criteria for the hiring process. It was, ‘Do you want a job? Will you be dedicated to your job? Do you have a good attitude?’ And once we brought them in, we found out what they were comfortable doing, or what they were good at,” Wright said.

For this work, Wright was named CNN’s Hero of the Year for 2017. For Wright, her advocacy all started with her children.

“When you become a parent of a child with special needs, you are instantly thrust into becoming an advocate,” she said. “Trying to make people see the beauty in their lives that we see. I realized [the coffee shop] would be the perfect environment for bringing people together. Seeing the staff taking orders, serving coffee — they’d realize how capable they are.

And while Bitty and Beau’s is a coffee shop, it’s so much more than just that.

“Bitty & Beau’s Coffee is a new lens, one that changes the way people see other people,” she explained. “It’s about human value. It’s about acceptance. It’s about inclusion. It’s about much more than a cup of coffee.”

The reality is that it’s extraordinarily difficult for a person with an intellectual or developmental disability to get a job, or be paid a fair wage. But Wright pays all of her employees over minimum wage, and they also can earn tips and get raises.

“Most of them have never had jobs before, yet they are extremely qualified and capable of doing them,” she said. “They are so grateful for the job, and they approach the workday with a lot of gratitude, and it’s infectious. When you have a serving staff that is positive and grateful, the customers pick up on that and they leave with a good attitude. It is a very happy, positive place.

Can you hear the cheers coming from @bittyandbeauscoffee ?

“We try to set an example here that their work is just as worthy as typically-developed people. And they have dreams they want to work toward. One helped his family put down a payment on a house. Another is saving up for a car.”

As part of her award, Wright will be given $100,000, which will go towards expanding her business. But she hopes it will go much further than just Bitty and Beau’s.

“I hope that people see what’s happened here and go back to their businesses and say ‘how can we incorporate someone with a disability where I work. And so that will be what really changes the statistic,” she said.

When she accepted her award, Wright cried tears of joy and surprise and had an emotional message for her employees and her children.

“I am bringing this home to the 40 employees who work at Bitty & Beau’s because they are my heroes. And most of all to my two youngest children, Bitty and Beau, who are my inspirations,” she said. “I want you to know, because I know you are watching, that I would not change you for the world, but I will change the world for you.”