Tina Atkins, the mother of a 23-year-old Keisha Atkins, who died from complications during a late-term abortion, is now seeking a wrongful death investigation. Keisha went to Southwestern Women’s Options — an infamous late-term abortion facility which has already been a subject in a congressional investigation — to obtain an abortion at approximately six months’ gestation.

Keisha Atkins was a healthy young woman with no prior medical history. At 24 weeks gestation, Atkins checked in to Southwestern Women’s Options (SWO) abortion clinic on Tuesday, January 31, 2017, then again, each day through Friday, February 3, 2017, for a multi-day abortion procedure when she was transported to University of New Mexico (UNM) Hospital for emergency care, where she died. Atkins died during the highly dangerous late-term procedure that is known to carry high risk. Despite these factors, the Office of the Medical Investigator, located at the UNM School of Medicine, found Atkins’ “manner of death is natural.” 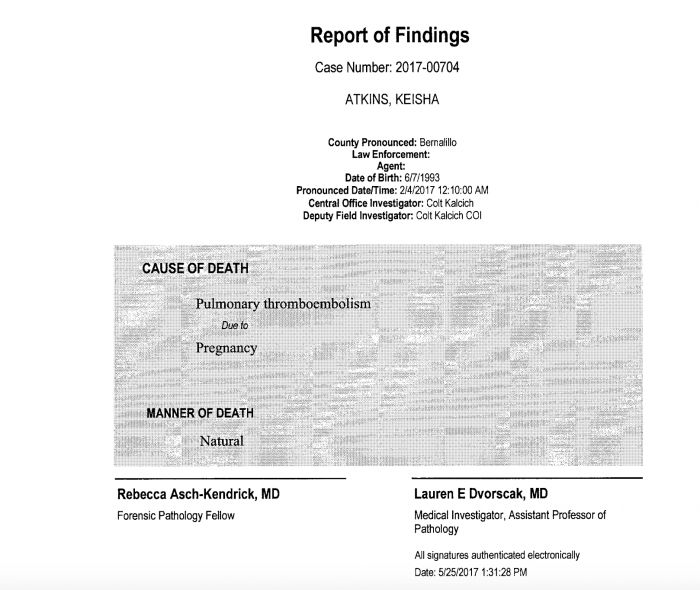 Did conflict of interest play a role in Keisha’s death?

But the spokesperson for Atkins’ family, NMAFL director Elisa Martinez, sees nothing “natural” about the events—especially in light of the history of the abortion facility. Martinez is serving as spokesperson so that Tina Atkins and her family can have privacy as they deal with the situation. Martinez said:

It is well established that UNM Hospital and Medical School have a deeply-aligned collaboration with Southwestern Women’s Options abortion center, whether it’s conferring faculty appointments for Southwestern abortion doctors or the free supply of aborted baby body parts for UNM’s experimentation. We want to ensure no conflict of interest played a role in the handling of Keisha’s situation, however serious questions remain surrounding Keisha’s cause of death.

UNM and its partnership with SWO have been the subject of many headlines. SWO is the facility run by late-term abortionist, Curtis Boyd. Boyd and his partnership with the university’s OB-GYN program were part of the investigation by the congressional Select Investigative Panel on Infant Lives. SWO provided the university with fetal tissue. In fact, the university abruptly halted its training program with SWO after an investigation by NMAFL. Yet even after halting the program, the university health center told the Albuquerque Journal it had “no plan to stop accepting fetal tissue from Boyd’s clinic – despite an internal policy that appears to call the practice into question.” The Journal added:

The policy does not prohibit the practice, they say, but conceded that its wording could be misunderstood by a “lay” person.

Boyd isn’t compensated for the tissue samples, which are provided after a patient at his clinic consents, they added.

Live Action News reported on Atkins’ death last year, noting that an autopsy by the UNM Office of the Medical Investigator “determined that Atkins’ cause of death was ‘pulmonary thromboembolism due to pregnancy,’ in other words, blood clots in the lungs,” adding that “[Operation Rescue] believes this is a ‘whitewash’ meant to blame Atkins’ pregnancy for her death, instead of laying the blame on a mismanaged abortion procedure.”

Did Keisha really die from pregnancy… or from the brutal, four-day abortion process?

These reasons are part of why Atkins’ mother is determined to get to the bottom of the cause of losing her daughter during a late-term abortion — and her grandchild. According to NMAFL, Atkins said, “All I want is justice for my baby and my grandbaby and every other woman who has put her life and health at risk to endure this brutal procedure,” adding, “My grandbaby would have been a year and 3 months now, but instead I have to deal with the constant pain of two deaths, my daughter and grandbaby, as well as the injustice.”

At 24 weeks of pregnancy, and with a four-day process, it sounds as if Keisha endured a late-term abortion by induction, a procedure explained below by former abortionist Dr. Anthony Levatino:

Atkins’ attorney, Seibel, told Live Action News, “The circumstances underlying Keisha Atkins medical treatment clearly warrant a complete and thorough investigation of the true cause of her death. If any wrongdoing is found, Tina Atkins is committed to pursuing all legal avenues to ensure justice on behalf of her daughter,” adding that Atkins’ “commitment and courage” to search for the truth should be applauded by the public, as the abortion industry has a great deal of secrecy.

And Martinez says that secrecy needs to be exposed, as it relates to the young woman’s death, adding:

[F]or justice to be served, the Atkins family expects complete transparency as to what transpired, including how the cause of death was determined and to what degree the conflict of interest between UNM and Southwestern Women’s Options abortion business come into play. No family should have to go through what the Atkins family has suffered.

To that degree, NMAFL says, “Seibel has subpoenaed internal notes, memorandum, photographic evidence and all documents relating to Atkins’ autopsy performed by the Office of the Medical Investigator at the UNM School of Medicine. Additionally, Seibel has requested a complete history of all medical records for Keisha Atkins from both SWO and UNM Hospital.” Seidel added that he is looking forward to working with the New Mexico Medical Board, as well, and indicated he would file a formal complaint on behalf of the victim. Seibel did not mention the name of the abortionist. Boyd’s facility has at least four abortionists, according to Operation Rescue’s database of abortionists and their facilities. They include Carmen Landau, Curtis Wayne Boyd, Emily Rothman, and Shelley Sella.

Sella and Landau can be heard in Live Action’s InHuman investigation on late-term abortion below:

The ongoing problems at abortion facilities continue to remind women that these facilities are far from the safe and caring environment they are promoted to be. Pro-lifers often remind people that two people go into the abortion facility, but only one comes out. In Keisha Atkins’ case, two went in and none came out. Now Tina Atkins and her family are demanding to know why.