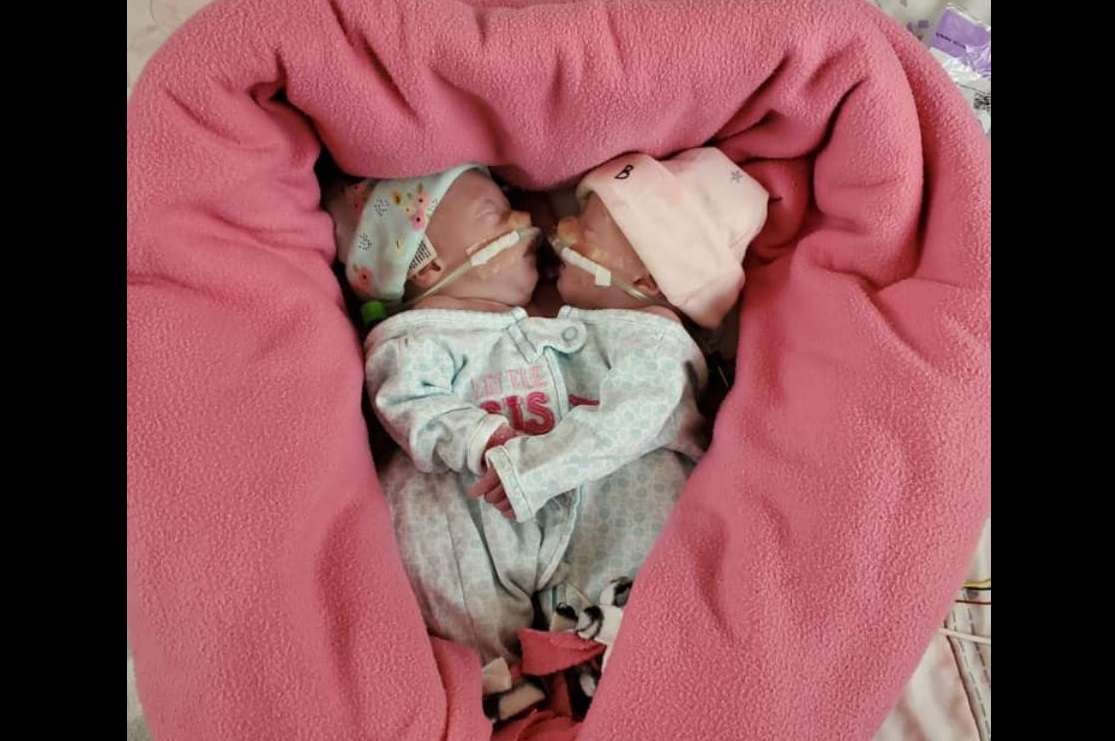 UPDATE, 9/14/21: The Hickey twins have gone home! According to the family’s Facebook page, both girls have gained over a pound since birth, and weigh over three pounds each. Doctors had concerns over the girls being able to regulate their body temperatures, as with most premature infants, but have been doing well.

A reply to a comment did say it was not possible for the girls to be separated at this time, but they are growing and remaining strong.

UPDATE, 9/1/21: Conjoined twins Lakelyn and Laylie were born on Wednesday at 32 weeks and remarkably survived the birth. The girls are two pounds, 13.9 ounces each, and are 14 inches long. Their Facebook page, Hickey Conjoined Twins, announced the arrival and said both girls are breathing on their own and are doing well so far.

8/31/21: A Kentucky couple expecting conjoined twins is determined to give their children a chance at life despite the fact that doctors have said there is a slim chance that the babies will survive after birth.

In an interview, Charla Cook told WLKY that she was more than halfway through her pregnancy when she and husband Logan discovered they were having twins at a routine ultrasound appointment. Doctors quickly determined that the babies were conjoined, and that they share several organs, including the liver. Because of this, many medical professionals believe that is nearly impossible to separate the babies once they are born.

Charla said that because the doctors felt the twins had such a slim chance of survival, they offered abortion as an alternative. A GoFundMe for the family said that they were given little hope or help upon learning the diagnosis.

“The best thing the hospital could offer was the option to terminate within 4 days. Not giving them enough time to ethically process what they had just found out or not giving them time to find surgeons that could help their twin girls,” the page says. Despite the negativity from medical professionals, Charla and Logan refused abortion and are instead hoping for the best. “I honestly pray for God just to perform some type of miracle,” said Charla.

The parents have also been very proactive in seeking alternative medical care in the hopes of finding doctors willing to try and separate the little girls once they are born. Their searching has paid off, as there is a medical team in Florida who has agreed to take on the case. “That’s the only hospital that has told us that. So after we heard that news, we had hope for something after hearing so many negative things from so many places and professionals,” Charla said.

Because it will not be easy for Charla and Logan, already parents to three other young children, the family has set up a GoFundMe to help with expenses. A recent update to the page states:

We have recently found out that the twins must be delivered earlier than originally expected. We will welcome Lakelyn & Laylie to the world on Wednesday September 1st! Charla will be 32 weeks exactly the day the girls are delivered. Please pray for a safe delivery and for God to guide the surgeons hands during the surgery. Pray the twins are stable after birth and that the family can have as much time with the girls as possible. We know God is capable of miracles!…

As she continues her pregnancy, Charla holds on to hope. “The girls have survived so far, so I know they’re fighters,” she said.