If you’ve ever wondered if you can make a difference in the pro-life movement, this is for you! 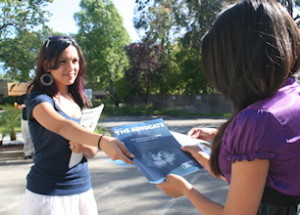 Working with the student and community distributors for The Advocate, Live Action‘s student publication, I have the privilege of seeing all sorts of stories come through my inbox.

Stefanie Lewallen, a dedicated Advocate distributor, wrote me recently to share one of her experiences passing out The Advocate while doing sidewalk counseling.

The excerpt below is a powerful example of how powerful handing someone a copy of The Advocate can be. One person + one Advocate = lives changed.

Despite the fact that some people walk right past you… some people stop to talk to you and they really listen. I mean REALLY LISTEN.

In talking with some girls they have hugged my neck and said, “You are the first person who has given me hope.” Other times girls have never heard that there are places of ministry that offer free ultrasounds and pregnancy tests and …real help for the life of their baby.

There are girls whose boyfriends are forcing them to have an abortion and they need your strength to walk away. There are girls whose moms have brought them to get rid of their “mistake” … There are those who quietly take your resources and slip inside to resurface later and thank-you for being outside for them to show them the development of their baby and what an abortion really looks like. Sometimes a worker or volunteer who may just be doing paperwork and has never been in the room when the abortion is performed will proclaim, “Is this for real? I didn’t know this is what it looks like! This is awful!”

Many counselors who had exchanged numbers with a scared girl have often had the joy of getting a call from the hospital. They always go something like, “You many not remember me, but I just had my baby.” Of course, we always remember them and drive ourselves straight to the hospital to see that little bundle of joy, or “joys” as one counselor on my team got that exact call in regard to twins being born!

Along with the usual sidewalk counseling brochures and local numbers to call for help, I like to hand the young women and men a magazine called The Advocate published by Live Action, a youth led media and investigative group who expose the evil of the abortion industry.

I remember handing the magazine to a young male who told me that is was too late because his girlfriend was already inside. … I asked him to read the magazine anyway… I watched him flip through the pages in his car from the sidewalk. I watched him hold his head in his hands, and he let out a gut-wrenching sigh. … He held his head in his hand and kept saying, “This is me. I am that boyfriend who takes my girlfriend for more than one abortion.” He got out his cellphone and tried to call her and then sobbed that it was really too late. BUT…he said he would NOT be bringing her back. He also said IF ONLY YOU WERE HERE AN HOUR EARLIER! That statement really got me, because I am only one person, and as many people we have on our team it is often hard to cover and catch all the abortion hours at each mill.

What an impact it makes when we show up! … If only someone else was there an hour earlier that could have reached out to this young man and his girlfriend. The baby’s development was a surprise to him, as were the pictures of what an actual abortion looks like. Something they definitely do not show the girls inside.

That is why the sidewalk is so important, and that is why counselors keep endlessly going back…It is time for people to rise up out of their comfort zones and begin conversations with people you don’t know. 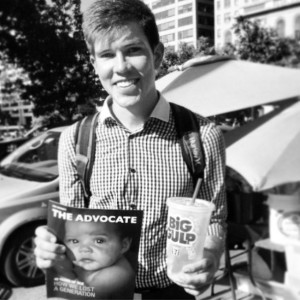 Stories like this, coming across my desk every day, let me know that the work we do is changing hearts and saving lives. The National 40 Days for Life prayer vigil is starting this week, and people are turning out across the country to pray for the mothers considering abortion. But the sidewalk is there year-round, and the men and women heading towards abortion clinics aren’t the only ones who need to know the truth about abortion. Our neighborhoods, our classrooms, even our churches are filled with people who just don’t know what is so very wrong with abortion.

Spreading the truth about abortion is not a job just for the “professionals” – it’s a task for everyone. Not sure how to start the conversation? That’s why Live Action publishes The Advocate: to give you a tool to educate yourself, and to start conversations in your communities.

One person + one Advocate = lives changed. The young man in the story found the truth too late to save his child. Don’t let your hesitancy to speak the truth be the reasons someone else finds out too late how terrible abortion really is. Empower yourself, use The Advocate to start conversations, and start changing the world, one person at a time.

(You can read the full story at Stefanie’s blog, The Write Talk.)