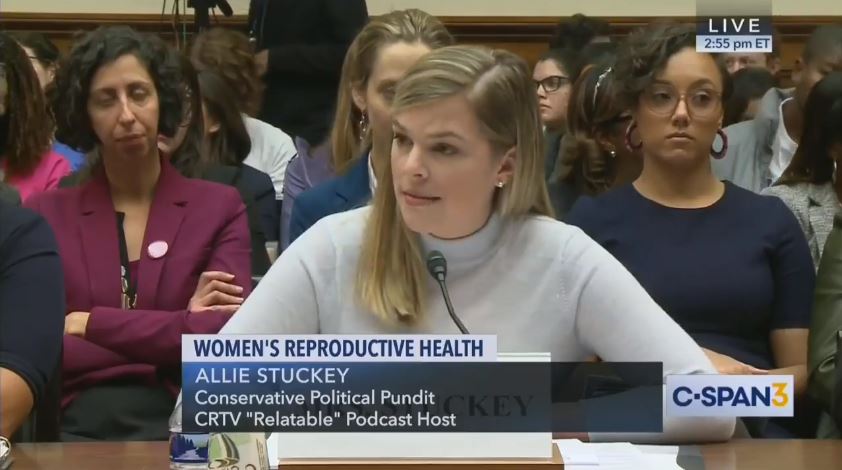 The hearing was clearly meant to forward pro-abortion talking points; as the purpose stated, it “will examine how states, emboldened by the Trump Administration’s sustained and systemic attacks on reproductive health care, are restricting access…” Most of the witnesses were pro-abortion advocates, including a Planned Parenthood executive. But one voice was there to speak on behalf of life.

Stuckey, a conservative commentator, wife, and mother, gave powerful testimony on why life should be protected.

Stuckey explained that she had been observing the growing radicalism of the pro-abortion movement, as well as the injustice visited upon preborn children. “I am here as a mom fighting for a future for her kids, in which rights are not dependent upon whether a person is wanted, but upon their humanity,” she said. “I am here as a woman who believes that female empowerment, equality, and freedom are not determined by her ability to terminate her child. I’m here as an American, afraid for the fate of a country who no longer considers the right to life a prerequisite to liberty, or the pursuit of happiness. I’m here as a human being, horrified by the violence, the oppression, and the marginalization of a defenseless people group, based solely on where they reside.”

She continued by laying out a number of facts that are rather inconvenient for the abortion industry, pointing out how abortion laws are as permissive as they are in only seven other countries, including China and North Korea. She also pointed out scientific facts that make clear the humanity of the preborn, as well as how medical advances have made it possible for premature infants to survive as young as 21 weeks.

Afterward, it didn’t take long for pro-abortion Democrats like Debbie Wasserman Schultz to begin attacking Stuckey, declaring before everyone at the hearing that Stuckey has no scientific or medical background. Though Wasserman Schultz did her best to keep Stuckey from responding, she still was allowed to answer, retorting, “It says something when I, the one without the scientific or medical background, am the only one to give specifics on what an abortion procedure actually is.”

DWS raises question about @conservmillen testifying at abortion hearing without a science/medical background.

Stuckey: "It says something when I, the one without the scientific or medical background, am the only one to give specifics on what an abortion procedure actually is." pic.twitter.com/h72XPInkKE

The reality of what abortion is, and what it does, is not pleasant. It’s only possible for it to remain legal by ignoring that reality, and by denying that preborn children are human beings. Stuckey’s testimony struck at the heart of so many pro-abortion arguments, which is why it has resonated with so many — and likewise, caused so much angst among the abortion activists in attendance.