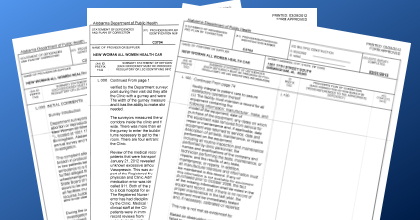 Supporters of what should be a soon-to-be-shuttered abortion clinic in Alabama are pulling out all the stops (and not just the legal ones) to keep the place open.

In early April, the Life Legal Defense Foundation announced what it called the “final chapter” for an abortion facility in Alabama. According to LLDF, the Alabama Department of Public Health revoked the license of the New Woman All Women (NWAW) clinic. According to paperwork from the State of Alabama, inspectors visited the clinic after complaints that the “[c]linic had a breach in protocol on January 21, 2012, resulting in two patients being transferred out via ambulance to a local hospital.” The clinic was to be closed due to its failure to operate “safely.”

However, according to an April 25 press release on Christian Newswire, though the NWAW abortion clinic is set to close on May 18, 2012, supporters are reportedly working the system to keep the clinic open. Public records viewed by the LLDF show that an applicant for a new license to take over the clinic has already filed paperwork. According to public records, the new applicant has ties to the current clinic owner, Diane Derzis. An applicant for a new license cannot be connected to the clinic – the Consent Order notes that “the applying entity or individual must be independent from and no affiliated with New Woman or its officers or directors[.]”

LLDF Attorney Allison Aranda sent a letter to the Alabama Department of Public Health on April 24. You can read the full letter here. Aranda’s letter was written to make sure the Consent Order in the case is strictly followed.

Dana Cody, executive director of the Life Legal Defense Foundation, noted, “How can a clinic’s license be revoked by Consent Order of the Alabama Department of Public Health (ADPH) and be allowed to remain open? Despite 76 pages of code violations that endanger the safety and health of women entering the New Woman All Women (NWAW) abortion clinic, the ADPH Consent Order revoking their license does just that. If this was a restaurant with as many violations, it would have been shut down immediately.”

The LLDF cites a few items as evidence that the applicant for a new license is connected to the soon-to-be former owner, all found in the public record. First, an address listed on the application by the new applicant, Marianne Kelley Rain-water, is a home owned by Diane Derzis, the current director. Second, Ms. Rain-water applied for the new license for the New Woman All Women clinic before a public announcement was made about the clinic’s closure. You can read more about LLDF’s investigation here.