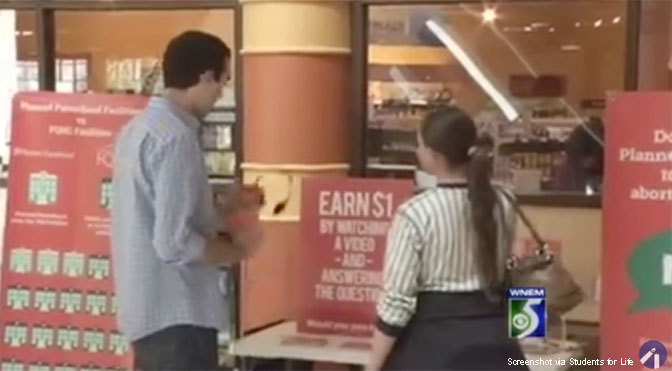 (Students for Life) Our ‘thing’ over here at Students for Life of America is reaching students with a positive, pro-life message on college and high school campuses. To that end, we have created dynamic and interactive campus displays that are specifically geared towards opening up conversations with students about abortion. And it has been working!

This semester we just wrapped up our brand new “We Don’t Need Planned Parenthood” campus tour, which consisted of huge banners that educated students on the differences between the abortion giant and Federally Qualified Health Centers (FHQCs), which are federally funded and provide many more services than Planned Parenthood, but without abortion.

The display featured glass boxes and wooden coins where, after viewing the display, students could cast their vote for whether or not they think Planned Parenthood should continue to receive over $500 million a year in tax dollars or whether the money would be better spent on FHQCs. Students voted overwhelmingly for the FHQCs.

Students were also able to view a highlight reel of the worst of the worst of the Center for Medical Progress videos that showed Planned Parenthood engaging in the buying and selling of the body parts of aborted babies. SFLA paid students $1 to watch a four-minute compilation of the videos because we know that when students saw the videos, they were more likely to have a negative opinion of Planned Parenthood. For a super cool video of what one pro-life group did on campus, check this out.

Even local media covered many of the stops, which only helped to permeate local communities with our positive pro-life message:

All in all, we took the display to 68 campuses! We reached thousands of students with the message that we truly don’t need Planned Parenthood and there are better options for affordable healthcare.

Editor’s Note: This post was originally published at the Students for Life blog on May 10, 2016, and is reprinted here with permission.