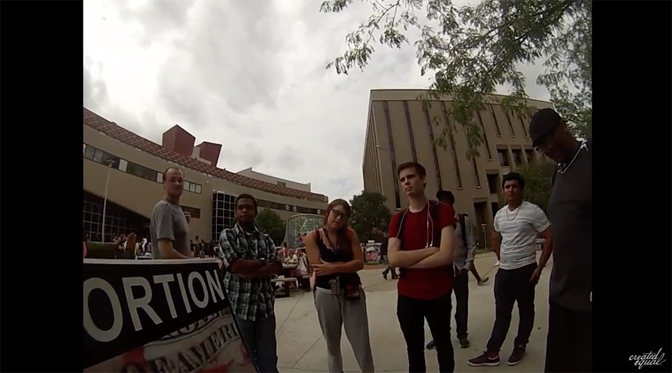 In two videos released by the pro-life group Created Equal yesterday, we see the positive effect of open discussion on college campuses regarding abortion. Some students offered common pro-choice arguments in response to the Created Equal crew, but several students admitted that after viewing the evidence and hearing the science and logic behind the pro-life position, their viewpoint had been changed.

In the first video, we meet Pablo, a formerly pro-choice student who details his journey to becoming pro-life. A student at Ohio State University, Pablo explains that at the time of his first encounter with a pro-life outreach, he was staunchly pro-choice. The encounter motivated him to seek out evidence at the library against pro-life arguments. But rather than becoming solidified in his support of abortion, Pablo experienced something else entirely. While he was not immediately convinced, Pablo describes how his discussion with the pro-lifers caused him to eventually realize the truth.

In the second video, Created Equal members interact with several students on campus, encouraging open-mindedness and discussing some of the more common pro-choice arguments – such as the argument that a mother who is not financially prepared should be free to abort. Several of the students participate actively in the discussion, and following this they acknowledge, “you changed my viewpoint on this,” and “my thinking has definitely changed.”

Created Equal describes itself as “a social action movement seeking to end the greatest human rights injustice of our time.” Their mission statement says, “Killing preborn babies is nothing less than age-based discrimination.  Abortion robs us of our future.  Our goal is to restore the true meaning of equality to include equal protection between the born and the preborn.”