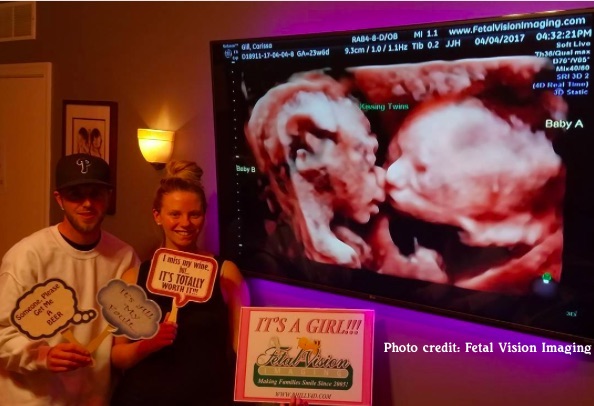 Life and love happen all around us, even inside the womb. A recent ultrasound image being shared across social media is proving that as it depicts identical twin girls snuggling up and even exchanging a kiss.

Mom Carissa Gill, who is 26 weeks pregnant, told Fox 29 that she wanted “to share this story with the world.”

“Pregnancy is a beautiful thing to capture, especially when you get to see moments like this,” she explained.

Congratulations Carissa and Randy with your kissing twins! Thank you for coming to Fetal Vision, we hope you enjoyed your experience with us! #FetalVision #KissingTwins #HDUltrasound www.FetalVisionImaging.com

Gill and her boyfriend, Randy Good, were having a 25-week ultrasound performed when they saw Baby B giving Baby A a kiss on the cheek. Then the twin girls, named Isabelle and Callie, gave each other a kiss. The 3D ultrasound image was shared on Fetal Vision Imaging’s Instagram page.

“It was just so exciting to see them like that,” Gill told InsideEdition.com. “I didn’t think they were going to be that close together, but they are, and it was just so beautiful. […] Seeing them so close like that, it was just amazing.”

Isabella giving her sissy Callie a kiss on the cheek. I am so overwhelmed by the love and support that I have received for these two precious babies and the ultrasound that I shared with all of you. I know some of the comments were rude but a whole lot were so sweet and so nice !! So thank you to everyone who showed some love. On another note, I am 25 weeks and I am just so anxious and excited to meet my two baby girls .

26-week-old preborn children are often killed inside the womb despite their obvious humanity that began at the moment of their conception. The lives of sweet babies like Isabelle and Callie are cut short by third-trimester induction abortion as described by former abortionist Dr. Anthony Levatino in the video below. (Dr. Levatino explains the most common abortion procedures in America in free, online videos here.)

While most abortion advocates will argue that late-term abortions only occur out of medical necessity, this is far from the truth. Elective abortions occur during the last few weeks of a pregnancy — well beyond the age of viability — for financial and socio-economic reasons. They are also performed when the child receives an abnormal prenatal diagnosis, whether the child would be able to survive or not. All that matters to the abortionist is whether the parents determine if that child’s life is worthy or not. As for third-trimester abortions for the health of the mother, an induction abortion takes two to three days, while a C-section takes mere hours — and has the potential of delivering a living baby while still preserving the health and life of the mother. Which one sounds better in an emergency?