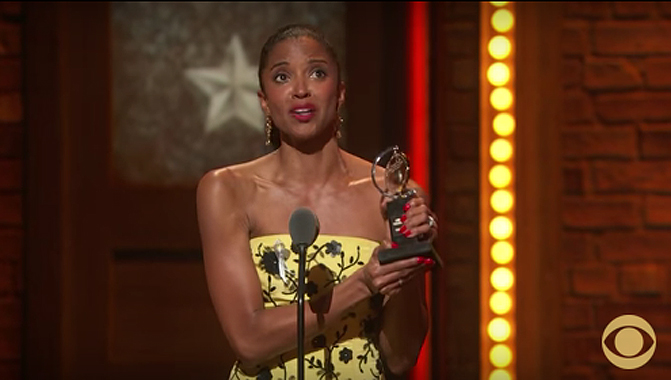 Sunday night, Broadway actress Renee Elise Goldsberry won the Tony Award for her role as Angelica Schuyler in “Hamilton.” For many people, winning the prestigious award would be the highlight of their lives, the greatest accomplishment a person could ever achieve. For Goldsberry, however, that wasn’t the case.

In her emotional acceptance speech, Goldsberry cried, as she thanked her husband and spoke of how she tried for 10 years to have children… and that she was able to be a mother and still with the award.

Goldsberry and her husband have two children: Benjamin and Brielle. Shortly before auditioning for “Hamilton,” the couple had adopted Brielle from Africa and brought her home. Goldsberry wasn’t planning to work for a few months as they adjusted to life with their daughter, but she couldn’t pass up the chance to participate in the musical. It was a decision that clearly worked out for her. And she serves as a living reminder that women can have children, and also have successful careers.

But as Goldsberry pointed out in her acceptance speech, there would be many people who wouldn’t understand why a woman would potentially sacrifice their career potential to have children— and it’s a sentiment that is often echoed by the abortion lobby.

Women are frequently told that they need abortion to be successful. Pro-abortion millennial Carly Manes argued that women could accomplish nothing without abortion. Pro-abortion radical Jessica Valenti has said that women need abortion so they can go to college. Planned Parenthood president and CEO Cecile Richards recently claimed that her abortion chain has, for a hundred years, “allowed women to live out their dreams.”

Those are just a few examples. Abortion advocates routinely choose to demean women and tear them down, rather than empower them and build them up.

When a woman faces adversity, they tell her to kill her baby. If a baby is perceived to be in the way of a woman’s career, then the answer is not to provide her with resources so she doesn’t have to choose, or to advocate for a more mother-friendly work environment; it’s for the mother to kill her baby! Abortion is the solution to every problem, and women are frequently told by pro-abortion activists that they are too weak, too fragile to handle a baby and a career.

It’s condescending, insulting, and harmful to women. Women do not have to choose between killing their babies and having a successful career. Goldsberry is the latest incredible example of that, but she’s far from the only one. Women are strong enough, talented enough, and smart enough to accomplish their goals and achieve their dreams without having to resort to abortion.