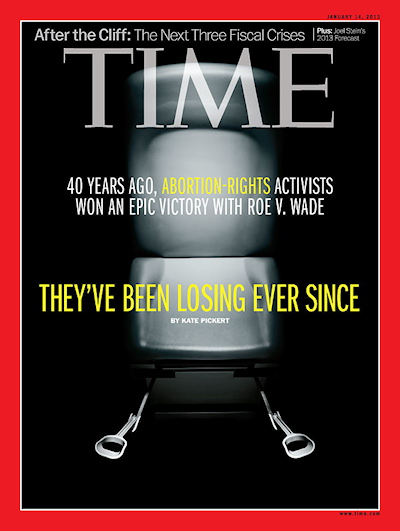 We are winning! And that’s not stopping any time soon.

TIME magazine’s most recent cover got my attention. The Jan. 14, 2013 edition shows a hospital chair with stirrups, along with the capitalized words “40 years ago Abortion rights activists won an epic victory with Roe v Wade – They’ve been losing ever since” inscribed on the front. The title brought to a mind a moment when I felt that God had given me a message about the pro-life movement. The thought “You are on the winning team” came to me after a beautiful pro-life poster was taken off a building in New York. Although the removal of the billboard was discouraging, the thought that somehow we would still win gave me hope.

While I suppose TIME’s title is meant to frustrate young anti-life activists into action, it should encourage pro-lifers to see that our labor is truly not in vain. We are making a tangible difference, even if we can’t always see it.

TIME’s cover article, “What Choice?,” written by Katie Pickert, highlights some valuable areas where pro-lifers are gaining ground. Reading it is almost like getting a progress report from a teacher. It helped me to recognize where this movement is bringing forth positive change and heading toward victory. Here are a few of the key areas Pickert touches on:

Pickert writes, “In 2011, 92 abortion-regulating provisions – a record number – passed in 24 states after Republicans gained new and larger majorities in 2010 in many legislatures across the country. These laws make it harder every year to exercise a right heralded as a crowning achievement of the 20th century women’s movement.”

Later, Pickert quotes Joshua Wilson, an assistant professor of political science at John Jay College and the author of The Street Politics of Abortion. Wilson said concerning pro-life activists, “If they can get laws on the books, great, because they have the legal resources to defend them when they’re challenged. It’s an integrated strategy that’s very impressive.”

The closing of an abortion clinic or an abortion doctor having a change of heart is an answer to prayer for faithful pro-lifers. Katie Pickert acknowledges that along with the closing of clinics, the number of abortion providers is decreasing.

“In addition to North Dakota, three other states – South Dakota, Mississippi and Arkansas – have just one surgical-abortion clinic in operation. The number of abortion providers nationwide shrank from 2,908 in 1982 to 1,793 in 2008, the latest year for which data is available. Getting an abortion in America is, in some places, harder today than at any point since it became a constitutionally protected right 40 years ago this month.”

Pickert says, “At the state level, abortion-rights activists are unequivocally losing. Part of the reason is that the public is siding more and more with their opponents. Even though three-quarters of Americans believe abortion should be legal under some or all circumstances, just 41% identified themselves as pro-choice in a Gallup survey conducted in May 2012.”

Pickert believes that a shifting in public opinion is connected to technology being easily accessible. She says, “In this age of prenatal ultrasounds and sophisticated neonatology, a sizable majority of Americans supports abortion restrictions like waiting periods and parental-consent laws.

The anti-abortion cause has been aided by scientific advances that have complicated American attitudes about abortion. The prenatal ultrasound, which has allowed the general public to see fetuses inside the womb and understand that they have a human shape beginning around eight weeks into pregnancy, became widespread in the 1980s, and some babies born as early as 24 weeks can now survive.

Arts and entertainment have also played a part in bringing a positive change in public opinion regarding abortion. The inspirational pro-life film October Baby is sold at Walmart, the movie Bella was a success, and even secular films like, Juno and Knocked Up display women choosing birth over abortion.

I believe that the most important and unaccounted for reason the pro-life movement is winning is because of prayer. Movements like “40 Days for Life” have gathered thousands of people across the country to pray outside abortion clinics. “Bound4Life” is a pro-life ministry that has encouraged hundreds of thousands to wear red life bracelets and pray daily for the ending of abortion. These prayers are making more of a difference than we’ll ever know.

While I’m encouraged by the progress we are making as a movement, I know there is much more work to be done. I’m thankful for leaders who are not afraid to raise their voices to end abortion. TIME‘s recent issue also includes an article titled ” Viewpoint: Pro-Life and Feminism Aren’t Mututally Exclusive” by Emily Buchanan, executive director of the pro-life “Susan B. Anthony List.”

The past few years have seen the emergence of young leaders like Kristan Hawkins of Students for Life of America, who is responsible for organizing more than 675 pro-life groups on college campuses across the nation, and Lila Rose of Live Action, whose undercover video work has forced the abortion industry to confront and amend practices it cannot defend, as well as dozens of other future leaders who have assisted our organization as staff members and interns.

Leaders like Hawkins, Rose, and Buchanan are taking the pro-life movement in the right direction. As Emily says, “[o]ur fight transcends elections and legislative battles because our fight is in our hearts. This is why, 40 years after Roe, our movement is still growing. We won’t give up; we can’t give up. Our fight is for life.

We will win this battle!