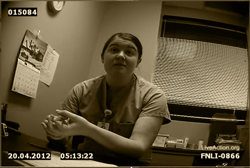 “They do not resuscitate.”

Today Live Action released the third video in its Inhuman undercover video investigation. The latest installment in the investigative series only further establishes the fact that Kermit Gosnell, with his “House of Horrors,” is not alone. With footage taken at the Family Planning Associates Medical Group in Phoenix, Arizona, the brutality, inhumanity, and lawlessness of the late-term abortion industry is clearly documented.

When asked by the undercover investigator what would happen if the baby were to survive the abortion, Linda, an abortion center counselor, admits they would not help the baby. From the press release:

Linda: Uh-uh… No…They do not resuscitate.

Later in the video, Doctor Mercer tells the undercover Live Action investigator who is 24 weeks pregnant:

Watch the shocking video below. For more information, visit www.liveaction.org/inhuman.