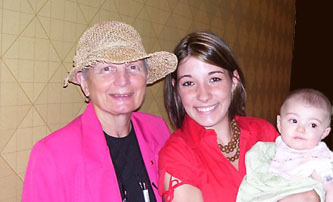 Pro-life heroes come in all shapes and sizes.

A light drizzle falls from the gray sky as Vicki Klein walks along the crooked sidewalk, bundled up in her raincoat and scarf to stay warm on the chilling January afternoon. She reaches the end of the sidewalk and turns around, retracing her steps once again for what might be the hundredth time today. The sidewalk has uncut grass on one side and a parking lot on the other, filled with seven cars. 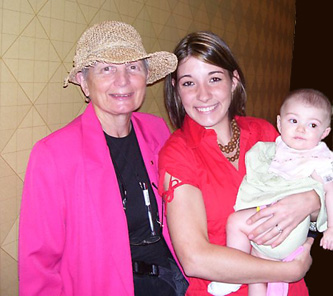 Vicki Klein, Missionary for Life, with Joy and newborn baby, saved from abortion. Photo courtesy of Mission of Life in Mobile, Ala.

The Planned Parenthood building in Mobile, Ala., is a small brick building with a heavy orange door. There is no way to see inside, for the blinds are drawn, and all who enter go in quickly and discreetly. The Mobile clinic is open Monday through Friday, and Vicki is outside on the Planned Parenthood sidewalk when every patient enters and exits. “Rarely do girls come out of there happy,” Vicky explains, shaking her head sadly. “The majority of them come out of the clinic crying and upset. They even have a hard time walking.”

As one woman walks out of the clinic towards her car, Vicki tries to speak to her, saying, “May I give you some information for help after an abortion? It’s just a little pamphlet. I’m praying for you, and I love you. You’re such a beautiful woman.” The woman looks at Vicki and lowers her sad eyes. The car door slams. Vicki walks back to the middle of the sidewalk, her bright green eyes filled with sadness. “I’m not trying to make it harder for her,” she says. “I just want to help her.”

Some patients stop to talk to Vicki and take the free pamphlets she hands out. Others drive away quickly and wave her off, but Vicki never fails to persistently run down the sidewalk and communicate a loving message after the screeching car.

“Sometimes they’re very nice and they’ll talk to you. Other times they won’t give you the time of day. Sometimes they’ll even give us the double-finger,” she laughs. “But I try not to let it discourage me. Not after all this time.”

All of Vicki’s time praying outside of the clinic has given her the opportunity to meet some of the women and children who claim that she saved them. “I recently met a young woman who saved her baby after talking with me, and now she has three children. She just came by to show me her newborn baby,” Vicki says, her eyes twinkling with joy. “I didn’t get to hold the baby, because she was sleeping and I didn’t want to wake her. She was a precious little angel. Absolutely beautiful.”

In the past eight years of walking outside of the abortion clinic, Vicki has counted approximately 700 women that have told her she helped to save their babies. “I think if you offer the young lady help and show her that she can do it, either raising her child or to place her child up for adoption. First you have to reach them where they are at. If they’re scared and they think they’re alone, you have to help them overcome their fears. That’s what saves children.”

Vicki started praying outside abortion clinics after she went to a Bible study on apathy. By the time the group was finished, she knew that she had to do something, especially after her husband expressed to her his belief that this was the most important issue of our time. The priest she was working with during the Bible study had an office across the street from Planned Parenthood, so she went in and said, “Well, here I am. I’m volunteering.” Ever since that moment, Vicki has come to the sidewalk and prayed outside the abortion clinic.

“If they’re open, I’m out here praying. I really don’t even have a choice anymore. It’s my calling,” she states confidently. Vicki grabs her rosary and continues walking again, running her wrinkled fingers over the worn-down beads. She will be here again tomorrow, next week, and even a year from now if that is what it takes. Vicki will continue to pray outside Planned Parenthood until it is no longer there. But until that day, she will continue to walk the crooked sidewalk with a gentle voice and a genuine smile. Rain or shine.