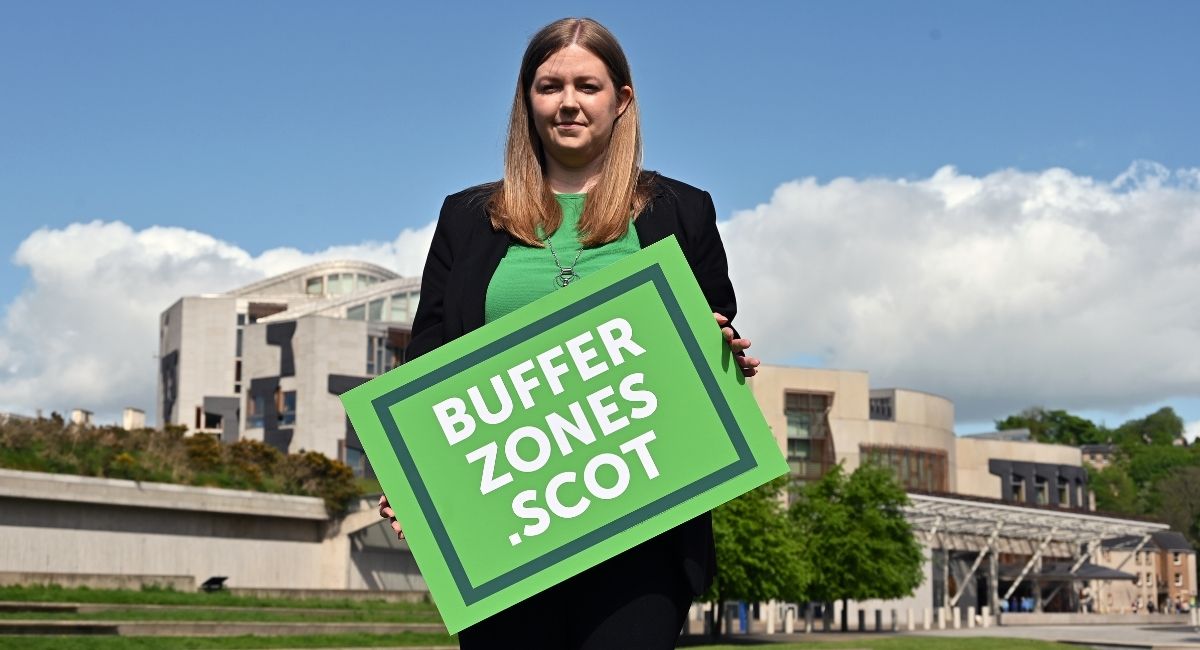 (Right to Life UK) — A Scottish MSP has launched a Bill at Holyrood to introduce censorship zones outside abortion clinics in Scotland.

If the Bill becomes law, potential jail sentences of up to two years would be introduced for people who attempt to influence or persuade someone seeking an abortion inside censorship zones outside abortion clinics and hospitals offering abortion.

Gillian Mackay, an MSP for the Green Party, has initiated a public consultation on the Bill, which is the first stage of the Bill process.

Supporters of the Bill such as Audrey Brown, a consultant in sexual and reproductive healthcare and the chair of the Scottish Abortion Care Providers Group, claim that there has been an escalation in incidents of people standing outside abortion clinics offering alternatives to abortion and praying.

However, Robert Colquhoun, the international campaigns director of 40 Days for Life, one of the groups that organise vigils outside abortion clinics, has said that there has not been any significant increase but that a recent increase in media visibility had drawn the regular vigils to public attention.

Earlier this week, as Nicola Sturgeon made her hostility to these vigils clear and hosted a summit on how to tackle them, the women-led ‘Compassion Scotland’ was launched to oppose censorship zones outside abortion clinics in Scotland.

Their spokesperson, Hannah McNicol said peaceful gatherings happening across Scotland did not amount to harassment and that it would be an “egregious breach of fundamental human rights” to prohibit them.

“Women seek abortions for many reasons and can often be under immense pressure to do so – whether that be financial and employment pressures or coercion from a partner or family member. The peaceful presence of volunteers signposting practical support and counsel has been a lifeline in the past to women who feel they have no choice but an abortion”.

A similar initiative to introduce censorship zones in England and Wales failed to pass in 2020.

Two years previously, following a review into the nature and extent of the activity outside abortion clinics across the country, Sajid Javid announced that the Home Office could not find adequate reason to introduce censorship zones.

He said: “…introducing national buffer zones would not be a proportionate response, considering the experiences of the majority of hospitals and clinics, and considering that the majority of activities are more passive in nature. In making my decision, I am also aware that legislation already exists to restrict protest activities that cause harm to others”.

Opposition to censorship zones extends beyond pro-life advocates to unite a large part of society who may not agree with the pro-life position on abortion but opposes censorship zones as a threat to freedom of speech.

Despite supporting abortion, a number of prominent human rights groups and campaigners have spoken out against the introduction of censorship zones. This includes Peter Tatchell, the Manifesto Club, Big Brother Watch, Index on Censorship and the Freedom Association.

Right To Life UK spokesperson, Catherine Robinson, said: “Through a recent Freedom of Information Request by Compassion Scotland, Police Scotland revealed there were no recorded incidents of intimidation or harassment at thirteen different locations across Scotland between 1 January 2016 and 31 December 2021”.

“The evidence to justify censorship zones simply does not exist. It would be a serious infringement on the right to peaceful assembly and would prevent offers of assistance to at least some women who feel they have no other choice”.