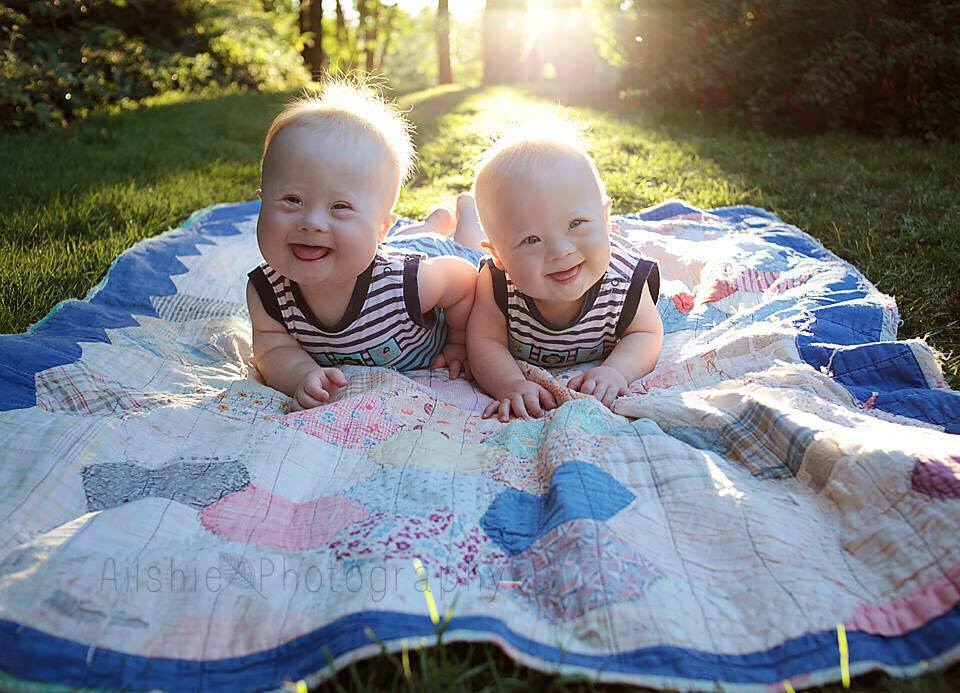 Julie McConnel was a mother to three children from a previous relationship when she married her husband Dan. Together, they had a baby boy and decided to try for a girl. At age 45, McConnel knew she was at risk of becoming pregnant with multiples and having a child with Down syndrome. However, she was shocked to learn that not only was she pregnant with twin boys, but they both had Down syndrome.

“As women get older, our eggs start firing off willy-nilly, so we weren’t too surprised to learn that we were having twins,” McConnel told Caters News.

Having twins was one thing, but learning that the boys had Down syndrome was overwhelming for McConnel and her husband.

“The procedure [amniocentesis to diagnosis Down syndrome] was nerve-wracking and the ultrasound already showed several problems, including spots on their hearts and extra fluid build-up, so we weren’t that surprised when we received the news two weeks later that both of the boys had Down syndrome,” she explained. “Still, it was a terrible day and the months afterward were the most stressful and agonizing time in our lives.”

The couple worried that they were too old to give the boys all of the time and care that they were going to need. Knowing they didn’t want to abort their boys, they decided the best thing to do was place them for adoption and they found a couple who wanted to adopt them. However, when the adoptive parents got cold feet and failed to fill out the necessary paperwork, the McConnels decided to learn as much as they could about parenting children with Down syndrome.

They contacted a local Down syndrome group who happened to be holding a picnic with families of children with Down syndrome. It was the perfect opportunity for the couple to see what life is really like raising children with the condition. What they learned convinced them to keep their boys.

“It was hard for me to hear it all when I was pregnant, but I’ve learned exactly what they told me… which is that it’s not scary,” said McConnel. “You love your kids no matter what. When we finally decided that we weren’t going to let our fear stand in our way, it was easy to make our decision.”

When the boys, named Charlie and Milo, were born, the decision to keep them was reaffirmed. They immediately knew that everything was as it should be.

“My heart came out of my chest when I saw them. I was so smitten,” said McConnel. “It’s hard to imagine life without them, but I think I’d miss them every day if we had decided not to keep them.”

McConnel told The Daily Mail that since having Charlie and Milo she has become a more compassionate person. She worries that people may be rude or mean to her boys out of ignorance, especially as they get older. In order to hopefully avoid this, she plans to send the boys to a school where they will be a part of the mainstream community.

“I want people to see that there are people out there who are different, but it doesn’t make them any less valuable,” she said. “They’re just the way they’re supposed to be.”