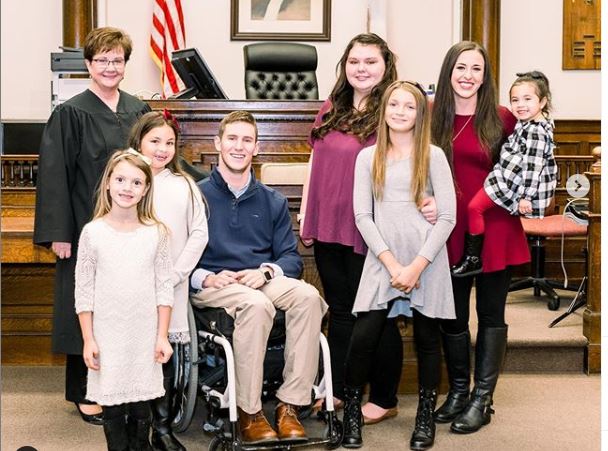 A college football player’s life was changed forever after he took a hit on the field that left him paralyzed. But despite the odds stacked against him, he decided to fight for his goals and found new inspiration along the way to adopt five girls in need of a home.

During a football game at Luther College in 2010, Chris Norton’s neck was broken. He was paralyzed from the neck down and doctors gave him just a three percent chance of ever walking again, according to the Des Moines Register. Norton was a stronger fighter than his doctors realized. After four months of therapy, he regained movement in his hands and eventually his upper body had mobility as well.

Family forever. For always & no matter what. @emilysummersnorton and I love and are so proud of our girls. They are chosen and loved. ❤️ Thank you Des Moines Register & Daniel Finney for sharing our story. Article in bio 📸 Moments & Milestones Photography

As he continued to work hard on recovering, Norton met Emily Summers at a party. They shared a calling to help children. Since middle school, Emily had been mentoring Whittley, a girl in need, starting when Whittley was in second grade.

“I wanted to be a dad and have a wife,” explained Norton. “But I didn’t want to burden somebody with everything I needed. I was waiting for that girl who made me feel alive and someone I wanted to spend the rest of my life with. And then here comes Emily. I knew she was the one.”

With Summers by his side, Norton set his sights on walking across the stage at his graduation. It was a lofty goal, but Summers pushed him to go for it. They became engaged the night before the graduation, and with Summers’ help, Norton walked the stage to accept his diploma. A video of him doing so went viral with over three million views.

It wasn’t long before the couple began fostering children, including Whittley. Though they saw about 17 foster children come and go, they eventually received a call about four sisters, who had been separated into different homes. Ava, Liliana, Isabella, and Ariana needed a place to feel safe and loved, and be together.

“It’s very rare that a foster family will take four all at once,” Summers told the Des Moines Register. “From the start, we knew we had to keep them together.” She explained that 35 percent of children in foster care are separated from their siblings, and said that keeping the girls together “is one of the greatest joys” of her life.

With five foster children in tow, the couple still had a wedding to plan, and Norton’s next goal was to walk with his bride down the aisle at their wedding. And it’s a goal he met in another inspiring viral video in which he walked the seven yards to the top of the aisle.

“It is about not letting your challenges and setbacks keep you down,” he said. “It’s about how we are all stronger with love, and it is about trusting … even when you feel hopeless.”

Shortly after their wedding, the couple adopted Whittley at the age of 19 years old, giving her the home she had always wanted. She said her adoption meant that “I actually belonged to somebody and that I’m not just some stranger in the world.” Two months later, they were able to adopt the four sisters as well.

The new family is excited to be starting a new chapter in their lives together. It’s a chapter that includes a book called The Seven Longest Yards, the Chris Norton Foundation – a nonprofit organization that helps people living with spinal cord and neuromuscular disabilities, and motivational speaking engagements for Chris Norton. The couple hopes to inspire others to open their hearts to fostering and adoption. Together, they are proving that even when life doesn’t go as you planned, there is always beauty and love to be found.

“Saying goodbye to kids you love like your own is the hardest thing I’ve ever had to do…” said Summers. “But I’m not okay living my life protecting myself from being hurt.”