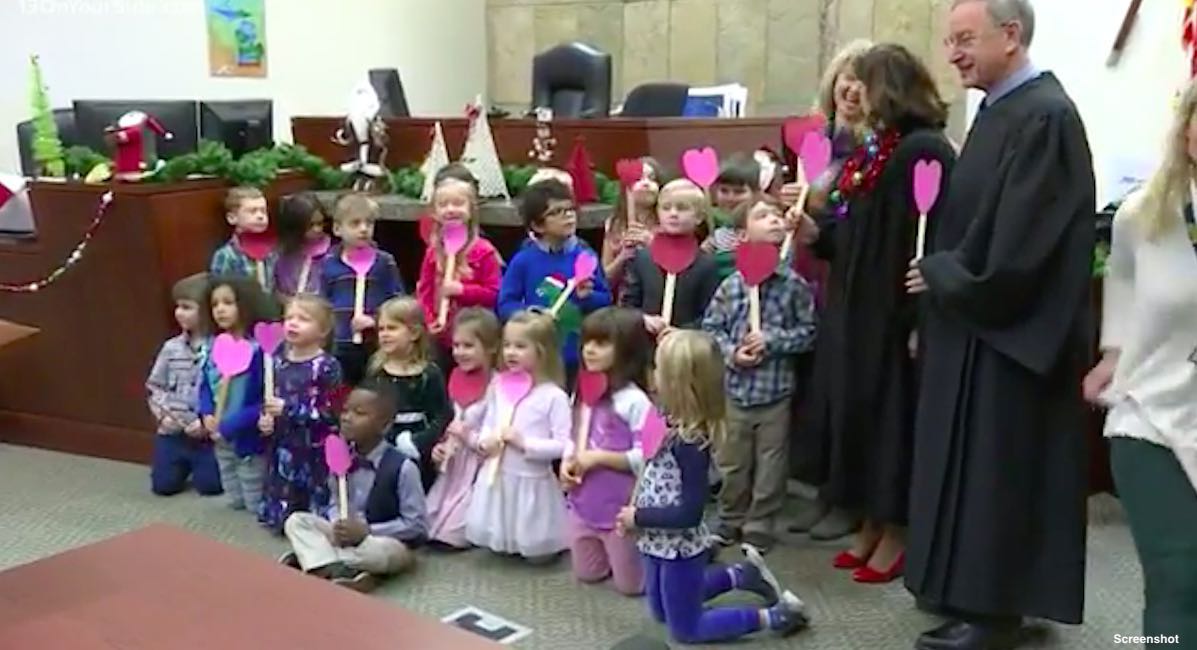 “Family doesn’t have to be DNA, because family is support and love.” Those words from the teacher of young Michael Orlando Clark, Jr. encompassed the attitude of the day in a courtroom in Grand Rapids, Michigan, on Thursday. That’s where Clark, age 5, an adorable kindergarten boy, had a break from his school day reading and writing (and maybe nap time) so he could be formally adopted. And he invited his entire kindergarten class along as witnesses to the happy event.

WOODTV reports that Clark’s new parents, Andrea Melvin and Dave Eaton, started as his foster parents approximately a year ago; now they are his forever mom and dad:

“We were thinking, ‘How can we build our family?’” Melvin said before her new rambunctious kindergarten-age son cut in.

“I love my Mommy!” Michael said.

“And there’s so many options, right, for building a family these days,” Melvin continued.

17th Circuit Court Family Division Judge Patricia Gardner acknowledged the kindergarten guests in her courtroom on the county’s 23rd annual adoption day, which saw 36 adoptions. Each of the 36 was allowed 30 minutes in the courtroom to celebrate, WZZM reported. It’s hard to imagine any celebration was as heart-tugging as seeing a class of kindergarten kids from Wealthy Elementary in East Grand Rapids, complete with hearts on sticks, telling Judge Gardner how they felt about Michael.

“My name is Steven, and Michael is my best friend,” one little boy said.

“My name is Lily, and I love Michael,” another little girl said.

The very special testimony was followed by the judge’s order stating Michael’s adoption was complete. On the count of three, the judge, Michael, and his parents pounded the gavel together and the entire kindergarten class burst into applause, with a collective “YAY!”

The joy of adoption, love, friendship, and family, was all rolled into 30 minutes in a courtroom where the power of love was affirmed — and adoption was normalized to a large group of children, and to their families as well.