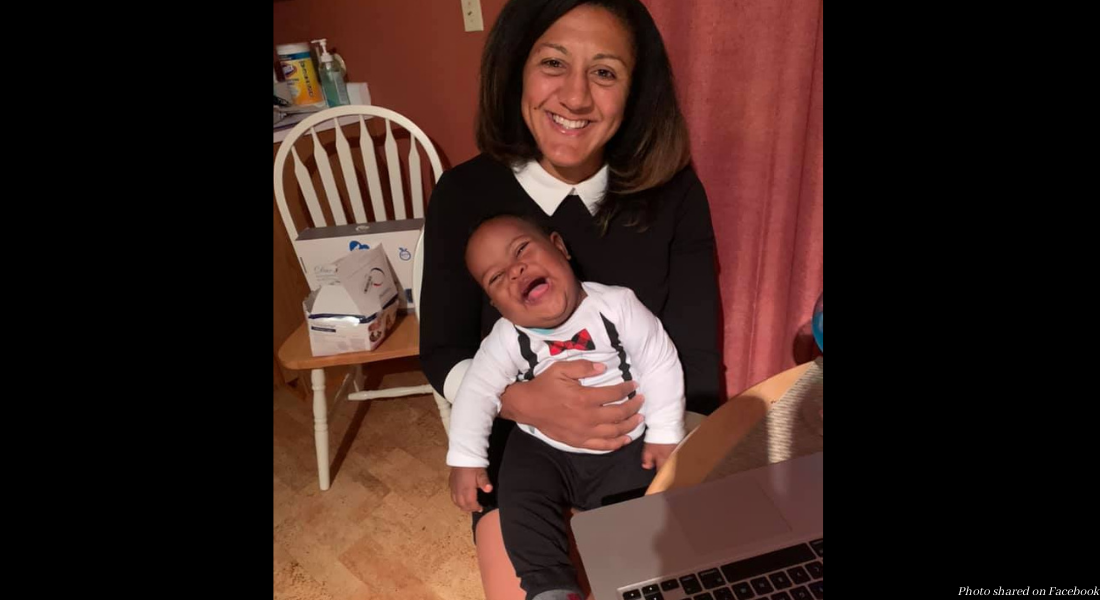 A pair of Olympic bobsledders are adapting to their new life as parents. Nic Taylor and Elana Meyers Taylor are both bobsledders with Team USA, in training for the 2022 Olympic Games in Beijing. Their son, Nico, has Down syndrome — but that isn’t holding back their gold medal dreams for him.

According to the Washington Post, the Taylors decided to start their family between Olympic games. A new U.S. Olympic and Paralympic Committee policy made that possible; before, athletes would lose their monthly stipend and health insurance if they stopped their training schedules for pregnancy and childbirth. It was only this year that athletes would continue to receive their benefits during pregnancy, as well as for a year after childbirth, so long as they committed to returning to their sport.

This policy was crucial for the Taylor family. A Team USA profile explained that Meyers Taylor didn’t think it was possible for her to get pregnant, but miraculously, she did. Then she suffered polyhydramnios (too much amniotic fluid) throughout the pregnancy. Nico also had various issues, including low heart rate. When Nico stopped moving as much as usual, Meyers Taylor was induced, and Nico was born early, having to spend eight days in the NICU. It was then that he was diagnosed with Down syndrome.

“If we didn’t have health insurance, I highly doubt I’d be able to return to bobsled,” she told the Washington Post.

Thankfully, that policy came just in time, and both Elana and Nic are hard at work, hoping to win Olympic gold. Meyers Taylor is already a medalist, previously having won two silver medals and one bronze. She’s also a two-time bobsled world champion. Her hope, though, is to hang her gold medals around Nico’s neck.

In 2014, Team USA’s Noelle Pikus-Pace won a silver medal for the skeleton and hung that medal around the necks of her two children. Pikus-Pace had traveled and trained with her husband and children, and that was inspiring for Meyers Taylor. “I always wanted to be a mother and to bobsled as long as I could,” she said to the Washington Post. “To see her firsthand be able to do it, I was like, ‘Maybe we can make this work.'”

While Meyers Taylor continues to follow her dreams, she wants to help other special needs parents feel inspired, too. “People with Down syndrome can live long, happy successful lives,” she told Team USA. “When people get this diagnosis of Down syndrome, they’re immediately afraid. I’ve even read some people go through a grieving process. I never went through a grieving process with my son. I love him, and I think he’s absolutely perfect.”

And having special needs doesn’t have to hold back anyone’s dreams — not the parent’s or the child’s. “This is a whole new world for us,” she said. “But I’m going to figure out how to do this and still be an elite-level bobsledder. For parents out there who have been given a prenatal diagnosis and are wondering if they can make it work, my goal is to show them that they can, even if they’re traveling around the world.”

READ: Heartbreaking: Parents balk as sibling asks for funeral for aborted sibling with Down syndrome

For now, the Taylors have set up a home gym, and Nico comes with them when they train. They’ve been active with Gigi’s Playhouse, an organization that provides early intervention for babies, tutoring, therapy, and, for older people with Down syndrome, help with resumes and job placement. They also aim to change how the world views people with Down syndrome. Meyers Taylor will be wearing the Gigi’s Playhouse logo on her helmet this winter as she competes.

Soon, the Taylors will embark on the International Bobsled and Skeleton Foundation (IBSF) World Cup tour, with team trials beginning in November at Lake Placid, and they’ve already arranged for Nico to get occupational and physical therapy while they’re there. Speaking to the IBSF of her new life as a mom, she said Nico gives her the drive she needs to keep going, no matter how difficult it may be. “[A]bove anything else, Nico gives me a whole new level of motivation,” she said. “He’s at most of my sessions with my husband, Nic, and when I look over at them I have a renewed sense of energy, regardless of how little I’ve slept.”

And they’re hoping that following their own dreams will encourage Nico to follow his, too. “He’s going to have his dreams and go after them, and I’m going to do whatever I can to support him, whether that’s to be an Olympic bobsledder or not,” she said to Team USA. “Hopefully, he chooses a warm-weather sport… The biggest thing is, I’m not going to put limitations on him. We shouldn’t put limitations on kids with special needs. That’s what I want to show everyone through our journey.”