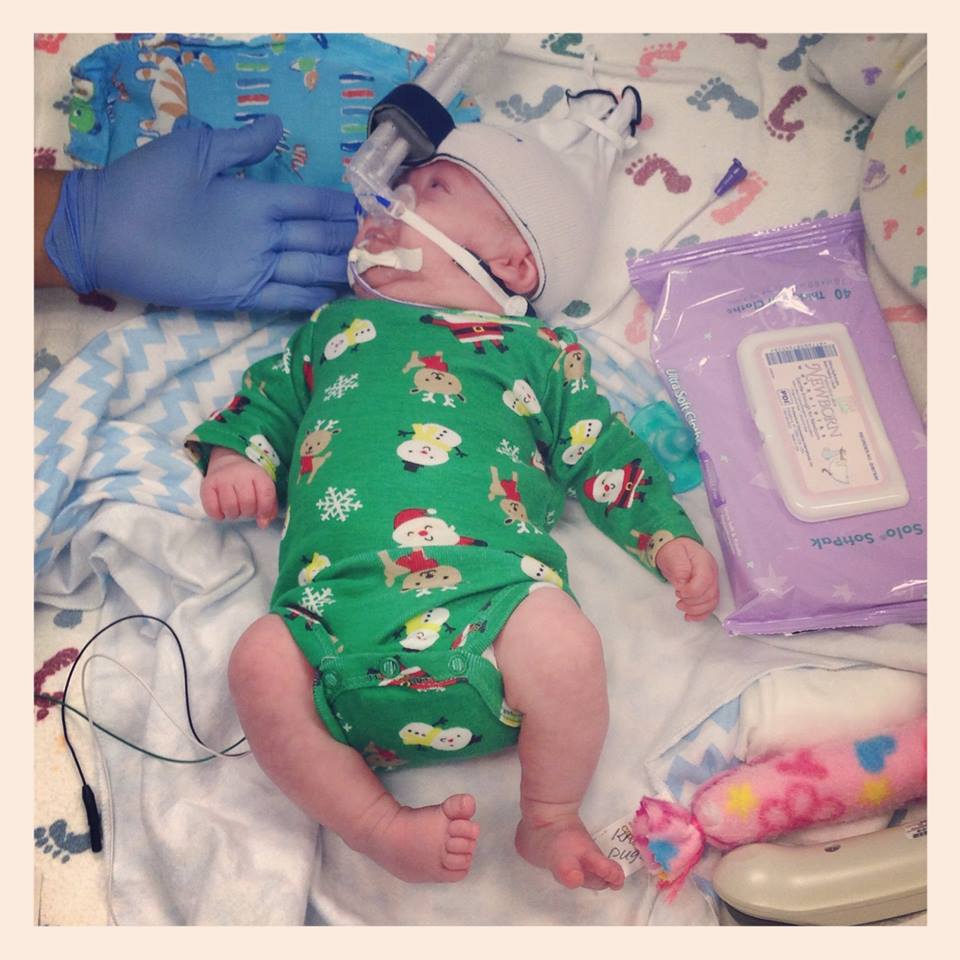 Liam and Knox only got to be brothers together for 24 weeks, but they have left their mark of life and hope in an East Texas community. This Christmas both boys will be celebrated, even as one never got to open his eyes to see the family that loved him and honored his life to the end.

It was on Easter that Jes and Kyle announced to their family and close friends that they were going to have their first child in December. Soon after they found out they were having twin boys. Though they were nervous about instantly becoming a family of four, they rejoiced and started preparing—and naming their boys.

Liam Withers was the name of Baby A, chosen years before for their first boy, and Knox Leldon became Baby B’s name, “Two strong names for our strong boys,” Jes says, remembering their delight at the moment of planning and naming their sons.

But being pregnant with twins comes with risks sometimes:

Jes and Kyle had monthly doctors visits in Frisco [near Dallas], where doctors looked for the signs of Twin-to-Twin Transfusion Syndrome (TTTFS), when the babies are in one placenta and share blood vessels. With TTTFS, “The shared placenta contains abnormal blood vessels, which connect the umbilical cords and circulations of the twins” and “the common placenta may also be shared unequally by the twins, and one twin may have a share too small to provide the necessary nutrients to grow normally or even survive,” according to the TTTS Foundation.

December is International TTTFS Awareness Month. For Jes and Kyle, TTTFS would be the cause of their loss. Jes remembers,

“One late night in July Kyle was on his way home from a Rangers game. I had been told by my doctor to check my blood pressure 3 times a day; It started getting high once I became pregnant. That night it was dangerously high, around 200s/100s. We raced to the ER and they were able to get it lowered. The next day we headed to Frisco with our bags packed. My doctor told me I would be admitted to the hospital for further monitoring.”

She says the hospital visit was the beginning of their roller coaster ride. “We had a sonogram from the maternal fetal medicine specialist. It was determined that I did in fact have TTTS and Liam was showing struggles already. He was 3 weeks in growth behind Knox. I was 20 weeks pregnant at this point. We were told that we needed to go to Denver for a laser procedure to separate the shared blood vessels in the placenta. Before we left I had an amniocentesis reduction. This is when they take amniotic fluid from one baby (Knox) since they have more. It prevents preterm labor and helps stabilize the pregnancy. We were also told that I needed cervical cerclage since my cervix was shortening.”

Indeed, the roller coaster was hurtling off the tracks, and Jes and Kyle did all they could to save their babies. For two long weeks, they made their home in Denver where more tests were performed even to see if they qualified to have the laser procedure. They did and found out that their timing was crucial; the doctors told them had they come later, they would have lost both boys within the week.

“The meeting was overwhelming. I was freaking out. I didn’t want this, I didn’t want any of this. All I wanted was a safe ‘normal’ pregnancy. The doctors told us the procedure would be to save Knox’s life. That Liam had a small chance of survival. That’s all I needed to hear; he had a chance.”

Jes and Kyle’s love for their sons drove all their decisions. The question in their minds was always what they could do to save both of their precious children. There was never a question as to whether they were alive, or whether one should be fought for more than they other. They fought for their babies. Jes recalls,

“After the procedure I stayed over night to make sure we didn’t lose anyone. We were gathered around with our amazing family as the doctor came in to check on our boys. That’s when we heard it, music to our ears, two heart beats. We stayed in Denver for follow up exams and then we were sent home.”

It was August 21 when the situation reached a climactic point. Back in Texas, they returned for a weekly visit to the maternal fetal medicine provider when they heard the heartbreaking words, “I’m sorry baby A has passed. Let me go get the doctor.”

But because Knox was still alive, the next decision became a matter of life and death literally.

“We were given two options at the hospital. Deliver now and hope they can get a breathing tube in Knox, or be given steroids for a couple days to help Knox’s lungs and then deliver. We decided against the second option because Knox was already showing abnormal blood flow in his umbilical cord and we could lose him at any time.”

Jes says it was the hardest decision of their lives, but one they had no question about making:

“We picked option one, deliver,” Jes says, “We knew in our hearts that we would never give up on saving our children. We had come so far we weren’t going to stop. Liam was our first born, sleeping at 7:35 p.m. His little brother Knox at 7:37 p.m. came into this world fighting at 24 weeks and 2 days.”

Although Liam had passed away somewhere between August 17-21, the race was on to save Knox, who was barely at 24 weeks gestation when he entered the world. For months, little Knox has been proving his strong name and fighting like the little man he is. There are concerns he may have some degree of brain damage but the extent won’t be known until he is older. 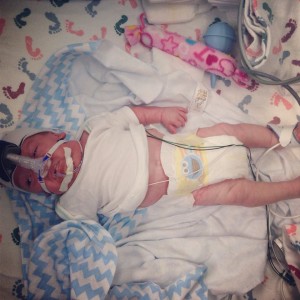 And it won’t ultimately matter to his parents who love their son. Jes and Kyle don’t fight for a perfect son without problems; they fight for their son whatever his problems. They pray for strength for him, for healing, for a full life. They love him unconditionally regardless of his prognosis. Just as they made the decision to fight completely for the lives of both boys, regardless of the doctor’s grim outlook, so now they fight for their son who is contending for life and strength each day.

“As of today Knox is 6 lbs. 15.6 oz. He is stable. His lungs are still fragile and immature, he has chronic lung disease. They need a lot of growing still and the CLD will go away as he gets older. Because of that he is not able to expel C02 fully so to help he is on a breathing machine called NIPV. Still no word on when he can come home. We have to master bottle feeds. He does have other medical concerns especially regarding his brain loss and damage but we will not know the prognosis, if any, until he gets older.”

Little Knox has already fought more battles than most will in their entire lives, but he displays the vale of life of one precious child in a way few often are given an opportunity as well. And Jes knows this. As she updates her social media site, where hundreds cheer on Knox’s growth and pray for him along with the family, she ends almost every post and update on Knox with these words of faith and a declaration of hope for her son:

“I will declare God is my victory and He is here.”

Jes and Kyle aren’t pro-life heroes; they are parents who loved their sons from the moment they found out about their existence. They remind us that the issue of “choice” is a ridiculous one for those who understand the value of life. When we understand the gift in the womb, we never choose to kill our own. What Jes and Kyle have done is act out of love. Knox is their perfect strong son, no matter what issues he may come with in life. And he’s also a pretty normal baby, despite them. Jes says,

“He loves listening to music, Led Zeppelin, the Beatles and the Eagles. He really enjoys his bouncer and watching his fish move on the side of his crib. Snuggle time is his favorite especially right after since he’s rested and wide awake watching mommy and daddy.” A few weeks ago she reported that “Snuggling on his belly with mommy helps his stats get were they need to be. He starts getting relaxed and breathing like he should.” 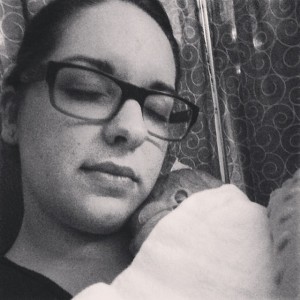 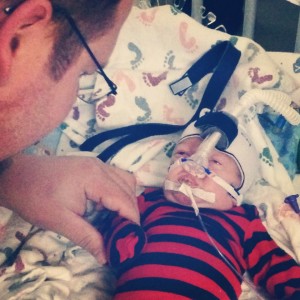 Perhaps no greater testimony of the value of life in the womb exists than when a preemie baby is born at the same stage of development that others might have chosen abortion. Preemies may be one of the clearest pictures of the value of life in the womb we have. In a society where abortion is allowed even in the third trimester, the story of Liam and Knox reminds us that life exists well before we hear the cry come as the baby exits the womb. 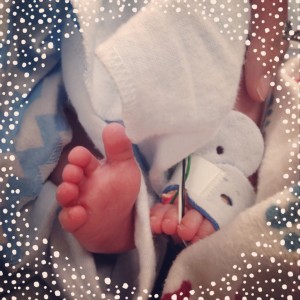 At the end of the day, a life is a life, and Knox is a life that has been loved and valued from the beginning. Without question, he will grow up knowing that he has a brother, Liam, already in Heaven. He will also grow up knowing his parents loved them both completely and made every decision they did to fight equally for their two strong boys.

Jes and Kyle’s battle is not over. They need prayers for their son in this time. Their Christmas miracle is the delight of their lives, even in the sorrow of loss. But they continue to call on God as their hope and victory as they stand for life for their son. 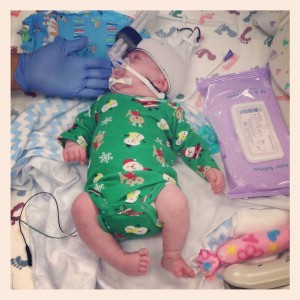