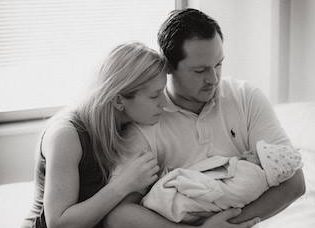 Parents who lost their baby boy at 38 weeks gestation are working to raise money for the Stillbirth And Neonatal Death Charity to help reduce the number of stillbirths, which has remained unimproved for two decades.

Fiona Farmiloe and her husband Oli were parents of two-year-old Sienna in 2014 when they were expecting the birth of their baby boy Sebastian. At 38 weeks, Farmiloe went in with Sienna for a return check up on her pregnancy when she learned the devastating news that her baby boy no longer had a heartbeat.

“I’ll never forget the moment the doctor offered her condolences,” Farmiloe wrote in a blog for the Daily Mail. “‘I’m sorry, your baby has died’, she said. Those words were needles to me.”

After struggling to find a heartbeat, the midwife moved Farmiloe to an ultrasound machine which showed that the baby had died. Struggling to cope with the news, Farmiloe called her husband and hoped that Sienna hadn’t understood what was happening.

After her husband arrived, doctors went over the couple’s options with them and they decided to wait until Farmiloe’s parents could arrive to be with Sienna while they went to deliver their son. It was decided that she would give birth vaginally because it would be better for recovery and future deliveries.

“In his tiny baby blue coffin we tucked a few more toys and some photos of our family,” wrote Farmiloe. “We were given a baby blue teddy that was given to Sebastian, but we decided to give it to Sienna. She calls him ‘Bastian’ and sleeps with him every night. He is her favorite teddy.”

Tests showed that both she and Sebastian were healthy, and had he been born just a few days earlier, he would have lived. Farmiloe learned that stillbirth affects seven in every 1,000 families in the Western world and that this statistic has remained unchanged for 20 years.

“We have discovered that there is simply not enough research or funding that goes into the cause of such an event,” she wrote. “These are our children from the moment of conception – surely it is wrong that this is such an under-researched and under-funded area.”

After learning this, her husband suggested creating Sebastian’s Heroes, which would involve 99 people raising £99 each for the Stillbirth And Neonatal Death Charity. This number was chosen because Sebastian weighed nine pounds and nine ounces at birth. They each had until September 9th (9/9) to raise the funds. Sebastian’s heroes all took different steps to raise the funds. Some biked 100 miles; others held parties and cake sales. One hosted a home restaurant, another a bowling fundraiser. The ideas and generosity were endless. Together they raised over £40,000 for research on how to reduce stillbirths and neonatal deaths.

Sebastian’s life was short, but he has made an impact on the world. Despite never taking a breath outside his mother’s womb, he is helping to ensure a future where fewer mothers and fathers experience the devastating loss of a child to stillbirth.