According to a preliminary report from the Missouri Department of Health and Senior Services (DHSS), abortions in Missouri decreased about 50 percent from 2018 to 2019, after two abortion facilities closed and the state’s only remaining abortion facility lost its abortion license.

From January 1 through November 15, 2019, 1,354 preborn children were killed through abortion at Reproductive Health Services Planned Parenthood (RHS) in St. Louis. In 2018, 2,910 abortions were committed at the three abortion facilities in existence at the time. That’s a 53 percent decrease in abortions based on preliminary data from the state DHSS.

According to the pro-life watchdog group Operation Rescue, an abortion pill facility in Kansas City and a surgical abortion facility in Columbia, both Planned Parenthood affiliates, stopped committing abortions in 2018. 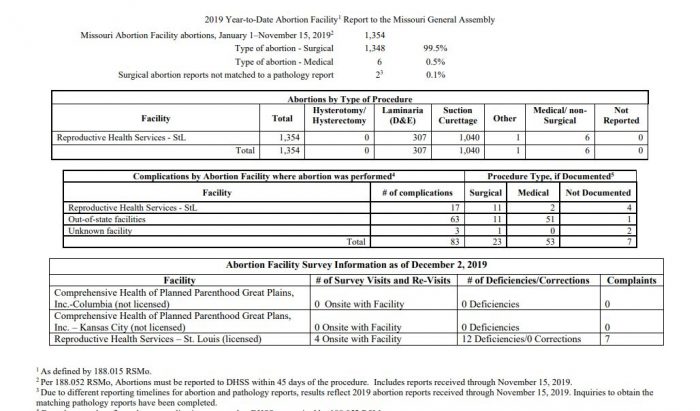 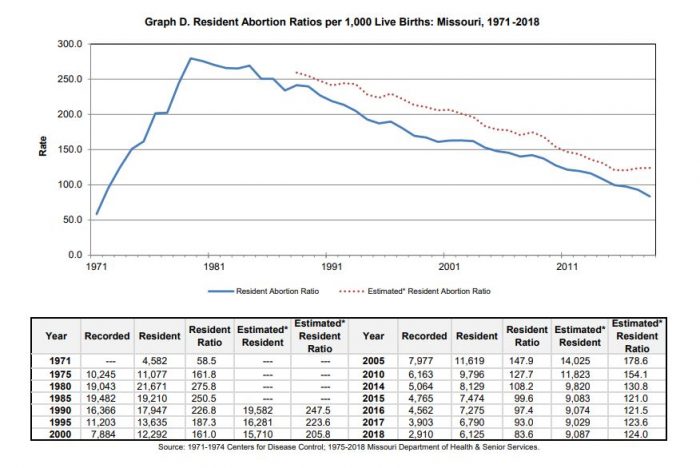 Of the 1,354 abortions carried out at RHS Planned Parenthood in St. Louis during the first 11 months of 2019, 1,040 were suction curettage procedures committed during the first trimester (down from 2,047 in 2018). In 2019, 307 were done using the Dilation and Evacuation procedure, also known as D&E or dismemberment abortions (down from 501 in 2018). Chemical abortions (the abortion pill) and non-surgical abortions accounted for six abortions in Missouri in 2019, down from 359 in 2018. Also in 2018, the report lists an “intrauterine instillation” abortion at 21 weeks and over, potentially pointing to a saline abortion, which burns the preborn child alive in the womb.

According to Operation Rescue, this sudden drop in abortion pill use is due to RHS Planned Parenthood’s refusal to cooperate with a Missouri law requiring a pelvic exam prior to dispensing abortion drugs to women. A pelvic exam would help detect underlying conditions, such as ectopic pregnancy, that could cause complications with the abortion pill. RHS Planned Parenthood decided to send abortion pill patients to an office across the border in Belleville, Illinois, in order to avoid performing pelvic exams. In October, that Belleville facility closed following the opening of a new Planned Parenthood location in Fairview Heights, Illinois, that commits both surgical and chemical abortions. This facility, in its first week of opening, summoned an ambulance for a patient.

RHS Planned Parenthood has come to be known as a dangerous facility with 75 known cases of causing serious injury to women, requiring emergency transport. The facility refused to allow DHSS to interview the abortionists behind the botched abortions.

The report also states that RHS Planned Parenthood received 12 deficiencies during inspections in 2019, none of which were corrected. There were also seven complaints filed against the facility. Those unaddressed issues were the reasoning behind DHSS’ decision to revoke RHS Planned Parenthood’s surgical abortion license last year.

Despite all of this, the facility has been allowed to remain open and continues to commit abortions without a license.

Editor’s Note, 1/15/20: This article originally stated a 78 percent decrease in abortions based on incorrect information on the Missouri Department of Health and Senior Services website. The DHSS has been notified of their error and this article has been updated to reflect the correct amount of recorded abortions in Missouri in 2018.