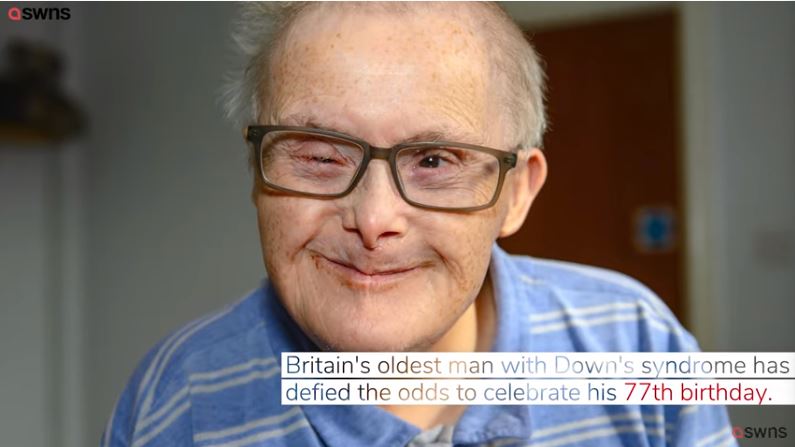 A British man believed to be one of the oldest people in the world with Down syndrome has just turned 77, defying all the odds set before him.

When Georgie Wildgust was born, his mother was told he wouldn’t live past the age of 10. But he has not only lived a long, full life, he was able to work as a gardener and now lives in a care home, where he is much loved by his family and friends. His niece, Nikki Wright, visits him every week. “He is so happy all of the time. He is amazing,” she told the Nottinghamshire Live. “His mum was told he wouldn’t live past 10 when he was born but look at him now! He was always told by his mum that he can do anything and because of that, he has always been very independent. He doesn’t like being told what to do really but I do think that is why he has reached 77.”

Wildgust’s mother died in 1993, which is when he entered a care home, and his older brother died in 2016. His sister, Jean, lives in Australia and keeps in touch via Skype. Wright also explained that his childhood was filled with people who told him he could do and be anything. “Nobody picked on him; they all took him under their wing and looked after him,” Wright told TODAY. “It was one big happy community who looked out for each other. So he’s always been very sociable.”

He continues to live a full life, and even has a girlfriend. “[S]he just moved out and I think he misses her a bit,” Wright said. “But she still comes to visit him and they chat on Skype as well.” The staff at his care home also speaks highly of him. “He is such a miracle. He has been through some medical issues this year and he was put on end-of-life care but he bounced right back,” Javine Lacey told Nottinghamshire Live. “When he came back from hospital, he just said’ ‘y’all right darling?’ like nothing had happened.” Even at 77, he has an active social life, participating in drama classes, dancing, and coloring.

The life expectancy for people with Down syndrome has skyrocketed with the increase of early intervention services and advances in medicine. 30 years ago, people with Down syndrome only had a life expectancy of 25 years; now, it’s more than doubled to an average of 60 years. And while Wildgust has been able to live a happy and full life, in the United Kingdom people with disabilities still face incredible ableism. Abortion, for example, is banned after 24 weeks — unless the baby has a disability, even as minor as a cleft lip, and then abortion is legal, no matter how far along in the pregnancy the mother is.

Families have reported receiving substandard care for their children with disabilities, and doctors in the United Kingdom have been caught giving DNR orders for people with learning disabilities and Down syndrome. But as Wildgust and his family shows, people with disabilities have lives worth living, with meaning and dignity and value.