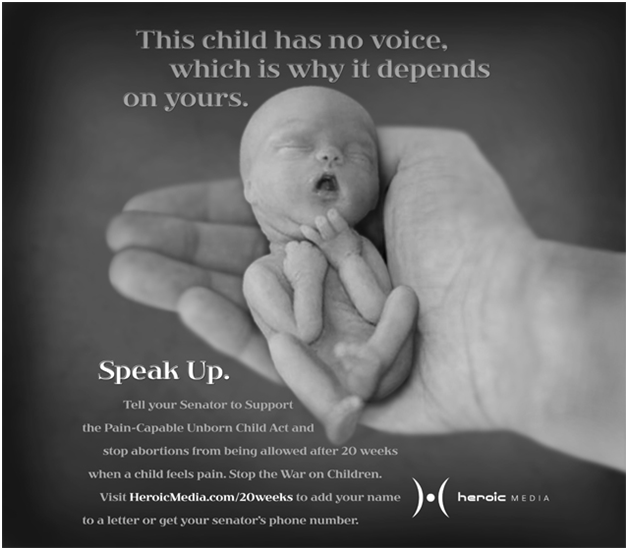 Not a graphic image. Just a helpless child.

A national pro-life organization is outraged after three major American newspapers rejected a pro-life ad as “too controversial.”

The Chicago Tribune, USA Today, and the LA Times refused to run an advertisement created by Heroic Media.

The ad features a hand holding a 20- to 24-week-old baby with the quote, “This child has no voice, which is why it depends on yours. Speak Up.”

Heroic Media Executive Director Joe Young said he was shocked and angered that the media outlets were willing to talk about the issue but were unwilling to show the reality of life at 20 weeks.

“I am disturbed that these papers would run article after article promoting the notion that abortion is a victimless act without consequences,” Young said. “The fact remains, children who are unique individuals – never again to be duplicated – are being killed in the most violent way imaginable and they feel the excruciating pain of that death.”

The newspapers took issue with the image of the baby.

“It seems as though it is okay to talk about the issue in general, but when you actually put a face to the discussion, then it becomes controversial,” Young said.

Last week after the House passed the Pain-Capable Unborn Child Protection Act, Heroic Media put out a statement requesting that the pro-life community contact their senators and encourage them to consider and support the Act.

“Americans deserve to know the truth about the children sentenced to die for no fault of their own and that we have a chance to spare some of them through this legislation,” Young said.

The Pain-Capable Unborn Child Protection Act prevents an abortionist from performing an abortion at or after 20 weeks, based on empirical scientific medical evidence that proves that unborn babies can feel pain. Science shows that at eight weeks after fertilization, the unborn child reacts to touch, and at 20 weeks, the unborn baby responds to what would be felt as pain.

The image shows a 20- to 24-week-old baby in a person’s hands. Heroic Media’s goal was to show what life looks like at 20 weeks. The non-profit organization has resubmitted the ad with a different image, now one of a 20-week-old baby in utero.

The Chicago Tribune has now agreed to run the ad with the second image as long as Heroic Media indicates that it is an advertisement.

“Our hope is that the American public begins to advance this debate with both the mother and child in mind,” Young said.

Heroic Media is a non-profit whose mission is to educate the public in general and reach women facing unplanned pregnancies with life-affirming alternatives through the use of mass media, such as television commercials, internet outreach, and billboards.

“This issue, the late-term killing of developing children, is one that should be addressed in the U.S. Senate, and we encourage our fellow citizens to let their Senators know our desire to see that happen,” Young said.