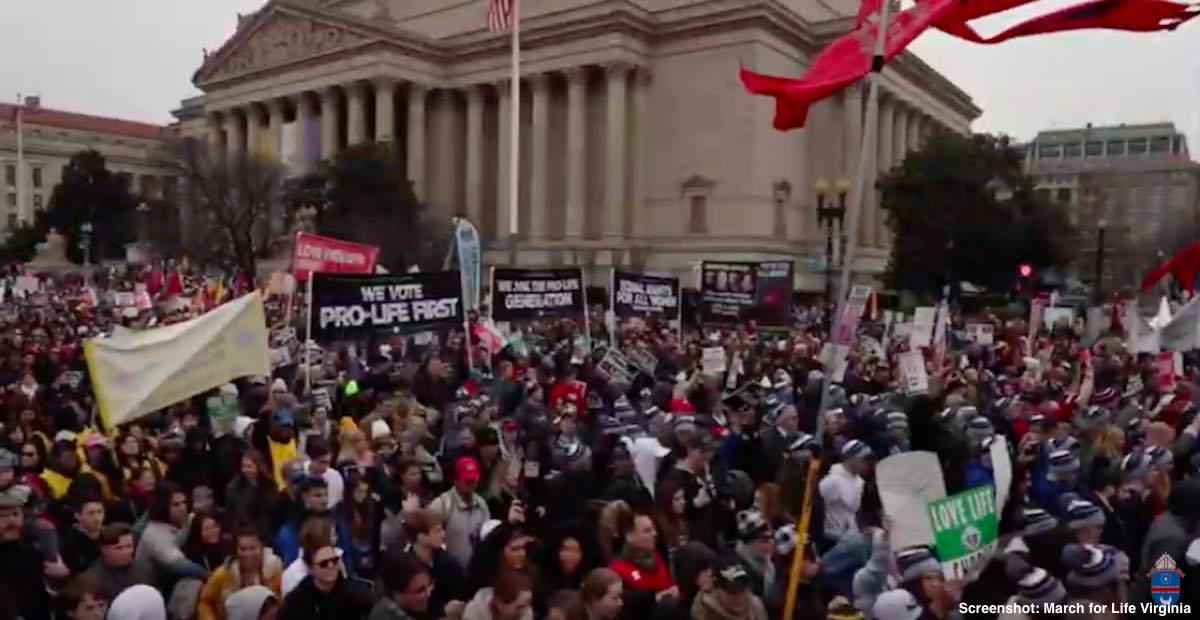 Advocates for protecting preborn children will gather this week for the state of Virginia’s second annual March for Life.

The March will kick off on Thursday, February 13th with 9:15 am Mass at the Greater Richmond Convention Center offered by the bishops of both Catholic dioceses Virginia. The march kicks off with at rally at 11:45. Among the speakers at the rally this year are President of the March for Life Jeanne Mancini, Delegate Kathy Bryon, and Eileen Roberts, founder of Mothers Against Minors’ Abortions (M.A.M.A.). The March itself starts at 12:45.

Last year, after a bill was introduced by then-freshman Delegate Kathy Tran that would legalize abortion up until birth and after Governor Ralph Northam’s comments in support of her legislation and other extreme measures, around 6,500 Virginians rallied in Richmond against the state’s extreme pro-abortion leadership.

Pro-Life Virginia, will you be marching for life on Feb. 13, 2020 in Richmond, VA?
For more details, visit https://t.co/UBZpP1eX7B pic.twitter.com/X8Tto8lJe9

This pro-life demonstration is more important than ever, as the single-party legislature has been working hard to walk back the rights of the preborn, and to eliminate Virginia’s hard-won restrictions on abortion providers that make women safer. In late January 2020, House delegates passed HB 980. The extreme bill would 1) remove the state’s requirement that a woman’s written informed consent be obtained, 2) remove the requirement that a medically necessary ultrasound be obtained, and 3) would allow non-physicians to commit abortions. The bill is currently in a Senate committee.

Even more brazenly, Joint Resolution 2 — introduced in early January and currently before committee — is a proposed amendment to the state’s constitution that would enshrine abortion as a constitutional right in the state.

Delegate Kathy Byron spoke on the floor during debate for HB 980 and pointed out the legislation in question isn’t actually pro-woman, as many supporters claim, and underscored the fact that abortions will become more dangerous if the measures are allowed to pass. “If those who supported this legislation truly trusted women, they wouldn’t subject them to a serious medical procedure without being allowed to see the test results [e.g. ultrasounds], performed in a medically substandard facility, by someone other than a doctor. That isn’t trusting women. That’s a recipe for abusing them. […] If you care about the safety of women, if you’re truly committed to equality […] don’t deny them the standard of care to which they’re entitled.”

Faced with the prospect of the state becoming another New York when it comes to abortion rights, the need for Virginian pro-lifers to speak out is all the more urgent. This year’s March for Life could be critical to future pro-life endeavors. Although pro-life Virginians face an especially difficult battle, as last year’s pro-life backlash that helped to table Rep. Tran’s bill shows, pro-lifers can make a difference when they come together and raise their voices.