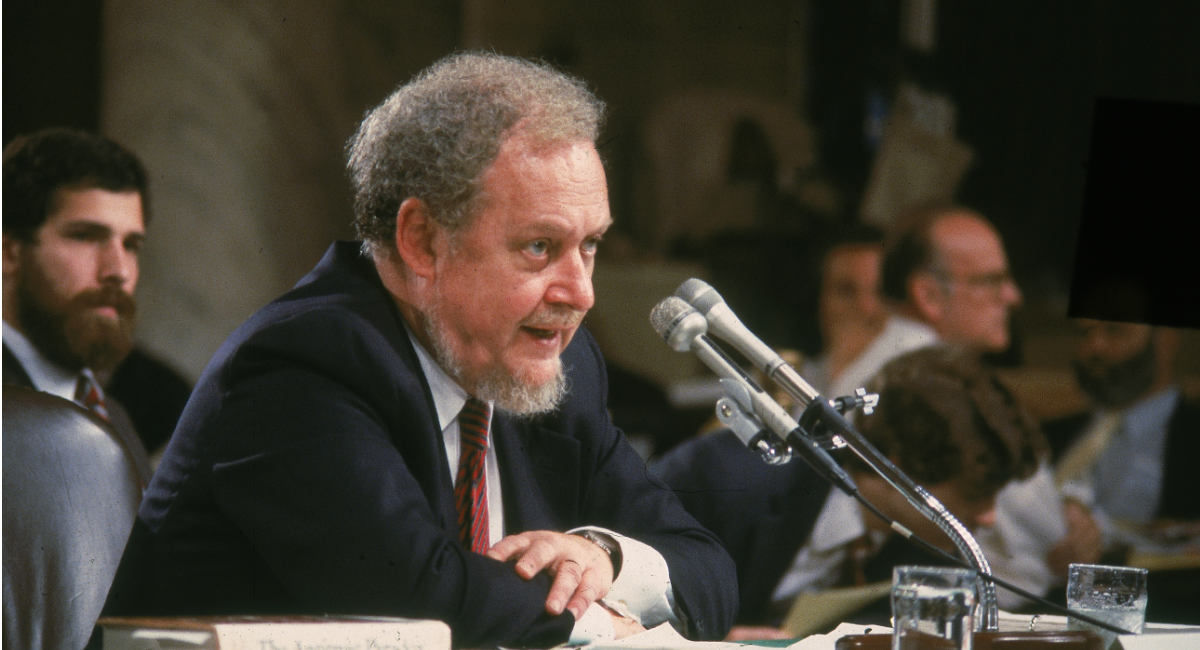 In early May, President Joe Biden boasted about leading the fight to foil President Ronald Reagan’s 1987 Supreme Court nominee Judge Robert H. Bork’s ascendence to the High Court. Bork, a Yale Law School professor by profession, was the 35th Solicitor General of the United States (1973 to 1977), and later served on the U.S. Court of Appeals for the D.C. Circuit from 1982 to 1988. During his time as Solicitor General, Bork was briefly appointed Acting U.S. Attorney General from October 1973 to January 1974.

While Bork’s occupancy on the Supreme Court was pillaged by the then-Senator from Delaware, Bork’s words are perhaps what America needs most right now as “killing for convenience,” to borrow Bork’s phrase, has become an insignia of society.

In the early 2000’s, Bork keenly observed the sacramental view that most Americans traditionally had in regard to human life was steadily beginning to subside. The intentional taking of a recognizable individual’s life had become common place, and an easily accepted practice of the modern world. Such an acceptance has only exasperated in the decades following. For Bork, while individuals engaged in a plethora of daily activities that were known to cause death (driving automobiles, constructing buildings), the conscious choice to quell the life of a human being had never been regarded as a matter of moral indifference.

READ: Let’s be clear: Abortion is always an intentional act of killing

When it came to abortion, Bork made sense of the idea by asking two potent questions. First, is abortion always the killing of a human being? If it is, is that killing done simply for convenience? As Bork would say at the time, “I think there can be no doubt that the answer to the first question is yes; and the answer to the second is almost always.” Also, curious in Bork’s eyes was the repeated narrative of “choice,” “reproductive rights,” and “medical procedures.” Is this language not relatively odd when describing the act of ending the life of a human-being who has zero “choice” in the undertaking? Bork witnessed an alteration in how society defines what exactly it means to be a human being, and it was this transformation of society that fretted Bork the most.

Bork strongly objected to Roe v. Wade (1973) based on Constitutional grounds, believing it to be a fundamental contortion of the Constitution and nothing more than the Supreme Court’s encroachment on us of the morality of our cultural elites. The Constitutional bears zero mention of abortion, thereby leaving the matter solely in the hands of the American people and their state representatives. However, Bork’s main qualm with the Court’s majority opinion was this newly revisionist attitude toward life and death. Redefining what it means to be a human being will prove hazardous beyond the abortion debate.

If abortion is looked upon as a constitutional right, Bork predicted that assisted suicide and euthanasia would soon follow. How long until the act of ending an individual’s life would apply to the elderly, or those deemed a burden by society? For example, at this moment, ten states and Washington, D.C., commonly referred to “Right to Die” states, have legalized physician-assisted suicide via legislation. One could forecast that this number will continue to rise.

The intentional act of decimating an unborn child, a human being with characteristics and features, reflects a society’s tragic heedlessness to the most innocent among us. If the growing sentiment among the body politic is “killing for convenience” in the womb, then we should not be surprised when measures are put in place to end the lives of those who are ill, fading, or those who some might deem inconvenient.