At the University of North Georgia, some students put on a celebration recently. What were they celebrating? Abortion, of course. With cookies.

As UNG Students for Life reported, members of the Skeptics Society encouraged visitors to take fetus shaped cookies and give reasons why abortion should stay legal. Examples ranged from, “A woman controls her own body,” to, “My vagina is too pretty to let a fetus crawl out.” And then there was this: 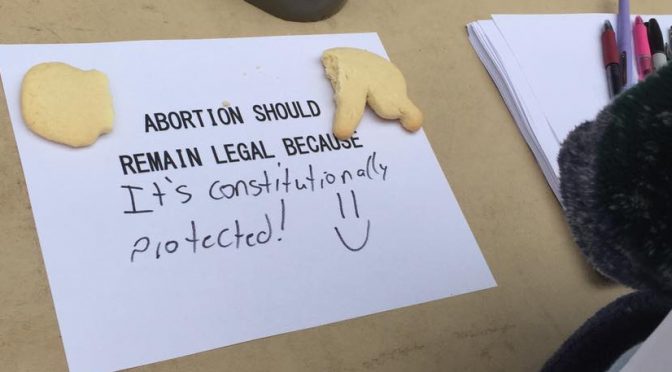 It’s common to hear how “abortion rights” are protected in the Constitution. When confronted with that argument, it’s best to respond with a single question.

You’ll typically get a puzzled look, which shouldn’t be surprising. After all, even the Supreme Court struggled to find an answer.

In Roe v. Wade, the Supreme Court discovered a constitutional right to abortion. That’s interesting, because nowhere in the Constitution does the word “abortion” even appear. They got around this by claiming abortion falls under the “right of privacy.” Where’s that right spelled out? It isn’t. Justice Harry Blackmun wrote the majority opinion in Roe, and even he admitted “the Constitution does not explicitly mention any right of privacy.”

How do you go about finding rights that the Constitution makes no mention of? I’m gonna let Justice Blackmun explain that himself.

In a line of decisions, however, going back perhaps as far as Union Pacific R. Co. v. Botsford, 141 U.S. 250, 251 (1891), the Court has recognized that a right of personal privacy, or a guarantee of certain areas or zones of privacy, does exist under the Constitution.

So, cases about pornography, police search procedure, telephone wiretap use, foreign language instruction, private education, interracial marriage, birth control, and the distribution of religious materials all add up to a “right of privacy.” OK…and why is abortion part of it? I don’t know–Blackmun just insisted that it was.

Also mentioned was “the detriment” of being denied the chance to abort. Dr. Anthony Levatino has performed over 1200 abortions, and in the video below, he describes what’s done to fetuses in the second trimester. Watch it and decide how much detriment they experience.

Not that children in the womb are the only ones for whom abortion has been detrimental: in case after case, child sex predators have used abortion to cover up their crimes and keep abusing their victims. Apparently Blackmun didn’t anticipate that.

This all helps to illustrate how important judicial appointments are, which is why pro-lifers should tell the presidential candidates it’s not something we’ll compromise on. While a right to abortion might be popular at the cookie table, you won’t find it in the Constitution. We need judges who are able to see that.