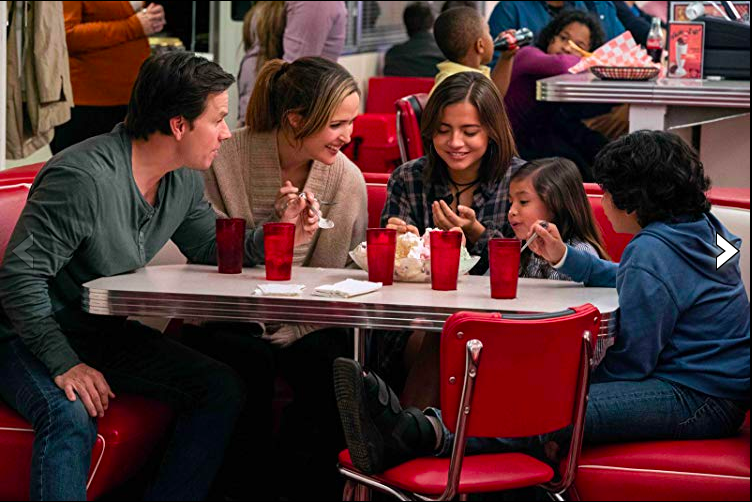 What begins as the previously childless (by choice) couple’s venture to foster saucy teenager Lizzy grows to include her anxious, accident prone brother Juan and domineering sister Lita. The dynamic that ensues is a refreshingly real and amusing look at life with children minus the trite, grotesque humor too often applied to family comedy. Rather than treating a larger-than-average set of children like an anthropomorphized herd of swine that can’t be housebroken, “Instant Family” shows them as individuals like any developing characters: flawed and growing.

The story is told with an earthiness that earns its PG-13 rating (one f-bomb is dropped). But while this should be discussed ahead of time before a family movie night viewing, the grittiness isn’t superfluous. It is dedicated to a realistic story.

After all, it’s rooted in writer/director Anders’ own experience as a foster and adoptive parent of three. “It started out exactly the same way it does in the movie,” Anders says of his parenting story in a Today interview. “I made a stupid joke one day and said, ‘Why don’t we just adopt a 5 year old and it’ll be like, ‘I got cracking 5 years ago,’ and my wife just kind of ran with that like Rose does in the movie.”

Anders also included on set people who had been fostered and adopted, like casting director Sheila Jaffe, whom Walhberg recommended for the project. Production assistant Maraide Green was adopted out of foster care and is thrilled “that there’s now a film out that addresses foster care and adoption, but in a positive light.”

That was a key goal for Anders, who tells Tribute, “I think the main reason why so many kids languish in the system and people don’t step up for them is because of fear. We’re all afraid of who these kids are and what they bring with them. So my hope is that the movie will take away some of that fear and lead to kids really finding permanent homes.”

“If nothing else, I hope that the movie makes people feel more positive towards these kids so if someone in their family or someone they know wants to foster or get involved in that way, that they’ll be more positive than people sometimes are.”

It’s already had that effect on lives involved in the production. Octavia Spencer, who plays spunky social worker Karen in the film, says in a Today segment that she “was on the fence about whether or not I wanted to open my home to kids” until working on the film. “It was like there’s this divine message being brought forth from this project, so I literally knew the moment that I read it that I wanted to do it.”

READ: Teen brings adoptive mom to tears: You’re ‘the best thing that ever happened to me’

“Instant Family” features real foster system scenarios, but of course doesn’t represent every foster parenting experience, especially because the process may differ by civic locale. Confessions of an Adoptive Parent and Foster Parenting Podcast are good resources for those curious about the film’s moments of accuracy and artistic license from the perspective of parents who have foster experience.

In the movie, Pete and Ellie are welcomed into a diverse community of foster parents — including an evangelical couple and a gay couple — who meet regularly to share each other’s struggles and progress. The social workers, Karen and Sharon, are delightfully multidimensional characters throughout the film with their polar opposite personalities. There might be a joke or two that doesn’t land well, but overall, “Instant Family” harmonizes laughter and tears.

Pete and Ellie eventually learn that parenting — especially adoptive parenting — is no mere accomplishment of transforming children through a renovated environment. Rather, it’s a matter of resilient relationship. A child’s struggles and relapses don’t devalue the child or the parents. The value of life is not conferred by ease. Quite simply, as a veteran adoptive parent tells the couple, “things that matter are hard.”