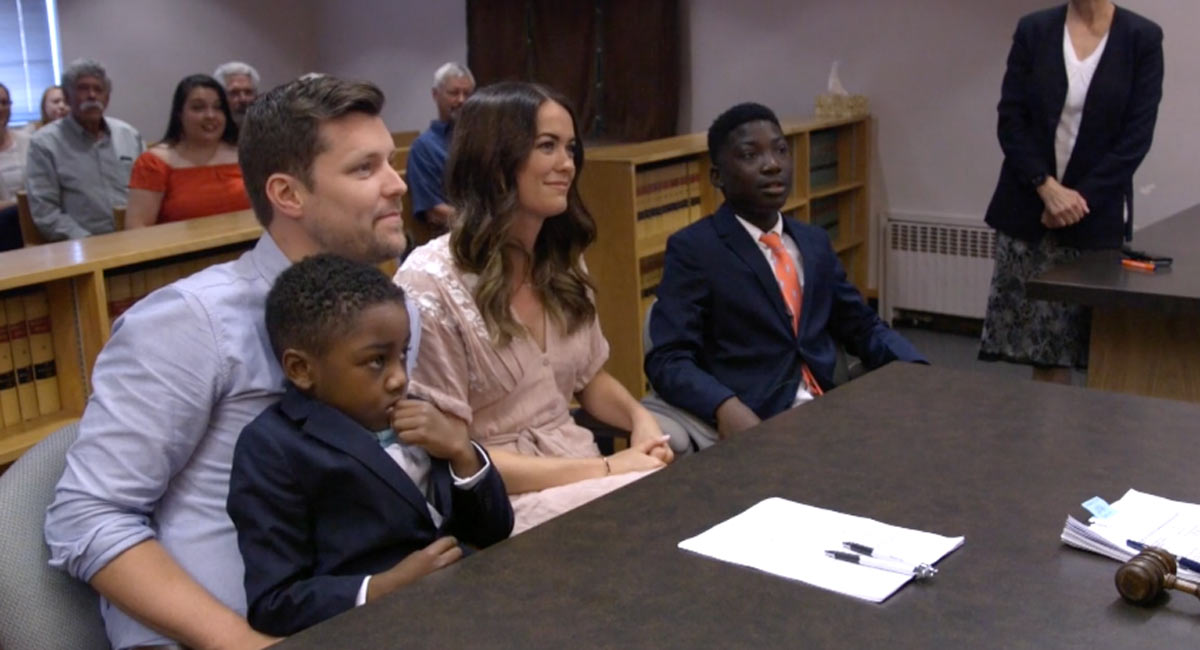 A video of one family’s adoption day is touching hearts and raising awareness about the need for foster families.

Four years ago, Sarah Cozad and Stuart Shank got married and started the process of becoming licensed foster parents in their home state of Washington. Cozad wrote on The Archibald Project that as they were in their early twenties, she and her husband thought they would foster babies and toddlers, not older kids.

However, after they began fostering a three-year-old boy, Michael, they had the opportunity to foster his brother, Dayshawn, who was 10 at the time. Cozad told Good Morning America, after meeting Dayshawn on a supervised sibling visit, they fell in love and opened their home to him, too. On August 13, 2018, Michael and Dayshawn, now six and 13, legally became their sons.

A video commemorating the official adoption day captures Dayshawn’s moving words about his love for his adoptive family. He told the judge, “They’re just really the best thing that ever happened to me.” As his mother wept tears of joy at his unexpected tribute, Dayshawn added, “If I could wish for anything in the world, I just wish that I could just love these people for the rest of my life.” Now that the adoption has been finalized, that’s exactly what he can do.

The judge, clearly moved, said “If I had any doubts [about the adoption], they’re gone!” The emotional adoption video features the beautiful photography by NW Creatives, including images of the boys with lettered signs that read: “Chosen. Loved. Adopted.”

Addressing the family and friends who traveled to celebrate the adoption, Cozad says in the video, “It’s been a long time coming, and we couldn’t ask for better kids. We are so privileged and honored that we get to be Dayshawn and Michael’s parents.” Another sign featured in the video reads, “I’ve shared their hearts and home for 947 days. But as of today, I share their last name” — evidence of the years it has taken to make Dayshawn and Michael’s forever family official.

The family continues to foster children, which Cozad says the boys were eager to continue. Over the past three years, Cozad and her husband have fostered 14 children, and Cozad shared on Instagram how her view of foster care has changed. She wrote, “After a few years and a lot of trial and error, I now understand that one of the best ways to advocate and love these kids, is to advocate and love their parents.” The family is committed to the ultimate goal of foster care, which is reunification. Unfortunately, Cozad says, that was not possible for Dayshawn and Michael, but they have loved being able to adopt them.

Cozad posted a picture of the moment Dayshawn told the courtroom how he felt about his adoptive parents. In the caption she wrote, “If someone told me 5 years ago I would be 26 and adopting a teenager, I would have thought they were crazy. Now I can’t imagine it any other way. I’m sharing this in hopes that anyone who is considering fostering doesn’t rule out older kids & teens. It’s not always easy, but it is so, so worth it.”

In addition to fostering and advocating, Cozad now teaches classes for other foster parents in the state of Washington. As she told GMA, “No child should feel grateful to have a family love them. It should be a given.” We couldn’t agree more.