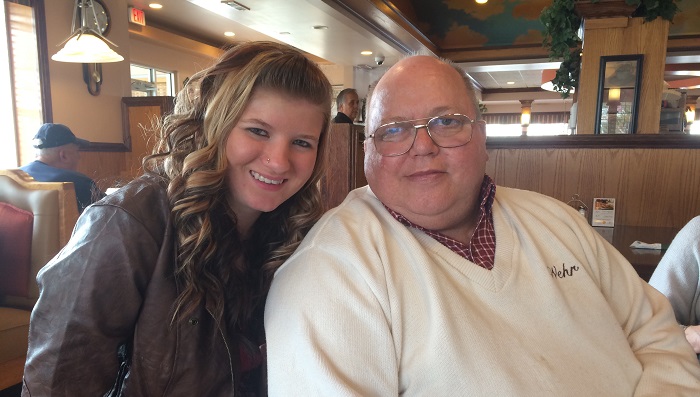 (Pregnancy Help News) – Morgan Hill spent the first few moments after her birth like so many of us do. She was cleaned up, wrapped up, and fed by her mother. However, it’s the shocking moments after this that changed the course of her life. Mired in an extramarital affair, Hill’s biological mother was the only person who knew she was pregnant. She was determined to keep it that way.

While her husband was at work and her stepchild was at school, she secretly gave birth in the bath tub. After feeding her baby and wrapping her in a towel, she put her in the car and proceeded to drive around town, wondering what she should do next.

She ultimately chose to place her newborn baby girl in a garbage bag, tied with a double-knot and placed in a dumpster outside of a medical center in Hoffman Estates, Illinois.

It was a cool evening in October 1995. The dumpster was full and was scheduled to be picked up the next morning. Hill’s story could have easily and quickly ended right there in that dumpster. However—providentially—a nearby construction worker named Garold “Rocky” Hyatt heard a noise as he threw away some debris.

What Hyatt did next saved little Morgan Hill’s life.

“He heard a noise, heard it again, and saw the garbage bag move,” Hill told Pregnancy Help News. “He went into the medical center and said he believed there was a baby in the dumpster. The nurses ran out. One of the nurses, Carol Szafranski, picked up the bag, opened it, and found out it was a baby girl.”

The medical team rushed Hill into the medical center and named her “Mary Grace,” since they considered her a miracle from God. Over the next few days, law enforcement used surveillance footage to track down Hill’s birth mother and, eventually, her biological father as well.

As the story spread across news outlets nationwide, Hill’s biological father won a hard-fought battle for custody. But, already a single father, he eventually placed his baby girl into the hands of an adoptive couple he’d come to know and trust. 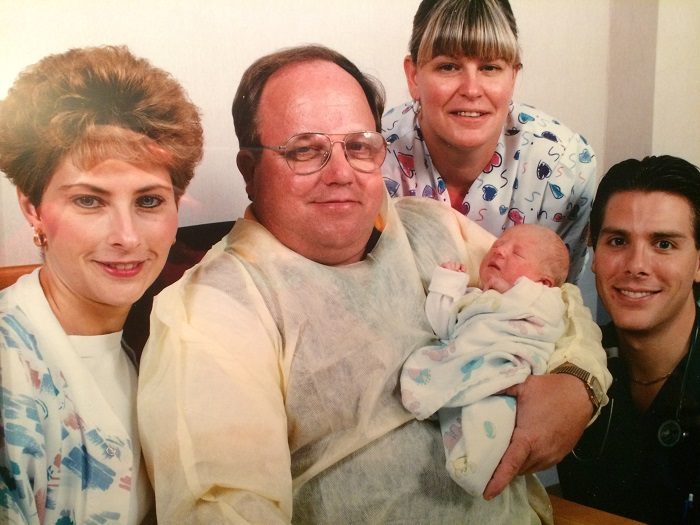 Rocky holds baby Morgan with the hospital staff after he found her as a newborn in the dumpster. Photo courtesy of Morgan Hill.

A Turning Point in Life

Hill grew up knowing she was adopted, but was unaware of her amazing journey into her family. At her high school graduation party, her niece made an off-handed comment that led Hill to press for the full story.

For the first time, Hill’s mother shared with her the heartbreaking first hours of her life.

“Over the 18 years, she’d kept a binder full of article clippings from newspapers, online, and pictures as well as records of my biological mother that she showed me to explain who I was as a newborn and what happened to me,” Hill said. “I did reach out to different places to find the people who cared for me as well as my biological father, and my mom was so supportive and so helpful with this.”

Hill was able to connect with her birth father—who had kept the same cell phone number for 20 years in hopes that she would call him one day. In 2016, at 20 years old, Hill met with a news reporter who helped reunite her with the first responders who saved her life.

(Read more about that reunion here.)

“Christa—the news reporter who surprised me with this—she kept my attention by having me read one of the articles my mom kept and she asked me to repeat the construction worker’s name, which I did, and then all of a sudden she tells me that he just walked into my house,” Hill said. “I turned around and just burst into tears. I’d been looking for him for two years and didn’t have any luck. But they went through the trouble of finding him and flying him out to meet me.”

Meeting Hyatt and Szafranski was a turning point for Hill. During their conversation, Hyatt gave her a commemorative golden angel pin the Department of Children and Families had given him on the last day he held her, when she was just three days old.

Hyatt had held onto the pin for 20 years.

“I wear that pin as much as I can and have it with me wherever I go,” Hill said. “I look at Rocky like my guardian angel. He’s the one who saved my life. He doesn’t believe in luck. He believes that God gave him this opportunity. That God wanted him to find me.

“That has changed my perspective so much because at the time of hearing my story for the first time, it made me think what a horrible world we live in.” 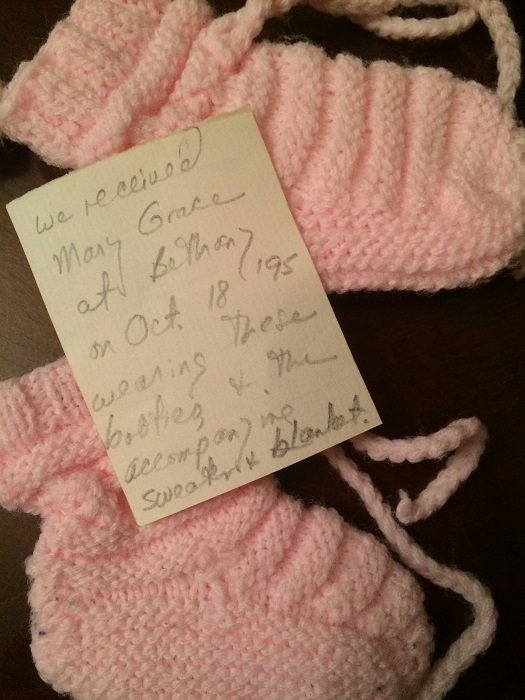 A note from the hospital staff reads that newborn Morgan was found in the dumpster wearing bink booties with a sweater and blanket. Photo courtesy of Morgan Hill.

On a Life-Saving Mission

With a renewed perspective following the meeting with a handful of people who’d saved her life, Hill has become an advocate for state-level Safe Haven laws that are meant to give women in her birth mother’s situation a way to safely relinquish their newborn babies.

Since the first Safe Haven laws were first enacted in individual states in 1999, birth mothers have rescued over 3,527 newborns through Safe Haven laws. In that same stretch of time, 1,393 babies were abandoned nationally— more than 750 of whom died before they were found, according to statistics kept by the National Safe Haven Alliance (NSHA).

“Morgan’s story touched my heart, I cried, I smiled and I thanked God for the people that found and saved her,” NSHA executive director Heather Burner said. “I think her story offers a unique perspective from a young woman that has been raised by a loving family and knows her father and his love, but her story is so very rare and I think God can use it for something good.

“Her close call became a miracle of life for her, her father, her adoptive family and I think a woman in crisis may hear this and choose life over different alternatives.”

For Hill, the Safe Haven laws that have come into existence since her birth offer a ray of hope for expectant mothers who are too scared to tell anyone about an unplanned pregnancy. Rather than abandoning their babies, mothers can bring their newborns to a Safe Haven location, including hospitals in every state. 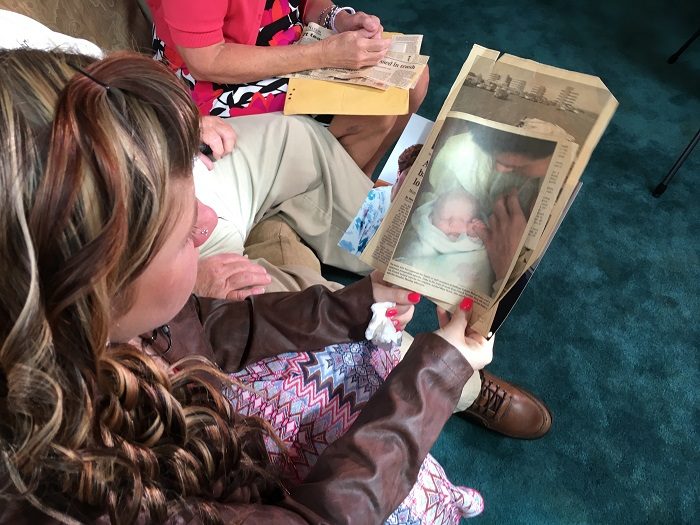 Morgan looks at a photo of her as a newborn when she was found in a dumpster. Photo courtesy of Morgan Hill.

In Illinois, where Hill was born, a person can take their child up to 30 days old to a hospital, medical center, a staffed firehouse or a staffed police department. Laws vary from state-to-state, and one reason NSHA—which runs a hotline (1-888-510-BABY)—exists is to provide updated information on where mothers can go in each state.

While Burner, Hill and others celebrate the lives saved through Safe Haven laws so far, there’s plenty of work to be done—particularly when it comes to making women aware that the option exists to safely, anonymously place their baby into the arms of first-responders and medical personnel.

In fact, during one five-day stretch this February, four babies had been found dead in dumpsters throughout the U.S.

With her story to tell, Hill is on a mission to get the word out about Safe Haven.

“My main reason for speaking out is to show that there’s help out there—that no one’s alone,” Hill said. “I don’t want any other child to be put in a dumpster like I was. If my story saves at least one life, it was definitely worth telling.”

This story first appeared at Pregnancy Help News and is reprinted here with permission.