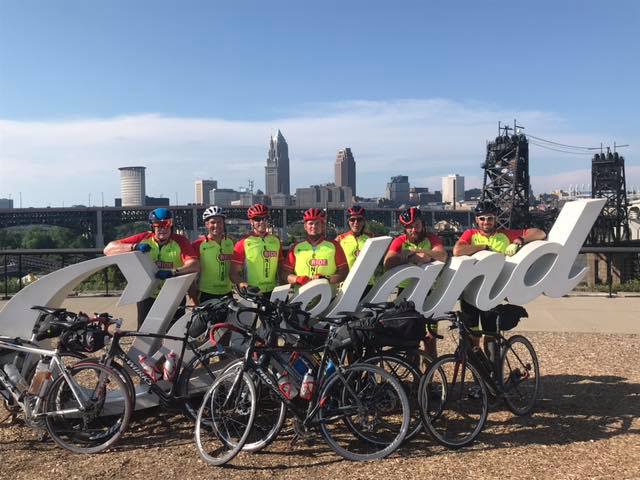 2019 has been the summer of athletics and outdoor activities for the sake of the pro-life cause. Live Action News has previously featured walkers, bikers, and a triathlete raising funds for pregnancy centers as well as awareness of various aspects of the pro-life cause. During the three-day Ernie’s Ride from August 2-4, seven cyclists biked 320 miles from Cincinnati to Cleveland, raising both awareness about the incredibly high abortion rate of babies diagnosed prenatally with Down syndrome and $22,500 for two Ohio pregnancy centers.

Ernie’s Ride founder Doug Shope started the ride solo in 2014. That year, he read in a news article that in Iceland virtually 100% of babies diagnosed in the womb with Down syndrome are aborted.  Shope was personally floored by the story, considering his own positive experience growing up with his uncle, Ernie Nicholson, who had Down syndrome and lived to see his 58th birthday. In Ernie’s bio on the Ernie’s Ride website, Shope describes his late uncle as “definitely memorable.”

He writes of Ernie, “Ernie was different, very different, from almost everyone else that I knew. The world in which he lived was different. Physically, it was small – – not much beyond the inside of my grandma’s house, spiced up with a daily trek down their short driveway to pick up their copy of the Arkansas Democrat or to carefully and deliberately retrieve letters from the mailbox by the road. Imaginatively, though, Ernie’s world was wide open.”

Shope shares that Ernie kept several boxes “crammed full” of prized pictures- pictures of family, friends, acquaintances, movie stars, and he had a story for each and every one. Shope continues, “Sometimes when Ernie told me about me, he actually displayed a picture of me. Most of the time, however, his gentle, pale-white hand grasped a newsprint, gray-scale, boyhood image of some celebrity. Sometimes it was a young John Wayne. Other times maybe Mickey Rooney or someone lesser-known. I couldn’t tell and it didn’t matter. What mattered was that I always knew that I mattered to Ernie….What mattered was: I had a story. And my story had a place in Ernie’s stories. In Ernie’s heart. And Ernie took the time with me to share those stories. ”

In truth, though, one tremendous gift that people with Down syndrome give the world is an understanding that our value is not in what we do and achieve but simply in who we are. Every human life is unique, precious, unrepeatable. Ernie Nicholson understood that, and thanks to his nephew’s efforts, many more people now will too.