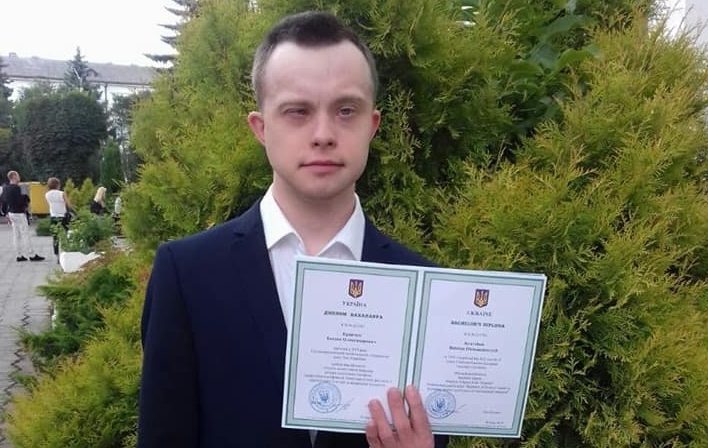 One of the thousands of graduates celebrating at universities across Ukraine this year made history by receiving his degree. The Kyiv Post reports that Bohdan Kravchuk became the first Ukrainian with Down syndrome to earn a bachelor’s degree.

The Kyiv Post was unable to reach Kravchuk and his family for an interview, but in an interview with another media outlet, Kravchuk said now that he has graduated he is seeking “to find a job, work, have a family and provide for it and help my mom and dad.”

Kravchuk studied history for five years at Lesya Ukrainka East European National University in Lutsk. Anatoliy Shvab, dean of the history department at the university, told the Kyiv Post, “Now I can say that he has learned material from the curriculum and his answers during the exam were informative enough to give him a high grade.”

Shvab added that Kravchuk not only completed his studies, but also formed friendships and was an integral part of the community, saying, “Students like Bohdan need a lot of individual work. At the same time, socialization and communication with peers are essential for them.” Shvab concluded, “That is why I think inclusive practices should be developed more in the modern system of education.”

READ: Man with Down syndrome wins prestigious ‘Entrepreneur of the Year’ award

This attitude has led to a horrific culture in which parents are suing their doctors claiming their child with Down syndrome should have been aborted. What does this say to the people currently living with Down syndrome and how can our society better ensure positive outcomes instead of killing the most vulnerable?

Despite the persistent and lethal discrimination against individuals with Down syndrome, these goals are increasingly attainable with early intervention and streamlined classroom experiences for children with special needs. Children with Down syndrome were institutionalized just a few decades ago, but now are showing the world that they are fully capable of a wide range of feats previously thought unattainable.