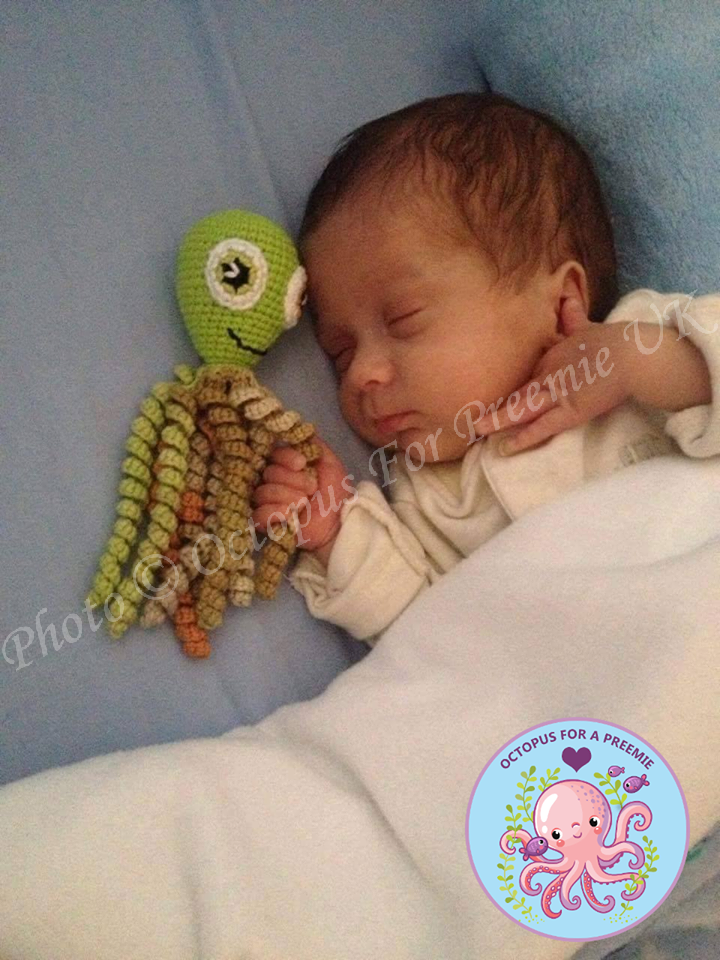 In February of 2013 in Denmark, a group of volunteers began what is known as The Octo Project. They crochet adorable octopi that are helping premature babies feel more secure. The project seems to be leading to improvement in the tiny children’s health.

“While they may seem like an unlikely bedfellow for the babies on the neonatal unit these octopi are linked to better health and wellbeing,” Poole Hospital wrote in a press release. “It is thought the tentacles remind babies of the umbilical cord, and being in their mother’s womb, making them feel safer.” 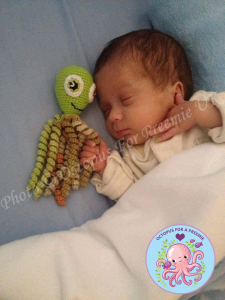 The octopi help babies keep calm, which leads to better breathing and keeps their heartbeats regular, allowing for higher levels of oxygen in their blood. In addition, the babies who were able to cuddle an octopus were less likely to pull on their monitors and tubing, potentially unhooking themselves from necessary devices.

Some of the first babies to benefit from the octopi are twin baby girls born at just 28 weeks and four days gestation. Jasmine and Amber Smith-Leach weighed just two pounds, two ounces and two pounds, 12 ounces and a nurse gave each of them their own personal octopus.

“The girls absolutely love them,” their mother, Kat Smith, told the Daily Echo. “When they are asleep they hold onto the tentacles tightly. Normally they would be in the womb and would play with the umbilical cord so the octopuses make them feel grounded and safe. They really are beautiful.”

Since the project began and word of the success spread, hospitals from around the world have been asking how to get crochet octopi of their own for their premature babies. Hospitals in Sweden, Germany, France, Italy, Turkey, Norway, Iceland, Australia, Israel, and the United States have begun using volunteers to create an octopus for each preemie to not only use in the hospital, but also to bring home with them when released.

Daniel Lockyer, neonatal services matron at Poole Hospital said, “When we heard about the difference a cuddly octopus can make to our tiny babies we were impressed and, after research, eager to introduce them to our little patients. It’s incredible that something so simple can comfort a baby and help them feel better.” 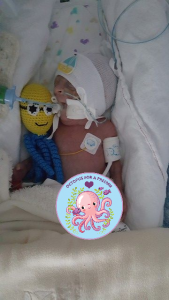 Anyone can begin The Octo Project at their local hospital by visiting the website and downloading the crochet pattern. A list of Facebook groups who focus on making the crochet octopi in their own local areas is here.

“The most important to know is that even if you can’t crochet, we will teach you,” said Mia Pidden, admin for the Octopus for a Preemie UK Facebook group. “We have videos that show every single step of the way. The most important thing is that the tension is tight and there are not holes in the head, as stuffing can come out and it can be deathly for the baby.”

Pidden advises that anyone who wishes to volunteer to create an octopus learn exactly how they need to be made for their local hospitals. Depending on the country, materials and rules can change. She received permission from the creators of the original pattern in Denmark to alter it in order to make it more suitable for the cotton wool available in the UK. Rules include using 100% cotton, stuffing the octopi firmly with filling that can withstand 60 degree C (140 degree Fahrenheit) water during washing, and the head and tentacles must fit certain measurements in order to be safe. Parents should not buy them online because they may not be made correctly.

“The easiest way to get involved is by joining our group, where all the rules, requirements, pattern and other info can be found,” said Pidden. “If there are parents out there with a little baby in the NICU who wish to get one, they can contact me directly or join the group and we will do our utmost to help accommodate as many parents as possible. Being a NICU mom myself, I know how a lot of these parents feel, and all I can say is, keep a positive spirit, things will work out in the end.”