Medication abortion (the abortion pill) is often more painful than women are led to believe — and when left alone to deal with the remains of their aborted children, some claim they were traumatized by what they saw.  Their horrific accounts are contained in an Indiana court case involving the Whole Woman’s Health abortion chain.

1) “There was so much pain and blood I thought I might die.”

“E.G.” testified that after she became pregnant, she scheduled a chemical abortion where she:

According to the court document, E.G. asked to see the baby during her ultrasound but was told abortion facility policy prohibited it. When she insisted, the abortionist showed her a still shot (a not uncommon tactic) and claimed the baby was not viable.

Like many women, E.G. began to doubt her decision to abort, but when the abortionist said she could not get a refund (a coercive technique), she swallowed the first pill, mifepristone. She took the second pill misoprostol, the following day.

“There was so much pain and blood I thought I might die,” E.G. testified.

“It was transparent yellow, about the size and shape of a tennis ball. When I picked it up, I could see the baby inside. He looked like a little gummy bear. I sat and held him and cried. Then I flushed my baby down the toilet.”

She claimed the abortion led to her later suffering from anorexia, abusive relationships, and post-traumatic stress disorder.

2) “The experience was dehumanizing… and terrifying.”

“L.W.” testified that when she went to Planned Parenthood, the abortion vendor scheduled her abortion “unprompted” and did not inform her of other options. She told the doctor she was scared, but, “[H]e didn’t acknowledge my fear or even look me in the eye. . . . The experience was dehumanizing, isolating, and terrifying. I felt like a sheep led to slaughter, but I took the pill anyway.”

“L.W.” suffered and screamed for hours after taking the abortion pill, describing the severe pain as “more similar to labor contractions than normal cramps” and “incredibly scary.”

“I got in the shower to wash away the blood. Suddenly, I passed a large mass that clogged the drain. Even though it looked like a blood clot, I realized immediately that it must be the baby. Not knowing what else to do, I bent down, scooped it out of the drain with my bare hands and, sobbing, flushed it down the toilet.”

She claims that experience led to her suffering from severe psychological trauma. 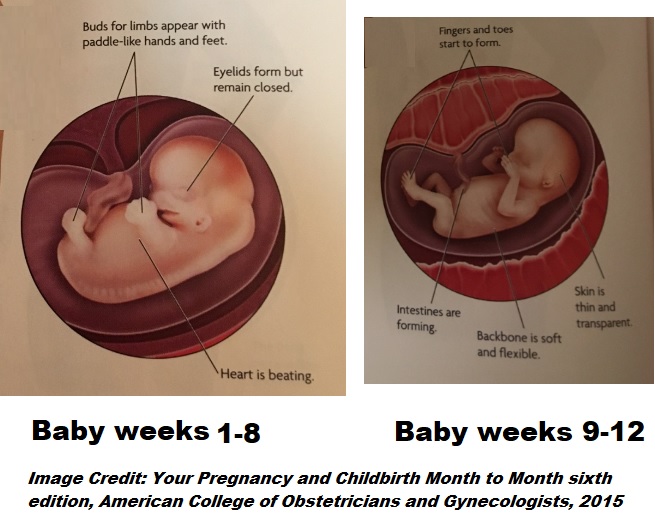 Baby weeks 1 to 8 and 9 to 12 (Image: edited from Your Pregnancy and Childbirth by ACOG)

3) “I had given birth to… a fully-formed, intact 14-week old fetus covered in blood.”

“T.M.” testified that the abortion facility promised she would experience only “light cramping,” “bleeding,” and pass “some blood clots, but no more than a normal menstrual cycle.”

Instead, “T.M.” experienced extreme cramping, similarly severe to what she felt when in labor with her daughter. “It was nothing like they had told me,” she said:

After several hours, “the pain and the urge to push were so intense” that she sat on the toilet. “I pushed until I felt something come out and I heard a sound. I looked down and screamed. It was not just a blob of tissue. I had given birth to what looked like a fully-formed, intact 14-week old fetus covered in blood.”

“I scooped my baby out of the toilet. I sat on the floor and held him and cried. I cannot remember what I did with my baby afterwards,” she said.

T.M. states she continued to bleed profusely “for weeks” and feared she might die. Instead of helping, the abortion facility told her to go to the ER.

This kind of “care” is becoming more prevalent as illegal abortion pill pushers advise women to go to hospital emergency rooms and claim they have miscarried after actually having self-managed abortion.

T.M. said seeing her baby in a toilet led to years of alcoholism and debilitating depression.

“C.C” testified that the abortion clinic told her the medication abortion would be “something like a heavy period.” Instead, she “was in so much pain.”

She claimed her abortion experience resulted in depression.

“K.R.” said when she went for her abortion ultrasound, “the screen was turned away from me so that I could not see the baby.”

“I was told that I would have experience some bleeding, like a heavy period, and would pass some blood clots. They made it sound like it was really not a big deal. They told me nothing about the psychological and emotional side effects of abortion.”

After taking the abortion pill, she testified that she “passed a very large blood clot about the size of a softball. I realized even then that it must be the baby and felt sick to my stomach. I flushed it down the toilet.” After aborting her baby, “K.R.”claims she bled for weeks.

She testified that would have made a different decision if “I could have seen the baby moving or heard the heartbeat.”

Emotional effects from abortion are well documented by former abortion patients. But what will happen when women are left to experience the entire abortion alone, without any medical assistance? Live Action News has documented the abortion industry’s push to get the FDA to remove its safety measures [REMS] from the abortion pill, and expand the pill’s availability online and in pharmacies. If they are successful, we can expect more stories like these.