When the abortion industry speaks about women dying from “home abortions”, they leave out the fact that historically, they were the ones lined up to assist women in obtaining illegal abortions. Today, the trend seems to be continuing. “Abortion AMA: Can I give myself an abortion?” published weeks ago by Bustle and written by Danielle Campoamor, points out that even though abortion is legal in the US, groups like Women Help Women are advising women on “self managed abortions.” 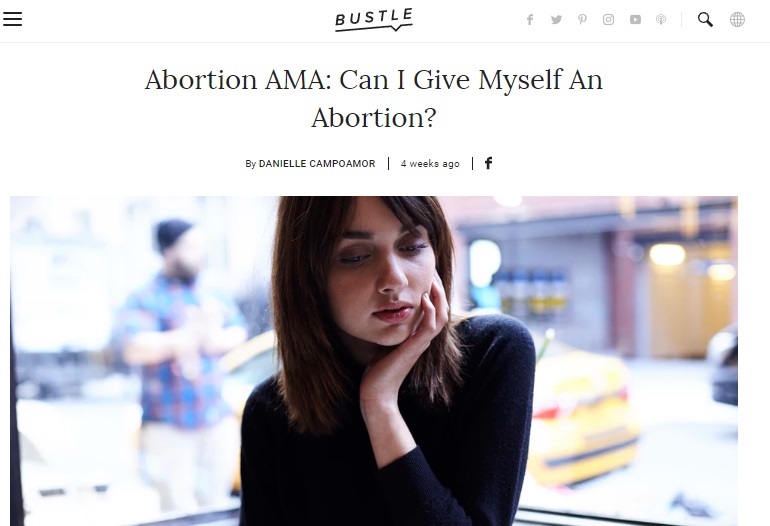 A June 2018 BBC article reported, “By buying pills online and sharing medical advice through WhatsApp groups, women are increasingly turning to technology to sidestep legal barriers to abortion.” Women on Web, an international group that helps women obtain illegal abortions, suggests women lie about complications and tell the doctors they had a miscarriage instead. Despite warnings against purchasing drugs online, activists Francine Coeytaux and Victoria Nichols created the website, PlanC, to push dangerous home abortions.

Joanna Erdman, assistant professor at Dalhousie University’s Schulich School of Law in Halifax, told the New York Times that Plan C is the “same feminist ideology of ‘self-help’ that guided the many safe-abortion initiatives before it, including, most notably, the Abortion Counseling Service of Women’s Liberation, or Jane.”

Today, despite Roe v. Wade remaining firmly in place, the industry is pushing a legal version of “home use” abortion.

The move, being tested in clinical trials, would allow the drug Mifeprex to be mailed to women, or obtained over-the-counter at a local pharmacy. Mifeprex is regulated by the FDA under Approved Risk Evaluation and Mitigation Strategies (REMS), which ensures that Mifeprex is only dispensed in certain healthcare settings by or under the supervision of a certified prescriber.

The abortion-inducing regimen is made up of two pills: Mifeprex, also known as mifepristone, and misoprostol, which, according to the FDA, will end “an early pregnancy (70 days or less since the first day of the last menstrual period).” Of course, “the pregnancy” is a term for ending the life of a preborn child in the womb. But sometimes these chemicals also claim the lives of their mothers. This process is explained by Dr. Anthony Levatino in the video below:

Between May 2009 and February 2011, Clinical Trials “to assess the acceptability of home-use mifepristone” were conducted and reviewed in the United States, Moldova, and the Republic of Nepal, sponsored by Gynuity Health Projects. The sponsor sought to recruit 615 women between 18 to 55 to enroll in the non-randomized study, Uptake and Acceptability of Home-use of Mifepristone for Medical Abortion. The trial within the USA included locations in three states — Georgia, New York and Pennsylvania:

Gynuity was founded in 2003 by Beverly Winikoff, M.D., M.P.H, and according to the website, “Winikoff was employed… at the Population Council.. Prior to joining the Council in 1978, she was Assistant Director for Health Sciences, The Rockefeller Foundation.”

Senior Clinical Adviser Paul Blumenthal also currently serves as a member of the Board of Directors of the National Abortion Federation (NAF).

Gynuity is funded by organizations known for their support of abortion and population control, including: 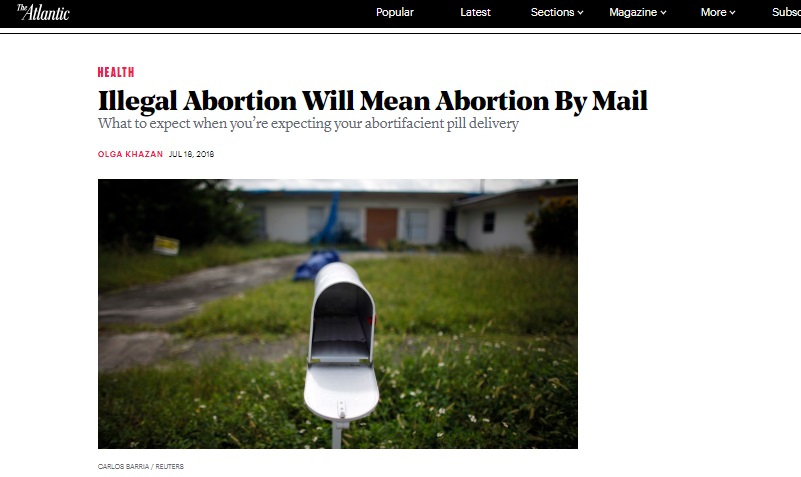 Abortion by Mail (Screen: The Atlantic)

A report published by the pro-abortion journal Contraception, Acceptability of Home-use of Mifepristone for Medical Abortion, reviewed a trial conducted from May 2009 through November 2010 at “four urban, demographically diverse clinical sites in New York City, Philadelphia and Atlanta…” which reported, “Four women in the home-use group and five women in the office-use group reported visiting the emergency room (ER) for care related to their abortion.” 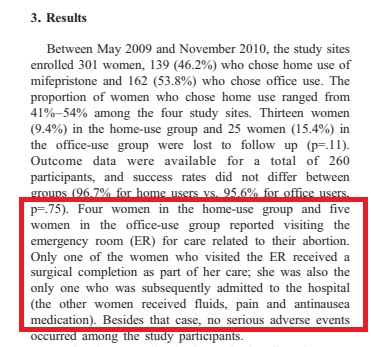 A white paper overview written by authors at the Jacobs Institute of Women’s Health at George Washington University states, “More recent studies include one involving 400 women who received care at six US Planned Parenthood centers.” The Planned Parenthood home use study was conducted between April 2013 and June 2014, and results were published in Contraception, titled A prospective, non-randomized study of home use of mifepristone for medical abortion in the U.S, in 2015.

Abortion promoters are currently recruiting for a study at sites in California and Washington, where women will obtain the abortion pill regimen from the pharmacy instead of in the facility itself. Gynuity is also conducting clinical trials for the “Feasibility of Medical Abortion by Direct-to-Consumer Telemedicine,” or “mail order” abortion pills at select locations, including Planned Parenthood.

A website, Teleabortion, has even been created to recruit for this experiment.

While activists in favor of Roe and their complicit media allies claim abortion is safe, recent FDA reports indicate that almost a dozen women, who obtained pills at medical facilities, have died from it, and a thousand have been hospitalized.

The real numbers may be difficult to track since, as Live Action News has previously documented, nearly half of all states do not require complications be reported. In addition, women suffering complications may present to the emergency room claiming they are suffering a miscarriage, without telling the truth about what has really happened.

In the years leading up to Roe v. Wade, advocates openly admitted that a majority of “illegal abortions” were being performed by “reputable physicians.” Past Planned Parenthood president Alan Guttmacher admitted to the Harvard Crimson in 1967 that “Seventy per cent of the illegal abortions in the country are performed by reputable physicians, each thinking himself a knight in white armor.”

Regardless of the legal status of Roe v. Wade, women will continue to die, and the blame should be placed solely at the feet of the people who enable the killing to keep happening.