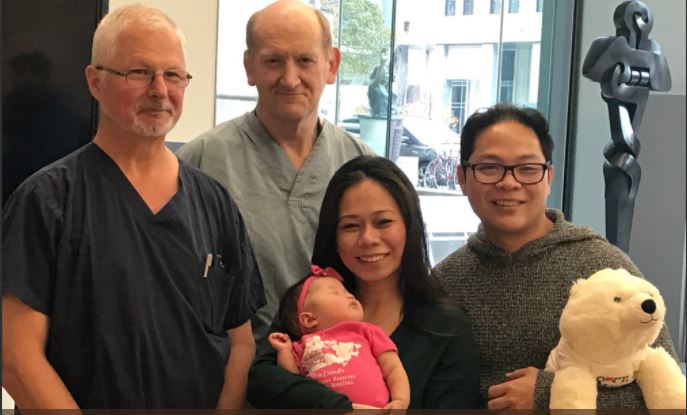 For the first time in Canada, surgeons have successfully performed surgery to repair a form of spina bifida on a baby in utero. The procedure must be performed between 16 and 26 weeks gestation, and while it has been completed in the United States and Australia, Canada had yet to reach this major accomplishment. Abortion is legal in Canada through all nine months of pregnancy.

On Tuesday, November 14, 2017, doctors at Mount Sinai Hospital and the Hospital for Sick Children introduced two-month-old Eiko Crisostomo who was diagnosed with spina bifida at 20 weeks gestation.

“Usually that’s the time when you find out the gender,” Eiko’s mother Romeila Son told reporters at the press conference. “We were very excited to finally have a girl after having four boys.”

First in-utero surgery in Canada for the treatment of #spinabifida a success. Read more about how the teams from #SickKids & @MountSinai helped Baby Eiko before she was even born https://t.co/5LaKOxDuZv pic.twitter.com/8w6qG0G66r

But when Eiko’s parents, Romeila and Romeo, found out their daughter had a form of spina bifida known as myelomeningocele, they were heartbroken. Doctors predicted that their daughter would have brain damage, would need surgeries throughout her life, and would require the use of a wheelchair. They decided to do whatever it took to help their daughter, which meant Eiko would undergo a surgery that had never been done before in Canada.

“I wasn’t scared,” said Romeila. “I had zero doubt and 100 percent confidence.”

On June 4, 2017, at 25 weeks gestation, the medical team prepared to operate on Eiko, giving her anesthesia to protect her from pain and temporarily paralyzing her so they could perform the surgery. The surgery would close the skin over the spinal cord which was protruding into the amniotic fluid.

Eiko was born by C-section on August 19, 2017, and her mother said she is “doing very normal baby things.”

Baby Eiko has been home for 2 months and is doing amazing. Since her birth, she has not needed any further intervention for spina bifida pic.twitter.com/nZYV2JSAAi

“Right now, her brain is stable, her legs are moving and kicking as you can see. All of our prayers were answered,” said Romeila. “She’s our little miracle.”

The surgeons noted that since Eiko underwent the groundbreaking procedure, three more unborn children with spina bifida have undergone the surgery successfully at their hospitals.

Catherine Harper of Auckland, New Zealand, flew to Brisbane, Australia, in December of 2016 to undergo the same surgery on her preborn son who was diagnosed with spina bifida.

“Usually termination is the main option in New Zealand, but there is still a chance you might have an amazing child,” Harper told the New Zealand Herald. “[…] We are trying everything possible to make our son’s life better. […] Anyone that has a kid knows you would do anything for them.”