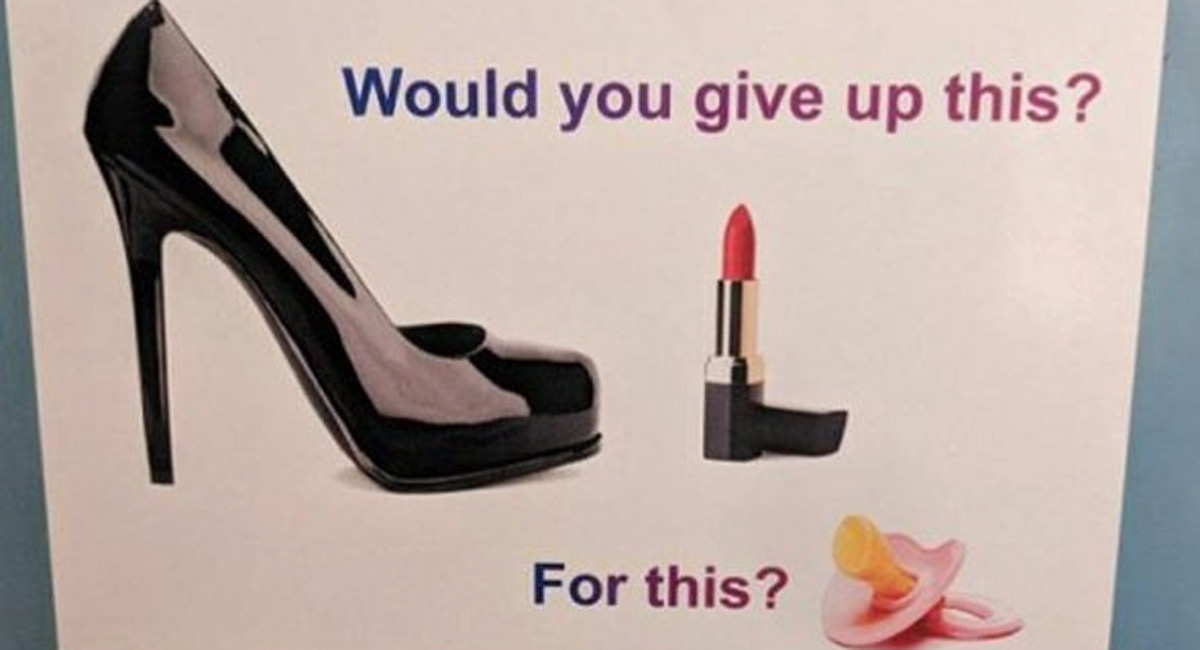 One stunningly offensive ad seems to portray the idea that, according to the NHS, women need to avoid having children so they can continue to look good. The ad, which has garnered international outrage, rocketed across social media, with thousands of people shocked and angered.

The ad features a pair of high heels and red lipstick alongside a pink pacifier, and asks women if they would give up their heels and lipstick for a baby. Women are then told they can get free emergency contraception at Walsall Integrated Sexual Health Services. 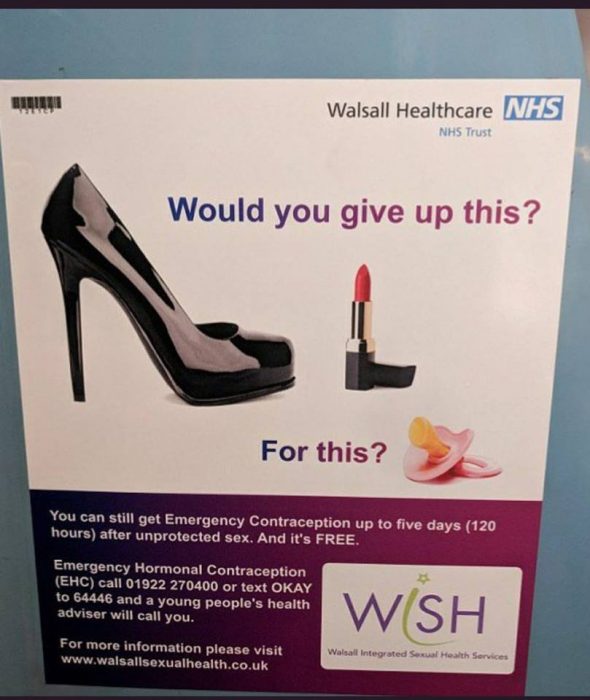 Commuter Kirstie Jones first noticed the photo, snapping a picture and bringing attention to the sexist ad. “I was gobsmacked, I had to look at it again to make sure I’d read it correctly,” she said. “I couldn’t believe it, it’s so irresponsible. It doesn’t understand women, it implies if you are a mother you have to give up certain things. It doesn’t matter what you look like, what lipstick or shoes you wear when you have a baby.”

She continued, “They’ve gone about it in a completely misguided way, it’s an outdated point of view, and it goes against the important message it’s trying to send out – awareness of the free service.”

“Did nobody stop and think ‘are we really going ahead with this?'” she asked.

READ: Studies show all forms of emergency contraception cause abortion

The NHS did issue an apology, but also defended the ad, saying it was intended to reach pregnant teenagers. “Walsall Integrated Sexual Health worked hard to make sure the communication was relevant, effective and focused,” said Nicola Wenlock, Divisional Director of Midwifery, Gynaecology and Sexual Health for Walsall Healthcare NHS Trust, who went on to say:

We apologise if this has raised a concern, the intent was to raise awareness of emergency contraception and advice available for those in this age group who wish to avoid unwanted pregnancies. The campaign has played an important role in tackling teenage pregnancy and poor sexual health in our local area which has been reducing steadily year on year. We will continue to work closely with all audiences to ensure we offer the best possible services for them and will continue to review all materials closely for future campaigns.

Albany Rose, a post-abortive woman who is now a pro-life advocate, put together a video using submissions from hundreds of women who were angry about the ad and wanted to show that women can be mothers, while also rocking high heels and lipstick. The response to her request for photos was so overwhelming, she wasn’t able to use all of the photos sent in.

The ad is problematic on multiple levels: 1) It insinuates that women are shallow creatures, who care only for things like clothes, shoes, and makeup — and that women think these things are more important than children and families. 2) It paints children as life-ruiners, and mothers as frumpy, less attractive, and unable to continue to enjoy the things they love in life; children therefore need to be avoided at all costs. And 3) it makes light of the very real injustices women face that make them feel they cannot handle having a child. It is utterly mind-boggling that such an ad was allowed to go to print.