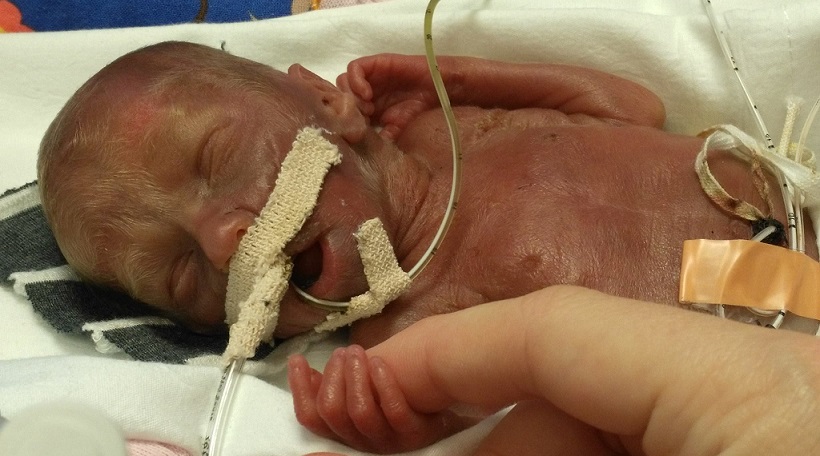 In the early morning hours of November 4, 2017, Megan Artman went into premature labor at just 22 weeks and five days gestation. She gave birth to her son Benson and doctors told Artman and her husband Tim that their micro-preemie son had just hours to live. Benson had other ideas and on April 26, 2018, he was released from the hospital after nearly six months. 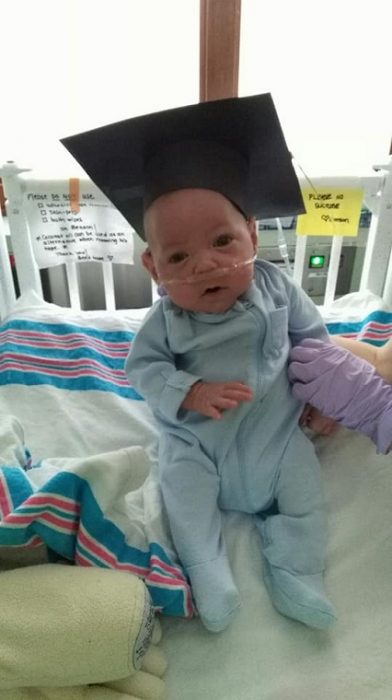 Baby Benson graduates from the NICU after being born at 22 weeks and 5 days gestation.

“We are very pleased to announce that our little tough guy graduated the NICU on Thursday,” his mother wrote on Facebook on May 2. “He made honors and was top of his class. (I added that last part, because srsly. The boy’s an overachiever.) After a 174 day stay and equally as many nights without his mother, the day finally came. And our hearts are so full… We went in, tied up a few final loose ends. And then we loaded up our boy, walked through that hall and out those doors. And we took our son HOME! Glory to God!” 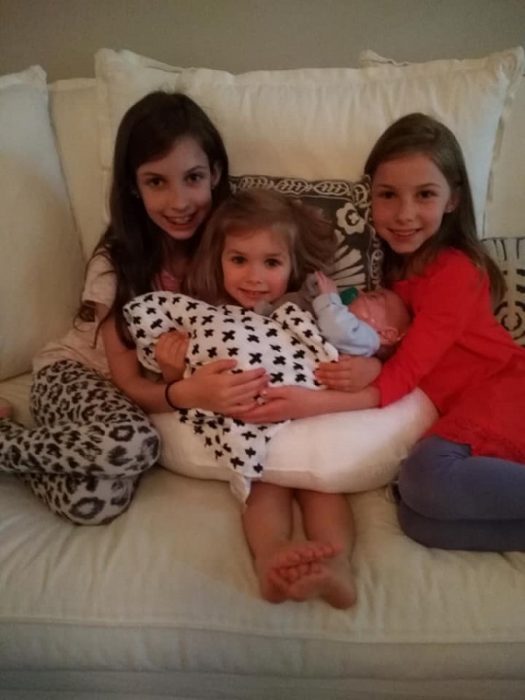 Baby Benson and his three big sisters celebrate his release from the hospital after his premature birth.

Benson was born weighing just one pound, two ounces. He was so premature that his eyes were still fused shut. Despite the grim prognosis doctors placed before him, Benson’s heart didn’t stop beating and his immature lungs kept going. He was left with his mother for five hours as doctors didn’t expect him to live and told her to hold her son as he died. But when the medical team saw what a fighter Benson was proving to be, they decided to help him and moved him to the neonatal intensive care unit. After 36 hours there, he was off oxygen and was showing small improvements.

“They all expected him to die within an hour but after going strong five hours after birth and still breathing consistently with a decent heartbeat, we told them we weren’t giving up on him,” Artman wrote on Facebook. “They tried to convince me to hold him til he died but we’re taking the neonatal route to intervene for his life. They’re making an exception for him because they’re all so shocked at how well he’s doing and they don’t usually even try for babies born quite this early.”

Artman said she could see that Benson’s heart rate readings were decent, and insisted on getting a breast pump and help in warming her son up. He was purple and cold. 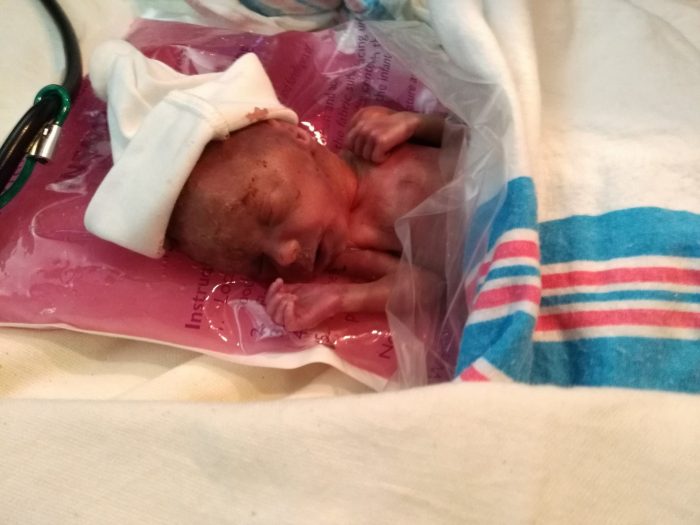 “They said he wouldn’t get warm because he wasn’t a viable baby,” wrote Artman. “I said God is the giver and sustainer of his life. He obviously wants to live so let’s help him do that. As much as I wanted to continue holding him, I handed him over to warm up on this warming gel pad. His color looked much better soon after. Praise the Lord!”

Doctors couldn’t explain why a premature baby like Benson wasn’t dying like they expected him to, with the neonatologist even telling the Artmans that there was “some lifeforce in him that they can’t explain with science.” 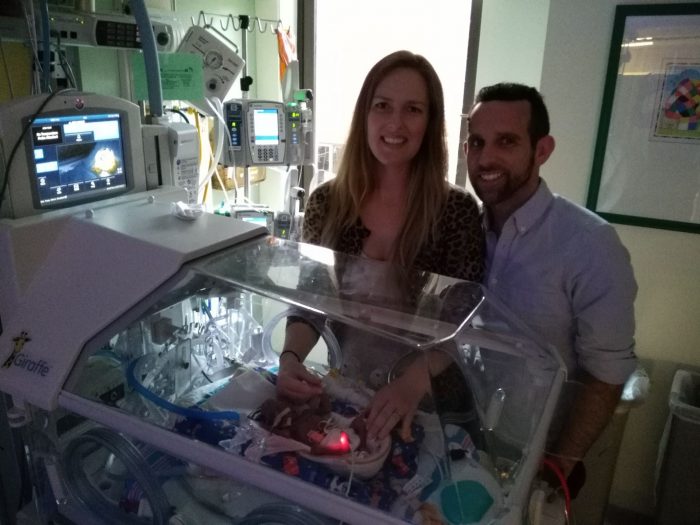 Tim and Megan Artman with Benson.

“No one can explain why he’s doing so well,” explained Tim Artman in a Facebook post, “but we know why. We’ve been speaking life over him since he was born.”

By his third day of life outside the womb, Benson was still in stable condition but a brain scan found what could be a brain bleed. A followup scan a few days later showed no change, which meant Benson did not have an active brain bleed – more good news for the family.

“He is very handsome with blonde hair,” Artman wrote. “He has been so sweet when we reach in to touch him. He leans into our hands when we get close, like he wants to be held.”

At one week old, Benson received a PICC line to replace the feed line to his stomach. Doctors attempted to remove him from the ventilator and place him on a CPAP; however, it ended up forcing him to work too hard and he was placed back on the bigger breathing tube, requiring the help of an oscillator to help his lungs fully open when he exhales. He began digesting breastmilk in small doses, something doctors weren’t expecting from a child his age and size.

“He’s still showing how strong he is, tolerating his care very well considering how tiny he is,” the family wrote on their GoFundMe page. “He did gain some weight (went from 520g to 550g in two days!) The next few days will be quiet for him, as he will only be routinely cared for. We are so happy with his progress, though it has been very stressful. We will continue to stay in faith, knowing God has heard our prayers and will strengthen Benson. All of the nurses around him call him the little ‘rock star’. They are all in awe of how well he is doing. God is good and faith works.”

Now at home with his family, Benson’s health continues to improve as he proves that life is always worth fighting for, even when it seems hopeless. While he still has to overcome some obstacles with his lung health, he is a miracle and a fighter.

“Benson’s first week home has been a dream…although, we haven’t had many of those lately,” his mother wrote on May 9. “Sleep is over-rated…at least right now, and for the next few weeks. We’re making up for lost time, and we are more than okay with that. It’s been such a joy having him with us. Ben is so sweet, happy, and easy to please. After 1 week home, our little tough guy is now 6 months old. 2 months adjusted. He is gaining well, smiling often, cooing occassionally and loving life. I think it’s safe to say, he likes it here.” 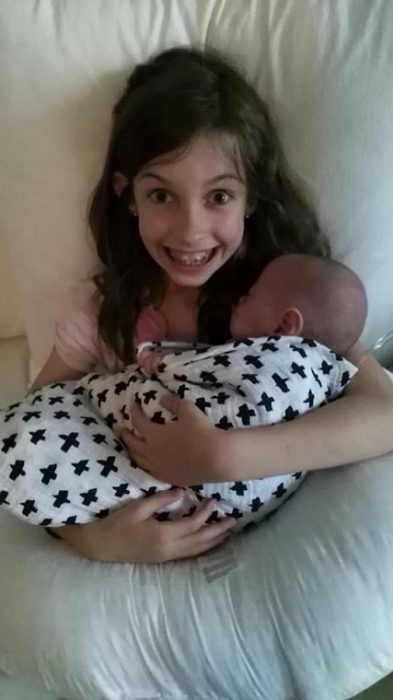 Benson’s big sister is overcome with joy that he is finally home after being born premature.

Benson was born nearly 18 weeks premature, but thanks to parents who refuse to give up on him and doctors who saw that he had a chance, he made progress every day and is finally at home with his three big sisters and his parents. He continues to amaze his doctors and nurses and has over 64,000 people rooting him on through the Facebook page his parents created for him.

He is also an example of the humanity of preborn children, showing that just because you are labeled a “fetus” while on the inside of the womb, doesn’t mean you aren’t a person deserving of your very right to life.