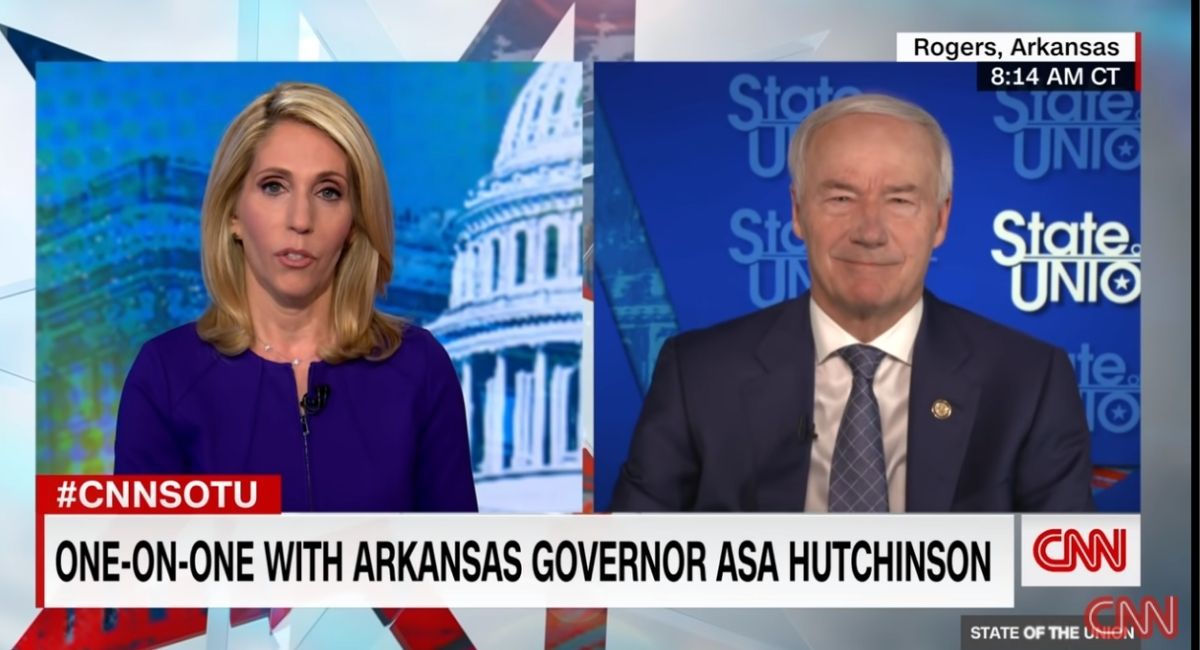 In a recent interview with CNN’s Dana Bash on “State of the Union,” Arkansas Governor Asa Hutchinson said that he believes the state’s near-total ban on abortion “could” be revisited and that he would prefer to add exceptions to allow abortion for rape and incest.

Hutchinson signed Arkansas’ “trigger law” in 2019. The law, which would go into effect should the Supreme Court overturn Roe v. Wade, bans all abortions except those committed to save the life of the mother (this is a fallacy — abortion is never medically necessary). Although Hutchinson signed the law, he did so with reservations, saying that he would have preferred that it include exceptions for rape and incest.

During the interview, Bash grilled Hutchinson on why the law doesn’t include exceptions for rape or incest. “I want to discuss the real-world implications of this,” she said. “Why should an 11- or 12-year-old girl who is impregnated by her father, or uncle or another family member be forced to carry that child to term?”

“I agree with you. I’ve had to deal with that particular circumstance even as governor,” Hutchinson replied. “While it’s still life in the womb, life of the unborn, it was, the conception was under criminal circumstances, either incest or rape, and so those are two exceptions I recognize, I believe are very appropriate, and what will happen as time goes on if Roe versus Wade is reversed, these are gonna become very real circumstances. I think the debate and discussion will be, will continue and that very well could be revisited.”

Bash pressed Hutchinson further on the issue, saying, “Governor, what if it can’t be? You wanted the legislature in Arkansas to put those exceptions in. They didn’t. Your term is almost up. What makes you think you can change it? And if you can’t, that means that women and girls — 11 and 12-year-olds — might be in this situation in a very real way in just a couple of months, potentially.”

Hutchinson conceded that those would be “heartbreaking circumstances,” later adding, “I believe that those exceptions are going to be important … overall to save lives because the public understands those exceptions, the importance of it. So I think that will be revisited.”

Hutchinson’s desire to revisit the law to make abortions more accessible in Arkansas would be a tragedy — especially since he clearly states his belief that there is life in the womb. Abortion is always the intentional homicide of an undelivered child, even when that child is conceived in rape or incest. The child has nothing to do with the circumstances of his conception, and those circumstances should not mean a death sentence for him. Instead, there should be harsher penalties for rapists and sexual abusers. Furthermore, Hutchinson’s claim that rape and incest exceptions will save lives is completely false, since every abortion ends an innocent life.

Rape is a horrible, violent act committed upon the mother. Abortion can never undo that trauma, and instead inflicts another kind of violence and trauma upon her. Many women have shared their regret at aborting their child after rape, with one conceding that “killing him did nothing to heal my pain.” Much should be done to help women and girls who find themselves in this situation, but abortion is never the answer.