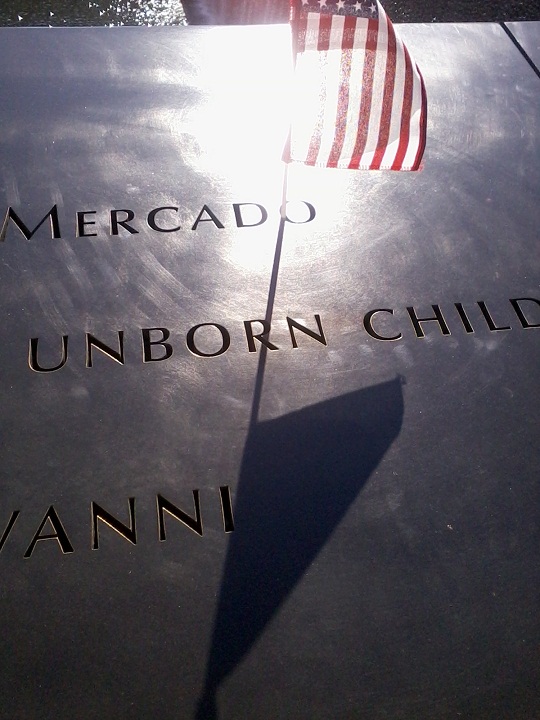 To remember the events of September 11, 2001, and the lives lost and shattered, I went to the 9/11 Memorial, one year after it was opened to the public, on September 12.

Also, if one knows where to look, one can see “And Unborn Child” listed with the name of the mother. “Unborn Child” does not appear when electronically searching for a name or affiliation of one of the fallen, but it is nevertheless touching to see some remembrance for the unborn lives lost in such terrible attacks.

A Newsday article from September 11, 2011, the 10th anniversary of the attacks and the day in which the memorial was open to family members of those lives lost, fortunately does list the mothers and their unborn children. Eleven pregnancies were known about and wished to be remembered by the families. The listings below of the names, location in the attacks, and hometowns is from the Newsday article:

Deanna Lynn Galante
32, of Staten Island
Died on 9/11 in the north tower, worked at Cantor Fitzgerald

Helen Crossin Kittle
34, of Lachmont
Died on 9/11 in the north tower, worked at Cantor Fitzgerald

Vanessa Lang Langer
29, of Yonkers
Died on 9/11 in the south tower, worked at Regus Plc

Patricia Ann Cimaroli Massari
25, of Glendale, Queens
Died on 9/11 in the north tower, worked at Marsh & McLennan Cos., Inc.

Renée A. May
39, of Baltimore, Md.
Died on 9/11 aboard American Airlines Flight 77, which crashed into the Pentagon, flight crew

Rahma Salie
28, of Boston
Died on 9/11 aboard American Airlines Flight 11, which crashed into Tower One of the World Trade Center, passenger

All loss of life that occurred as a result of the World Trade Center attacks is tragic, but there is a certain kind of tragedy involved in the deaths of those who had such great potential but died before they could be born. It is touching and fitting that the 9/11 Memorial remembers the lives of the unborn lost. Here in America, the deaths of unborn children are not always memorialized, but at least these 11 children can be remembered properly.