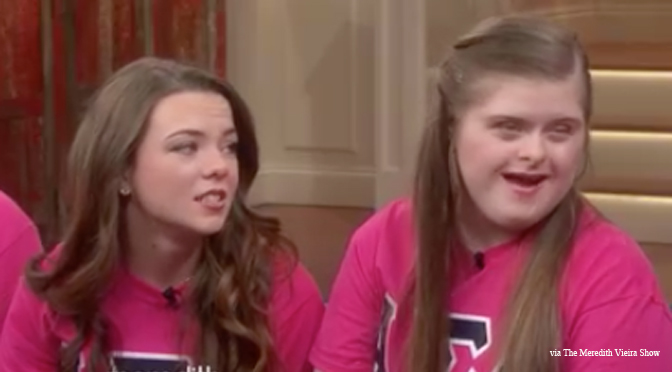 Alexis Cain has become the first member of a sorority at Murray State University in Kentucky to have Down syndrome. Her Alpha Sigma Alpha sisters say she has changed their lives for the better and it seems they have done the same for her.

Alpha Sigma Alpha at Murray State University made history, when Alexis Cain joined their sisterhood. As the first member…

Posted by The Meredith Vieira Show on Monday, October 5, 2015

“I always wanted to have sisters and so now I got them,” Cain told Meredith Vieira.

Though her parents, Brian and Camme Cain, weren’t at all surprised their daughter decided to join a sorority, her mother was apprehensive. Worried that someone might make comments about her daughter having Down syndrome, she soon realized that the sorority sisters saw Alexis as a person. She says the moment that Cain received her bid from Alpha Sigma Alpha was one of the best moments she would ever have. As a sister, Cain was assigned a ‘big’ or a big sister to help guide her. Her ‘big’ is Tori Wood, who has nothing but love to show Cain.

“I honestly cannot imagine my life without Alexis,” Wood told Vieira through tears. “She shows me how to be myself and she embraces who she is and she loves everyone else for who they are. […] She has helped me be the woman that I want to be. […] She reminds me of the beautifulness in life and the simplicity in life and how pure life is.”

As for Cain, she is thrilled to be a member of Alpha Sigma Alpha and loves so spend time with her sorority sisters because they have similar tastes in music and hobbies. She said that while she was choosing a sorority, she knew they were the one. They treat her as a human being, not a disability.

“They love me the way I am. My syndrome does not define me,” said Cain. “They really love me.”