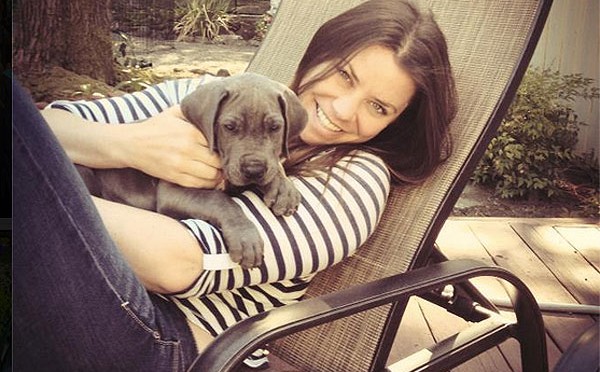 Dan Diaz, widower of Brittany Maynard, the 29-year-old woman with terminal glioblastoma multiforme brain cancer who took her own life on November 1, 2014, recently shared details of her death with Oprah Winfrey. Diaz is working on fulfilling a promise he made to his wife – to help pass so called “right-to-die” legislation in every state. In the interview, Diaz tells Oprah about Maynard’s last day of life.

Maynard had a mild seizure that morning. Her parents, family and friends were there. They took a walk with the dogs and shared their favorite memories with Brittany. Diaz told Oprah:

She just knew that it was her time – that the seizure that morning was a small reminder.

She would talk in terms of what she knew what she was risking. If the seizure comes, or worse yet, a stroke, and that affects her ability, her motor cognitive function that she cannot self-administer – because the patient has to drink, you know, its 4-5 ounces of medication – that was a real fear.

She would be trapped in her own body and she would then be forced to die exactly the way that she was trying to avoid.

Maynard and Diaz had moved to Oregon from California because of the Oregon Death with Dignity Act that lets terminally ill patients end their own lives. In Oregon said Diaz, “[Brittany] knew she could control the amount of suffering.”

Certain words stand out in Diaz’s interview: fear, control, suffering, avoid. None of these words are pretty.

The day before Maynard died, a woman named Maggie Karner, who is fighting the same cancer as Maynard, made a video message for her. No one could understand more than someone going through the same experience, so Karner told Maynard:

I understand the horrible fear that you’re facing. […] The loss of control. […] Brain cancer sucks in a really big way. It’s a beast that lurks and prowls, just waiting for the chance to take away more of our faculties, our everyday joys and our very life.

But, ya know what, death sucks, too. It rips us from the people and the passions that we love the most. […] If you take your life, the world will lose some of its beauty. […] Please don’t let cancer get one more second of your life. […]

Someone told me it’s almost like you’ve stepped out on a ledge and you’re ready to jump, but when that happens in real life, we try to talk to that person and we say, ‘No! No! Don’t jump.’ We try to explain to them why they’re valuable. Why we want them here longer. We tell them that there can be a better way.

But what would happen if society told that person, ‘[…] Jumping is the best solution for you?’ […] How about instead on November 1st, you and I choose to squeeze every drop out of life, and cheat this beast of a cancer for as long as we can? And who knows, maybe we can be part of a research trial that leads to a cure for us or others. And in the meantime we can spend precious moments with the people we love.

Karner goes on to share the story of her father becoming paralyzed and dying. She talks about the fact that all her father could do after his accident was talk. And that’s what they did. She says that she had never before had that kind of intimacy with her father. Karner says that she and her siblings learned so much about sacrifice and love, and that they grew as a family. She called it a gift from her father to have that time with him. She asked Maynard to give her own family that gift of caring for her in her cancer journey.

Maynard didn’t listen to Karner, but maybe Diaz will. If he truly doesn’t want others to have go through what Maynard did, then a perfect course of action would be helping to find better treatments and a cure for cancer.